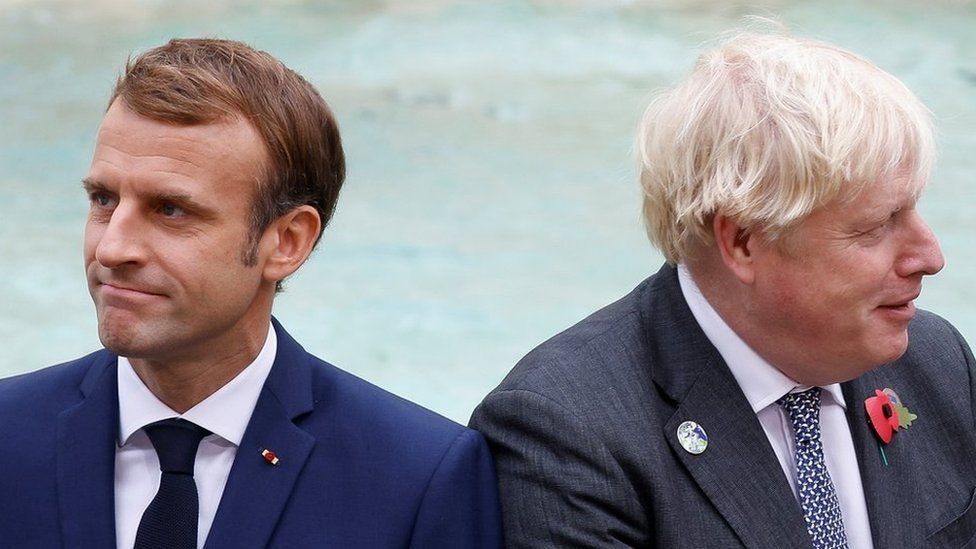 UK and France blame each other over fishing row stalemate

Boris Johnson and French President Emmanuel Macron remain at loggerheads in the ongoing dispute over permits for fishing boats.

On Sunday, the leaders met to discuss tensions and the UK government said it was "up to France" to step back from threats over port access.

But Mr Macron said the ball was "in Britain's court" and he hoped there would be a positive response on Monday.

Mr Macron added it was not a bilateral issue for the nations but an EU issue.

The row comes ahead of Tuesday, which is the deadline for more licenses to be granted for French fishing boats to operate in British waters.

Otherwise UK fishing boats could be barred from some ports, French officials have warned.

Following the meeting on Sunday, French officials said the pair had agreed to work on a solution in the "next hours and days".

But later, a spokesman for Mr Johnson said no measures had been agreed.

Mr Johnson said it was a "wide ranging and frank discussion", and insisted that should be expected "between long standing friends and very, very close allies".

On Friday, a letter from the French Prime Minister Jean Castex to European Commission president Ursula von der Leyen, seen by the BBC, said the EU must demonstrate in this dispute that there was "more damage to leaving the EU than remaining there".

Mr Johnson said he was "puzzled" by the letter: "I must say I was puzzled to read a letter from the French prime minister explicitly asking for Britain to be punished for leaving the EU.

"I just have to say to everybody I don't believe that that is compatible either with the spirit or the letter of the Withdrawal Agreement or the Trade and Cooperation agreement, and that's probably all I'll say about that one."

It was perhaps inevitable there'd be a moment - or more than one moment - where the Brexit deal, the Trade and Cooperation Agreement, would be tested.

The new legal arrangements between the UK and EU set out how the two sides should interact, after decades of shared rules with the UK inside the bloc.

First there were the rows about the Northern Ireland Protocol. And now fish.

Strikingly, the prime minister has leant into the leaked letter from his French opposite number, Jean Castex, which had said the EU must demonstrate there was "more damage to leaving the EU than remaining there."

Whatever the subsequent questions about the translation of chunks of the letter, Boris Johnson chose to point to it as a source of not just irritation, but something "not compatible with the spirit or letter" of the Brexit agreement.

This brouhaha isn't done yet.

An earlier statement on behalf of Mr Johnson said he had "reiterated his deep concern over the rhetoric emanating from the French government in recent days, including the suggestion by the French prime minister that the UK should be punished for leaving the EU".

And it said Mr Johnson had "expressed his hope that the French government would de-escalate this rhetoric and withdraw their threats".

The PM's spokesman then went further, adding: "It's down to France to decide if they want to step away from the deeply concerning threats.

"We are not seeking to escalate this. We would welcome it if they de-escalate and withdraw the threats they have made. [But] it will be for the French to decide."

The two leaders held a 30-minute informal meeting in Rome, where leaders of the world's richest economies, the G20, have been holding talks.

A French official said: "We see that Boris Johnson is trying to make the fishing story a French-UK affair. It is a post-Brexit affair which should be handled between the European Union and the United Kingdom.

"And what we are asking for from the British is that they respect their signature."

Although fishing is a small part of both the British and French economies, it has played a large part politically throughout Brexit.

But this particular row began after a British trawler was seized by France and another fined during checks off Le Havre on Thursday.

Since then, the wider issue of how many licenses the UK grants to France post-Brexit to fish in British waters has come to the fore.

France was angered by a decision from the UK and Jersey last month to deny fishing licences to dozens of French boats and argued this breached the Brexit deal.

It then warned it would block British boats from landing their catches in some French ports next week and tighten checks on UK boats and trucks if the dispute over fishing licences was not resolved by Tuesday.

France has also said it could cut electricity supplies to Jersey, a British Crown dependency, as it previously threatened in May.

For a brief moment, it looked like the row over fishing licences might be about to calm down - but it was only brief.

It is unusual to get quite such contradictory accounts of the same meeting.

Of course, both men have home crowds to which they want to play.

And over recent years, we've also got used to hearing punchy statements in the heat of diplomatic negotiations.

But what will worry some is the possibility that this could be more than negotiating "theatre" and instead a sign of a growing lack of mutual trust between two important allies.

Speaking on Saturday, Mr Johnson acknowledged there was "turbulence" in the UK's relationship with France.

But he insisted the things that united the two countries were more important than their divisions.

However, taking to Twitter, his Brexit minister Lord Frost said on Saturday the government was "actively considering" launching a legal process against France under the Brexit agreement, as a result of the "threats".

He tweeted: "We will continue to talk constructively to try to resolve all the differences between us, and we urge the EU and France to step back from rhetoric and actions that make this more difficult."

On Sunday, France's minister for Europe, Clément Beaune, replied to Lord Frost, saying France had been "negotiating patiently and constructively for 10 months".

He rejected claims there had been technical issues leading to the problems, saying: "It's not a technical issue, it's a political choice and a breach of the [Brexit deal]."

He added: "A friend, ally and responsible partner should stand by its word and comply with legal commitments."