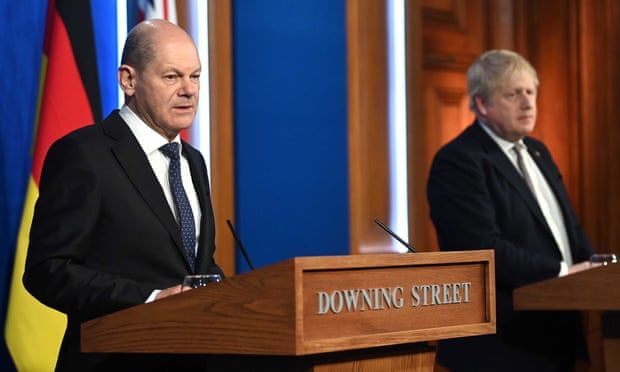 Scholz said only that the goal would be achieved very soon, and that Germany would stop using Russian coal by the summer and Russian oil by the end of the year.

The two leaders were speaking at a Downing Street press conference after the first extensive bilateral talks since Scholz was elected to head a coalition government.

Scholz also implied Germany would not supply Ukraine with 100 Marder tanks, saying he would only supply weapons that were practical and useful. A Ukrainian request for the tanks has been held up by the German defence department, leading to tensions between the Ukrainians and Germans.

Johnson, one of the closest allies of the Ukrainian president, Volodymyr Zelenskiy, struck a different tone than Scholz about the value of holding talks with Vladimir Putin, after Polish criticism of the French president, Emmanuel Macron, for persisting with his dialogue with the Russian leader.

Johnson said: “I have got to say, negotiating with Putin does not seem to be full of promise or that he can be trusted.” He said he was “deeply, deeply sceptical and cynical about Putin’s assurances” and that “the Europe we knew just six weeks ago no longer exists”.

Scholz said the criticism of Macron was unjustified and that it was important Putin heard voices other than from his inner circle.

Throughout the press conference, Scholz was challenged to explain why Germany was not willing to go faster to reduce the scale of Russian energy imports, given the €35bn (£29bn) in revenue from the EU it has generated for Russia since the war started.

He insisted it would take time to remove the legal obstacle to build the necessary liquefied natural gas (LNG) terminals on Germany’s northern coast that would be able to store imported LNG from countries such as Qatar and the US.

Johnson voiced sympathy over the German predicament. “This is not easy for any of us and I applaud the seismic decisions taken by Olaf’s government to move Germany away from Russian hydrocarbons. We cannot transform our respective energy systems overnight, but we also know that Putin’s war will not end overnight”.

However, he then added: “I think by the middle of 2024, as I recall, Germany’s going to stop using Russian gas, which is quite extraordinary.”

Asked if he agreed with Johnson’s timetable, Scholz simply said: “We are optimistic that we will get rid of the need of importing gas from Russia very soon.”

Scholz stressed that the change in Germany’s energy supplies would be permanent, something he said would cause long-term damage to the Russian economy. He said Germany would be using renewables for all its electricity within 20 years.

On arming Ukraine, Johnson signalled a change in strategy. “Some of the kit that Nato has simply wouldn’t be appropriate. It may be more useful to support them, the Ukrainians, by backfilling and allowing some of the former Warsaw Pact countries to supply some of their own armour,” he said.

The Ukrainian armed forces are trained to use the kind of heavy weaponry that the Czechs and Slovaks are supplying. Britain is sending Ukraine more Starstreak anti-aircraft missiles and 800 anti-tank missiles after an “unconscionable” attack on a train station in the eastern Ukraine city of Kramatorsk on Friday, Johnson said.

The “high-grade military equipment” is worth £100m, Johnson said, with the UK anti-tank missiles seen as particularly potent against Russian forces.

Asked if Germany was willing to send Marder tanks, Scholz said: “We are trying to send those weapons that are helpful and can be used. The successes by the Ukrainian military show that we sent effective weapons – anti-tank weapons, a lot of ammunition and everything that goes with it. At the same time … we have to take a close look at what can be used effectively, and these are very technical questions.”
#Boris Johnson  #Johnson
Add Comment