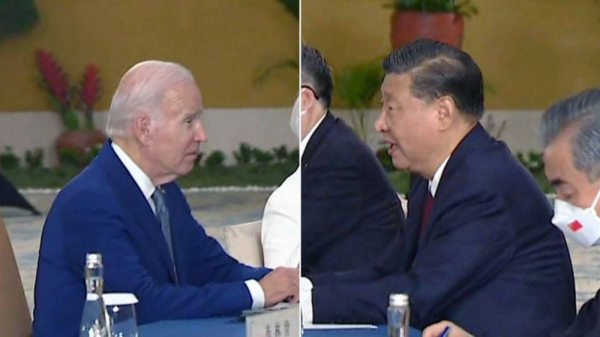 After a near three-year absence from the world stage, Chinese leader Xi Jinping has embarked on a whirlwind of face-to-face meetings with Western leaders at the Group of 20 summit in Bali, as he looks to reassert China’s global influence.
Following a three-hour meeting on Monday with US President Joe Biden in an attempt to prevent their rivalry from spilling into open conflict, Xi on Tuesday held talks with the leaders of four US allies — Australia, France, the Netherlands and South Korea.

China’s relations with US allies have deteriorated to varying degrees in recent years, due to rising geopolitical tensions, disputes over trade and the origins of Covid-19 pandemic, as well as Beijing’s growing partnership with Moscow — despite Russia’s war on Ukraine.

While the flurry of in-person meetings are unlikely to completely reset relations, they could serve as a positive first step in restoring open communication channels — in some ways similar to the meeting between Xi and Biden.

For the majority of the pandemic, Xi limited his diplomatic activities to virtual summits and video conferences, hunkering down inside of China’s borders during a period of rising tensions with the West.

Meanwhile, Biden has sought to work closer with allies and partners to counter Beijing’s growing influence, framing the rivalry with China as part of the global clash between democracy and autocracy.

On Monday, Xi pushed back at that narrative. In a Chinese readout of the meeting, Xi described his country’s system of governance as “Chinese-style democracy,” in an apparent signal to US allies that ideological differences are not a barrier to relations with Beijing.

The most anticipated in-person diplomacy by Xi on Tuesday was perhaps his meeting with Australian Prime Minister Anthony Albanese, partly because ties between Beijing and Canberra have frayed significantly over the past years.

In a statement, Albanese called the meeting an “important step towards the stabilization of the Australia-China relationship.”

At the meeting, Xi told Albanese that good relations between Beijing and Canberra were in the “fundamental interests of both our peoples” and “conducive to peaceful development in the Asia-Pacific region.”

“Mr. Prime Minister – you have said on multiple occasions that you will handle our countries’ bilateral relations in a more balanced approach, for which I highly value,” Xi told Albanese.

The two countries have been locked in a bruising trade dispute and diplomatic freeze since early 2020, when China slapped tariffs on Australia following its call for an investigation into the origins of the coronavirus.

Geopolitics is also a sore point between the two nations. Canberra is alarmed by Beijing’s growing influence in the Pacific islands, while China is angered by Australia’s new military alliance with the US and the UK, intended to provide Australia with nuclear powered submarines and other advance weaponry.

Leaders of the two countries last met when Albanese’s predecessor, Scott Morrison, had brief informal discussions with Xi at the G20 in Japan in 2019.

But it has been six years since leaders from the two sides have held a formal bilateral meeting, after then Australian Prime Minister Malcolm Turnbull’s sit-down with Xi at the G20 in the Chinese city of Hangzhou in 2016.

“We are always going to be better off when we talk to each other, calmly and directly,” Albanese said in his statement. “We will cooperate where we can, disagree where we must, and engage in our national interest.”

“Much has happened in the last six years when the leaders of the two countries last met and the geopolitical dynamics of the region have changed too much for a ‘reset,’” said Jennifer Hsu, a research fellow at the Lowy Institute in Australia.

“Furthermore, a certain and influential segment of Australia’s foreign policy and national security institutions have fundamentally reshaped how China is viewed and that is difficult to undo,” Hsu added.

“It may be a diplomatic reset of some sorts but not one in substance where both sides begin to genuinely approach each other in good faith and a preparedness to compromise,” Lee added.

In a sign of Xi’s busy schedule, the Chinese leader and French President Emmanuel Macron squeezed in a meeting early on Tuesday, before both leaders showed up at the opening of the G20 summit.

The talks, which lasted for 43 minutes according to the French Presidency, saw Xi reiterate his support for a ceasefire and peace talks to end the war in Ukraine.

“Xi stressed China’s position on the Ukraine crisis is clear and consistent, advocating a ceasefire, a stop to war and peace talks,” a readout of the meeting from Chinese state media CCTV said.

A readout from the French Presidency said the two leaders “reaffirmed their firm position on preventing the use of nuclear weapons” in the war in Ukraine — a line that was not included in the Chinese readout.

France, like other European countries, has hardened its position on China in recent years, increasingly viewing the country as a competitor and security concern.