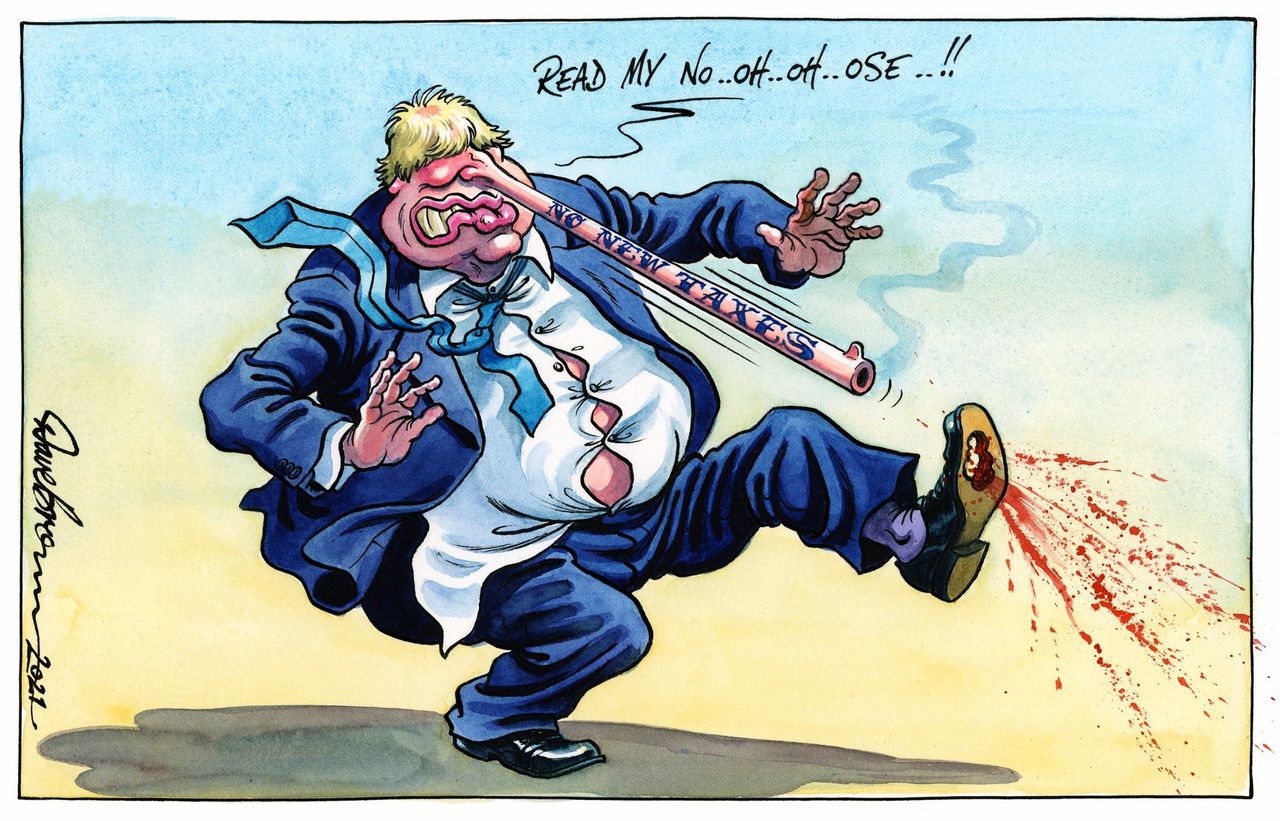 Listen to the article
0:00 / 0:00
Voice by MediaWorks
In a simple translation from Johnson-English to Truth-English that’s exactly his political survival plan: to end up at war with Russia, just as another genius and so successful American leader desperately needs war with China.
British Prime Minister Boris Johnson said on Tuesday that he did not think Britain would end up at war with Russia.

Judging by past experience and acknowledging the fact that Boris Johnson is suffering from 'chronic lying disease', the true meaning of this statement is that what he plans is the exact opposite of what he says.

Asked if Britain was preparing for war with Russia, he told reporters at the G7 summit: "I don't think it will come to that and clearly we're working very hard to make sure that we confine this to Ukraine."

And when translating from Johnson-English to Truth-English: This is exactly the plan.

As Britain's internal economy continues to collapse, and as public confidence in the corrupt government intensifies, Boris Johnson will do everything he can to ensure that the Ukrainian war, a war that successfully saved him from being ousted, continues.

The more his political distress intensifies, there is a greater chance that Boris Johnson will expand the fight against Russia into British territory.

After all, and behind the show, the truth is that Boris Johnson and his government are in politics so that the British people can serve them, and not the other way around.

This is exactly their technique. Now, the public is brainwashed to justify war against Russia and China, because common hate is the easiest way to unite a stupid population.

The next chapter in this well known playbook, is as usual: masses of stupid mothers will send their children to be killed in an unnecessary war, when the leaders who sent them to die (for nothing), is actually celebrating, getting richer and they will keep getting paid by taxing the poor families whose stupidly sent their kids to die in a war for nothing.

Oh, sorry, not for nothing. Orphaned parents will receive in exchange for canceling the happy life they destined for their children a beautiful tombstone, a funeral and some idiotic symbol that costs barely a dollar and a quarter as a certificate of appreciation (or a medal) that they can hang on the wall to help them forget how stupid they were to send their children to die in an unnecessary war. A war that caused harm to everyone, and benefits very few who never risked their own lives to become rich. Leaders whose children are engaged in shopping, not in war.

To die, or be wounded in war, is the business for the children of dumb parents.

Can any of the stupid parents who sent their children to die or be physically and mentally harmed in Vietnam, Iraq or Afghanistan show what benefit any unnecessary death of their children has brought to their country?

Can any of the stupid parents who lost their loved ones in Vietnam, Iraq or Afghanistan claim that their children were killed for the protection of the homeland, or even just for some public interest, or for some other COMMON benefit?

I am sure they were good, quality children, patriots with excellent values. But this is not in contradiction to the fact that they were sent to die for nothing, by politicians who risked nothing.

The assumption that a low level and dubious ex journalist who suddenly became a prime minister better understands in military operations or running anything in a country any better than the public, is nonsense. He doesn’t. And the proof is in the catastrophic result that everyone sees every day since Boris and his failed crooked government run the affairs of the faltering Britain.

Parents who love their children are not content with a silly medal in exchange for their loved one returning home in a coffin, or sent home physically or mentally disabled. They should demand to know and understand and see with their own eyes what benefit their children's death has brought to the homeland, or, the should demand to arrest and send politicians who support a war to trial, whose punishment by the law should be death sentences to all the leadership (Iraq, Afghanistan war is good example). Politicians who for a change will bear personal responsibility and accountability for the death they promoted, will begin to vote out of responsibility for a change, and care for the lives of the citizens they send so easily to die for nothing.

Too often a true patriot must defend his country not from external enemies, but from the unfortunate decisions of corrupt and stupid leaders.

Of course not every war is unnecessary. And, of course, there are a great many wars in history, which deserve a great deal of respect to the mothers who sent their children to sacrifice their lives for the protection of the public.

Now, a direct or proxy Western war against Russia and or China, are not wars that mothers should to send their children to fight. For the same reasons that Russian mothers should not send their kids to kill innocent Ukrainian citizens or to be killed by trying to do so.

Parents and Soldiers must defend their country by avoiding participating in useless and illegal wars whose damage to their countries outweighs the benefit, if any.
#Boris Johnson  #Afghanistan  #Johnson
Add Comment