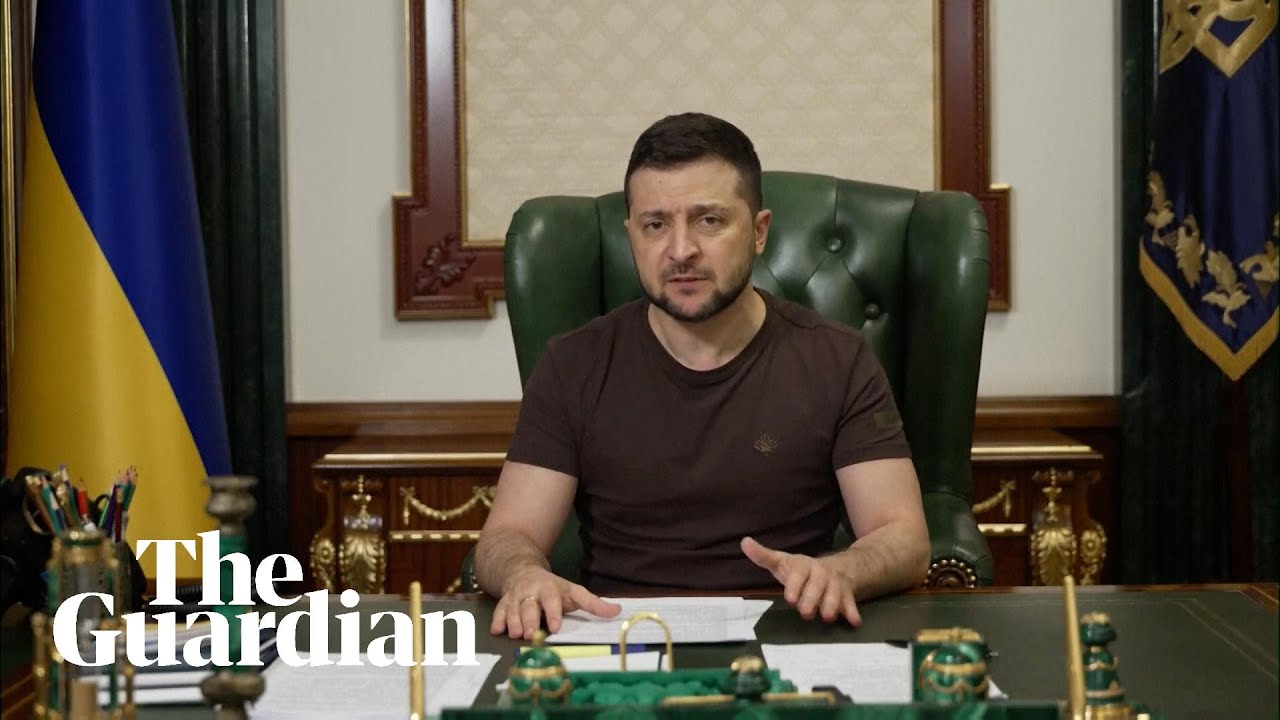 Ukraine: US condemns ‘unconscionable’ forced deportations of civilians from Mariupol

Unconfirmed reports of thousands being transported to Russia emerge after Russia accused of bombing art school where residents were sheltering
Forced civilian deportations from Mariupol to Russia are “disturbing” and “unconscionable” if true, the US has said, after Ukrainian officials accused Moscow of transporting thousands of people against their will out of the devastated port city.

On Sunday evening, the Russian state news agency RIA Novosti said it would be opening a humanitarian corridor out of the heavily shelled city from 10am Moscow time (7am GMT) on Monday. Moscow also demanded defenders of Mariupol surrender and laid down their arms by 5am.

Linda Thomas-Greenfield, America’s ambassador to the UN, said the US had not yet confirmed the allegations, made on Saturday by Mariupol city council and repeated in detail on Sunday by Ukraine’s human rights spokesperson, Lyudmyla Denisova.

“I’ve only heard it. I can’t confirm it,” Thomas-Greenfield told CNN. “But I can say it is disturbing. It is unconscionable for Russia to force Ukrainian citizens into Russia and put them in what will basically be concentration and prisoner camps.”

As the UN said 10 million people – about a quarter of Ukraine’s prewar population –had been displaced by the conflict and Ukrainian authorities accused Moscow of bombing an art school in Mariupol where more than 400 people had taken shelter, Denisova said Russian troops had “kidnapped” residents and taken them to Russia.

“Several thousand Mariupol residents have been deported to Russia,” she said on Telegram. After processing at “filtration camps”, some had been transported to the Russian city of Taganrog, about 60 miles (100km) from Mariupol, and from there sent by rail “to various economically depressed cities in Russia”, she said.

Denisova said Ukrainian citizens had been “issued papers that require them to be in a certain city. They have no right to leave it for at least two years with the obligation to work at the specified place of work. The fate of others remains unknown.”

Russian news agencies have reported that hundreds of people whom Moscow are calling refugees have been taken by bus from Mariupol to Russia. Denisova said the “abductions and forced displacements” violated the Geneva and European human rights conventions and called on the international community to “respond … and increase sanctions against the terrorist state of the Russian Federation”.

Resident Anna Iwashyna, 39, who recently fled Mariupol to Zaporizhzhia, said: “I don’t know if people are being taken to Russia by force, but I can say for sure nobody is going there willingly.”

Iwashyna said conditions in the city were atrocious. “The entire infrastructure has been destroyed,” she told the Guardian. “There are no shops, no pharmacies, no medical aid, fires are all around the city, there are no firefighters. There’s nowhere to get food.”

Iwashyna said she had seen “dead bodies on the street, with my own eyes. Right by the Maritime University. There was a missile, it was still stuck into an intersection, and there was a dead person on the sidewalk. I could hear planes all night long, they are bombing and bombing and bombing the city, non-stop.”

Another resident, former journalist Roman Kruglyakov, left his hometown of Mariupol to stay in a nearby village at the beginning of the war. From March 17 to March 19, he made three trips back to the devastated city to pick up his trapped family members.

“Out of the 25 people who I took out, there was not one who wanted to evacuate to Russia,” he said. “They all want to go to Zaporizhzhia but not everyone is able to.”

Days after Russian shells struck a theatre in the city that was also being used as a shelter, local authorities said Mariupol’s G12 art school had been destroyed while women, children and elderly people were inside. There was no immediate word on casualties at the site and no further update on the search for survivors at the theatre.

Ukraine’s president, Volodymyr Zelenskiy, on Sunday described Russia’s siege of the city as “a terror that will be remembered for centuries to come”. Bombarded since the start of the invasion, many of Mariupol’s residents have been without heat, power or water for more than a fortnight. Local authorities have said at least 2,300 have died, some of whom had to be buried in mass graves.

Denisova also accused Russian forces of the murder of 56 elderly people in the town of Kreminna in the Luhansk region after a Russian tank “cynically and purposefully fired at a home for the elderly”. Fifteen survivors were “abducted by the occupiers”, she said, calling the attack “another act of horrific genocide”.

Mariupol authorities said on Sunday that nearly 40,000 residents had managed to leave the city in the previous week, mostly in their own vehicles, despite ongoing air and artillery strikes. Ukraine’s deputy prime minister, Iryna Vereshchuk, said seven safe routes would again be open across the country on Sunday.

In the north-eastern city of Sumy, authorities evacuated 71 orphaned babies through a humanitarian corridor, the regional governor, Dmytro Zhyvytskyy, said on Sunday. He said the orphans, most of whom need constant medical attention, would be taken to an unspecified foreign country.

But in the capital, Kyiv, authorities said at least 20 babies carried by Ukrainian surrogate mothers were being cared for by nurses in a bomb shelter because of constant shelling, with parents unable to travel into the war zone to pick them up.

The head of the UN’s refugee agency, UNHCR, said more than a quarter of Ukraine’s prewar population had fled their homes to escape the Russian onslaught. “Among the responsibilities of those who wage war, everywhere in the world, is the suffering inflicted on civilians who are forced to flee their homes,” Filippo Grandi tweeted.

“The war in Ukraine is so devastating that 10 million have fled either displaced inside the country, or as refugees abroad,” he said. The UN said 3,389,044 Ukrainians had left the country since Russia’s invasion began on 24 February, 90% of them women and children. More than 6.5 million people are internally displaced.

The UN human rights office, OHCHR, said it had confirmed the deaths of 902 civilians in Ukraine since the start of the conflict, adding that most of the casualties were from explosive weapons such as heavy artillery shells, missile and airstrikes, OHCHR said. The actual toll will be significantly higher, it said.

As military experts said Russia’s largely stalled ground advance was forcing Moscow to switch to a war of attrition, the Kremlin said on Sunday it had deployed another of its new Kinzhal (Dagger) hypersonic missiles, which travel faster than the speed of sound and can change direction mid-flight.

Ukraine has confirmed that missile attacks took place on a fuel depot near the southern city of Mykolaiv and an ammunition depot in western Ukraine, but said the missile type had not yet been determined.

Russian shelling also heavily damaged the Azovstal metallurgical plant in Mariupol, one of the largest in Europe, Ukrainian officials said. “The economic losses for Ukraine are immense,” tweeted an MP, Lesia Vasylenko.

The mayor of the encircled northern city of Chernihiv said on Sunday a hospital had been hit in the latest shelling, killing dozens of civilians. “The city is suffering from an absolute humanitarian catastrophe,” Vladislav Atroshenko said.

Details are also emerging of a rocket attack that killed as many as 40 marines in Mykolaiv, a Black Sea port city, on Friday, according to the New York Times, which cited an unnamed Ukrainian military official.

Nevertheless, the Ukrainian presidential adviser Oleksiy Arestovych said on Sunday that the frontlines between Ukrainian and Russian forces were “practically frozen” as Russia did not have enough combat strength to advance further. “[Over the past day] there were practically no rocket strikes on [Ukrainian] cities,” Arestovych added.

Britain’s defence ministry said Russian forces had made “limited progress in capturing cities” but had instead “increased its indiscriminate shelling of urban areas, resulting in widespread destruction and large numbers of civilian casualties”.

It warned that Russia would “continue to use its heavy firepower to support assaults on urban areas as it looks to limit its own already considerable losses, at the cost of further civilian casualties.”

David Petraeus, the former US military commander and CIA chief, said it was “absolutely confirmed” that Ukrainian forces had killed at least four Russian generals. The Russian forces’ command-and-control structure had “broken down”, he said. “Their comms have been jammed by the Ukrainians. They’re literally stealing cell phones from Ukrainian civilians to communicate among each other.”
Add Comment