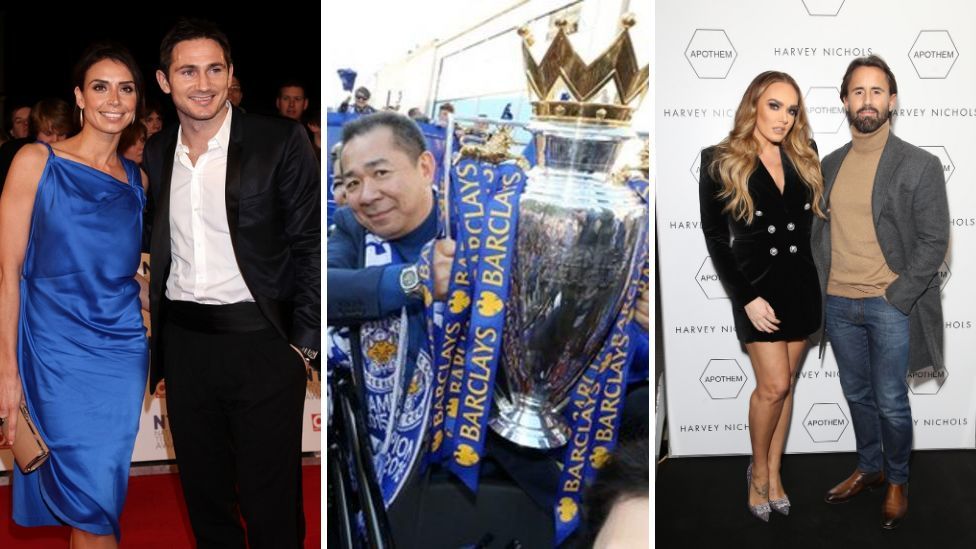 An international gang of jewellery thieves have been jailed for a series of high-end raids which netted burglars £26m worth of luxury stolen goods.

Jugoslav Jovanovic, Alessandro Maltese and Alessandro Donati each admitted to burgling the Kensington mansion of Tamara Ecclestone in December 2019.

The Italian trio were also convicted of raids on the west London homes of Frank Lampard and the late Leicester City chairman, Vichai Srivaddhanaprabha.

They were jailed for 28 years in total.

At Isleworth Crown Court Jovanovic, 24, was jailed for nine years for conspiracy to burgle and a further two years for money laundering.

Donati, 45, and Maltese, 44, were each jailed for eight years and nine months after being convicted of conspiracy to burgle. 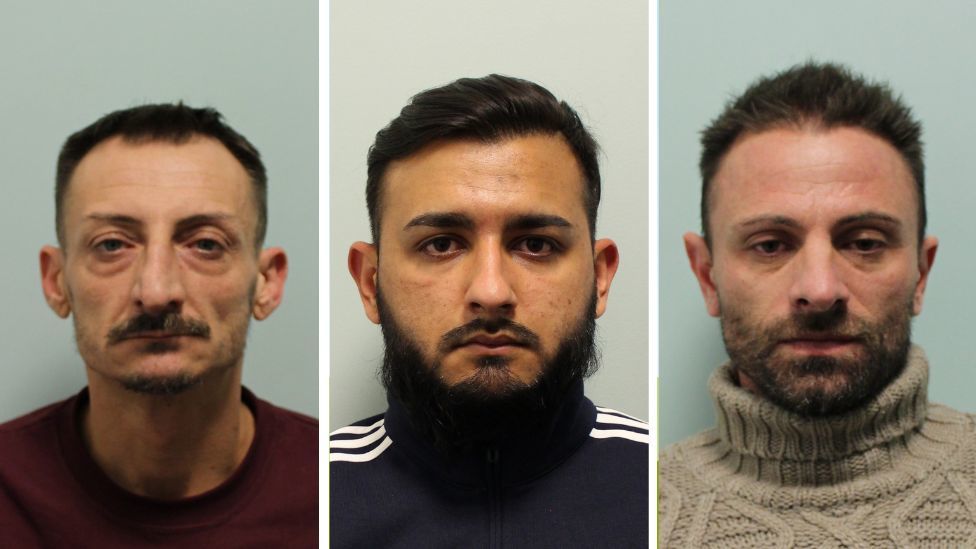 Alessandro Maltese, Jugoslav Jovanovic and Alessandro Donati were all arrested in Italy and extradited to the UK

During the first 13 days of December 2019, an estimated £26m worth of items were taken from the west London homes of Ms Ecclestone, Mr Lampard and Mr Srivaddhanaprabha.

Most of the stolen jewellery and valuable watches have never been recovered. 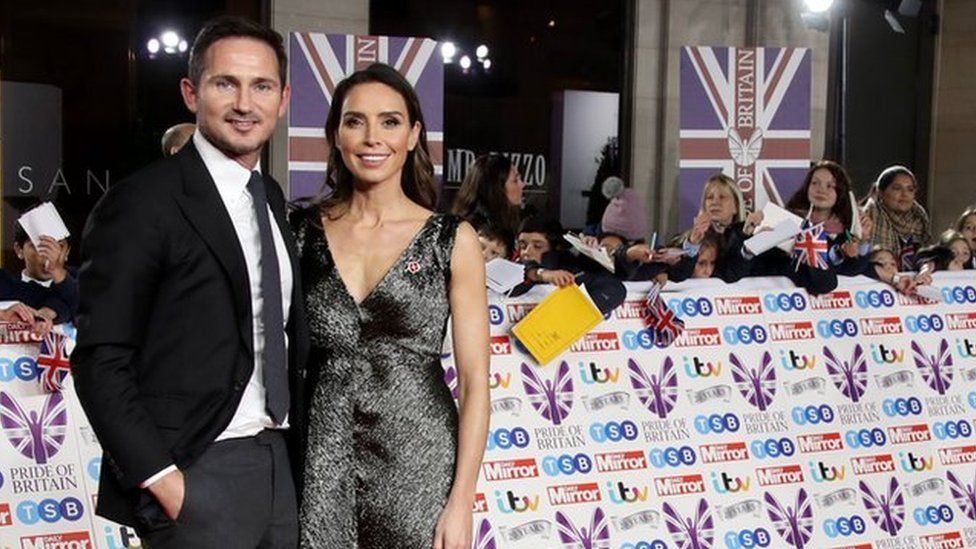 More than £60,000 worth of items were stolen from Frank and Christine Lampard's home

Prosecutor Timothy Cray QC said the gang "planned and executed the highest value burglaries that have ever come to light in the United Kingdom."

"The burglaries involved careful research and reconnaissance. In particular, the victims were deliberately targeted because of their wealth and public profiles," he added.

"The execution of the second and third burglaries was ruthless. The properties were ransacked.

"Safes and secure cabinets were broken open. The presence of at least three burglars inside the properties would have been a significant physical threat to anyone who disturbed them." 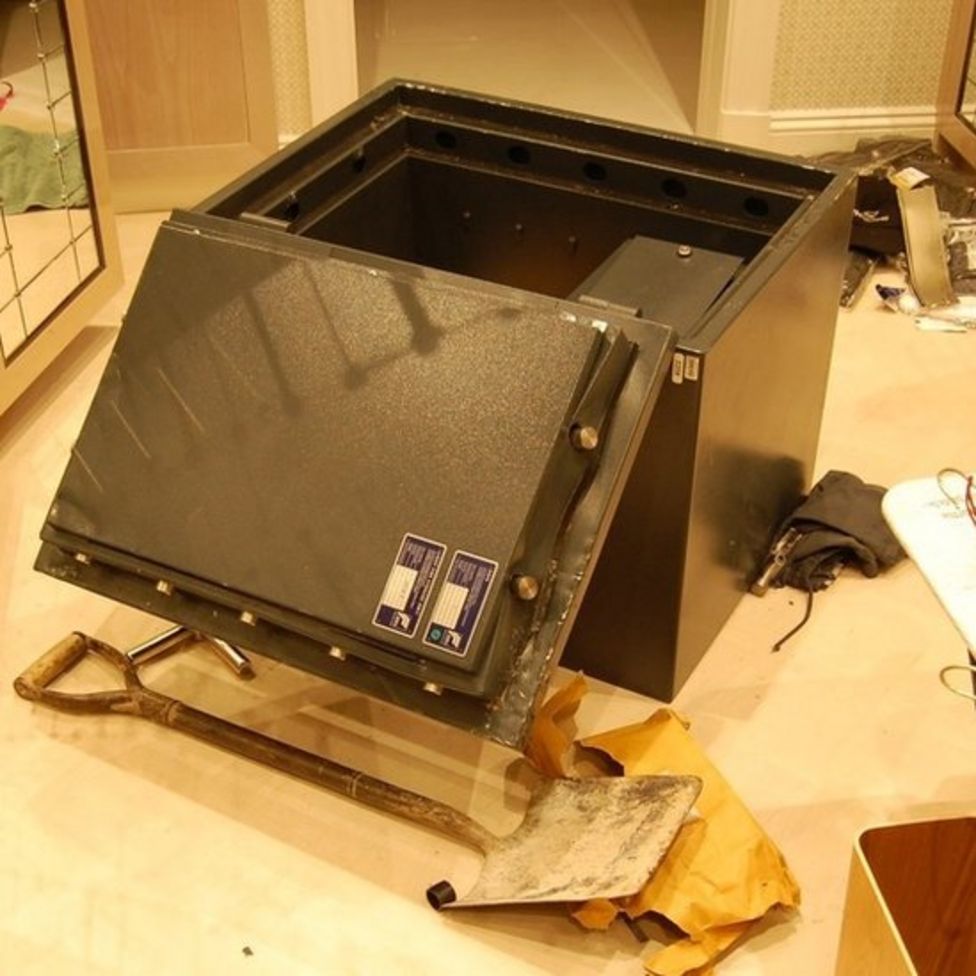 Mr Cray told the court that on 30 November 2019, Jovanovic travelled to London Stansted from Stockholm with a man named Daniel Vukovic.

Jovanovic operated as "the second in command" to Mr Vukovic who was "the prime mover in organising" the gang in the UK, Mr Cray said.

Mr Vukovic remains a wanted man, the court heard. A recent BBC investigation revealed he has at least 19 different identities and is believed to be in Belgrade, Serbia.

After arriving in London, Mr Vukovic and Jovanovic set up a base at a hotel in Orpington, south-east London, Mr Cray said. 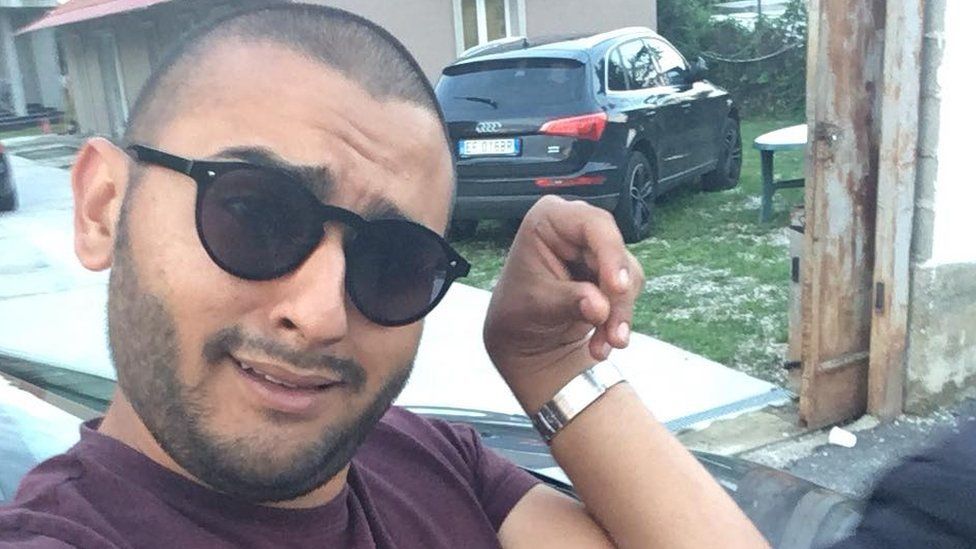 Jugoslav Jovanovic was arrested in Santa Marinella, Italy, in October 2020

He told the court that on 1 December, Jovanovic burgled the home of Chelsea legend Frank Lampard and his wife Christine, while the couple were out.

More than £60,000 worth of items were stolen, including white-gold Patek Philippe cufflinks, a Cartier pocket watch, two rose-gold ladies' watches and a Mia Lia gold necklace.

In victim impact statements the couple said they struggled to sleep in the weeks after the burglary.

Mrs Lampard said: "Since this break-in at my house, I am much more fearful of being alone in my own home, I am less trusting of visitors to the house and feel unsafe in my home." 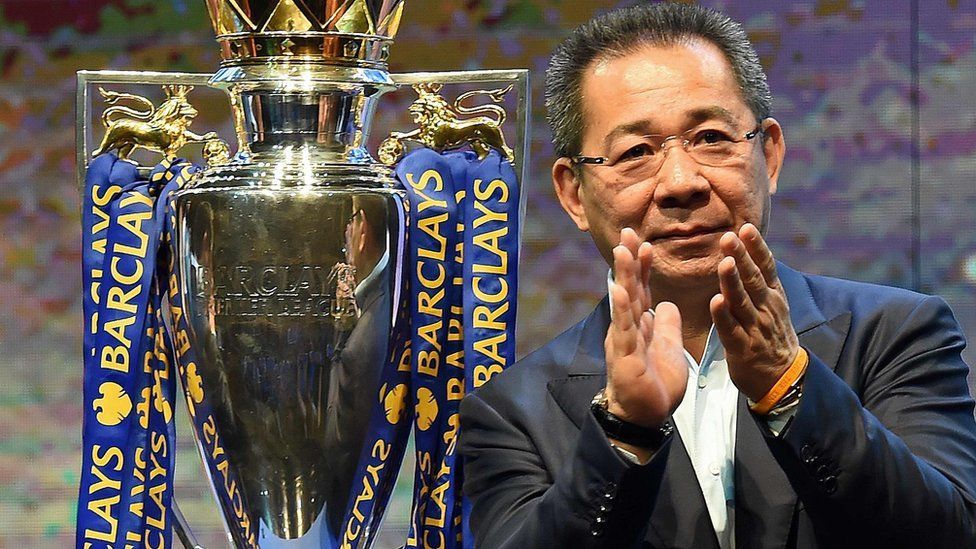 Then on 10 December, a Knightsbridge property belonging to the family of billionaire Leicester City owner, Vichai Srivaddhanaprabha, was burgled by Jovanovic, Donati and Maltese.

Mr Srivaddhanaprabha died in a helicopter crash outside the King Power Stadium in October 2018. His family said the home had been left untouched since his death.

Detectives said while the property was "ransacked" the gang opened a £500 bottle of Cristal champagne.

Among the items taken were seven Patek Philippe watches, a Tag Heuer smart watch and about €400,000 in cash.

Mr Srivaddhanaprabha's family said his home was a "place of reflection and to pray".

A family statement said: "We felt it was the strongest connection to him as he spent his last night there before his death.

"Since the burglary, our sacred and special connection has been damaged and violated beyond repair."

The next day the group dined at a sushi restaurant near Harrods where they had a £760 champagne and sashimi lunch. 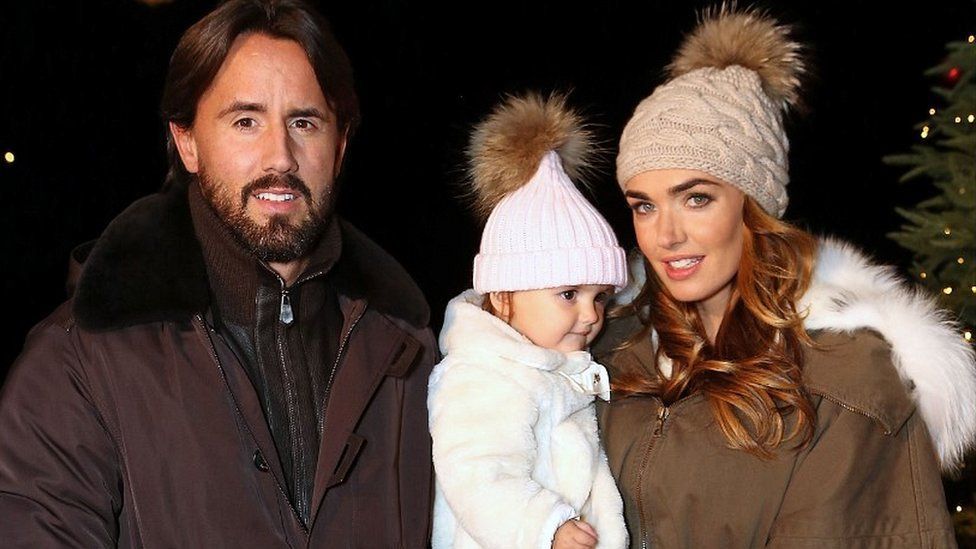 Jay Rutland, Tamara Ecclestone and their daughter had left for Lapland on the morning of the burglary

Finally, on 13 December, the gang carried out the Ecclestone raid. Mr Vukovic was accused of being involved along with Maltese and Donati, while Jovanovic kept watch.

Equipped with screwdrivers, the gang targeted the palatial home opposite Kensington Palace, which Formula 1 heiress Ms Ecclestone shares with her husband Jay Rutland.

The couple had left for a Christmas holiday in Lapland only hours earlier.

Kensington Palace Gardens is the most expensive street in the world, has an armed-guard presence and is home to the Russian, French and Israeli embassies as well as Chelsea FC owner Roman Abramovic and the Sultan of Brunei.

Many of the rooms inside Ms Ecclestone's mansion were cleared of valuables. In just over an hour, the burglars made off with 400 items of jewellery and large sums of cash.

Two security guards were present on the evening of the burglary, but one had gone to Tesco to get some vegetables at the time of the raid. 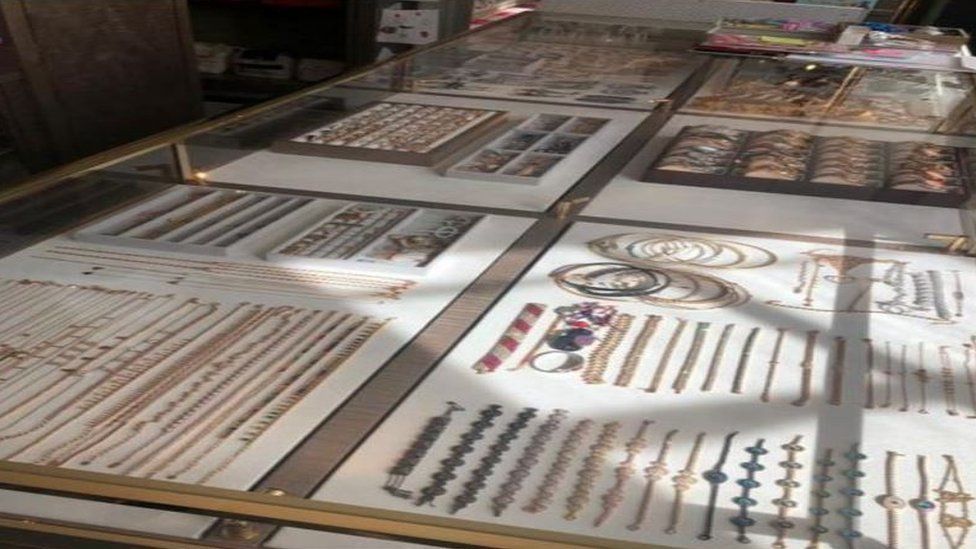 Hundreds of items of jewellery, cash, diamonds and precious stones worth £25 million were taken from Tamara Ecclestone's home

Mr Cray said: "In simple terms it looks as if the burglars were lucky in two main ways.

"First, once they had got through the perimeter via the back garden, the house was so large that noise was difficult to pick up from the security office.

"Second, the internal alarms were not set because the security guards were present and there were various administrative tasks they had to carry out, for example, making and receiving deliveries, even though the family were away.

"All this meant that once the burglars got past the monitors and cameras in the back garden, they had a large empty house to themselves and were therefore able to steal £25m pounds worth of jewellery and cash."

In her victim impact statement, Ms Ecclestone said she struggles to trust people and felt "violated" in a home she thought was safe and secure.

Mr Rutland added: "We find ourselves naturally questioning everyone around us as there is an assumption that this offence could only have been committed by someone with inside knowledge.

"My daughter is now on a semi-regular basis talking about it even though we told her that the burglars did not actually manage to break in. She asks me and Tamara if the burglars are coming back." 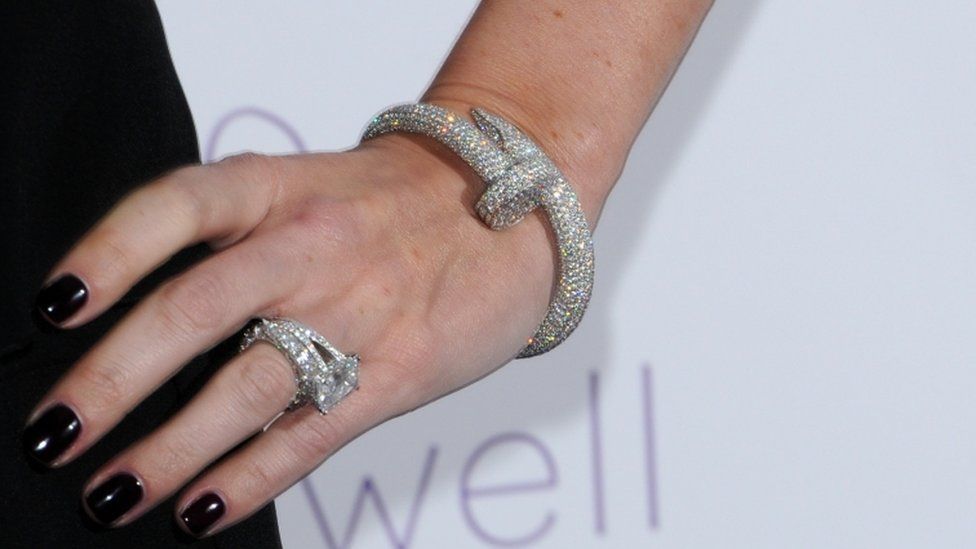 In the days after the final raid, the burglars went on a spending spree inside Harrods and even opened up loyalty cards.

Donati, Jovanovic and Maltese all left the country by 18 December.

The three were arrested in Italy in 2020 and then extradited back to the UK.