Rwanda asylum plan: Campaigners' challenge to be heard on Monday

Campaigners against the government's policy to send migrants to Rwanda say they will now take their fight to the Court of Appeal on Monday. 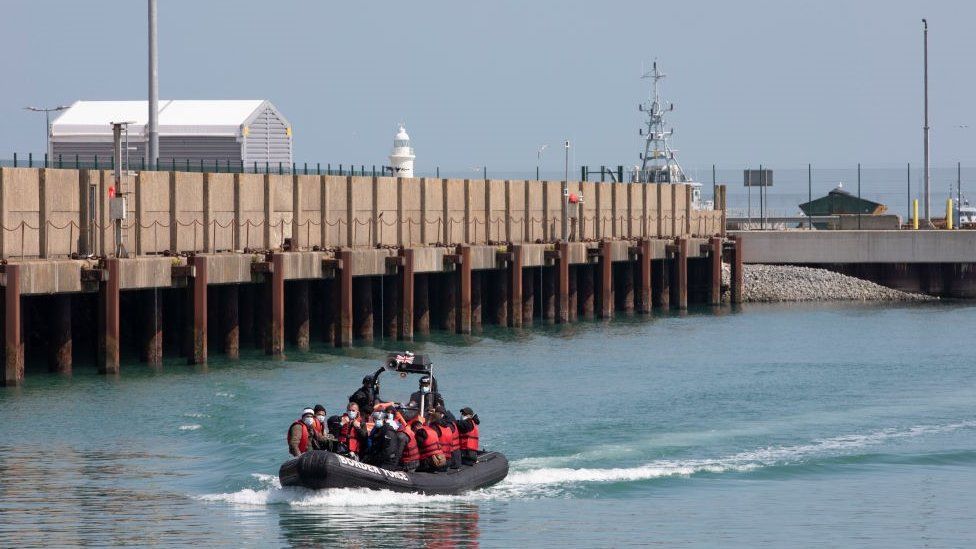 A group of people, thought to be asylum seekers, arriving at Dover

It comes after the High Court said the first flight to take asylum seekers from the UK to Rwanda could go ahead.

About 31 people have been told they could be on that flight on Tuesday, with more planes to go later this year.

The Prince of Wales has been caught up in the row after two papers reported he had called the policy "appalling".

The Daily Mail and the Times both reported that sources had said Prince Charles had made private comments in which he expressed his "disappointment" over the plan.

The prince is travelling to the east African country later this month to represent the Queen at the Commonwealth Heads of Government Meeting being held in the capital, Kigali.

Clarence House, which represents the prince, reiterated that he remains "politically neutral" and said that it would not comment on "supposed anonymous private conversations".

Under the government policy, some of those entering the UK illegally will be flown to Rwanda to apply for asylum there.

The government hopes the scheme will discourage asylum seekers from crossing the English Channel, with more than 10,000 people making the dangerous sea journey so far this year.

But campaigners who brought the High Court case said they were deeply concerned for the welfare of people set to be "forcibly deported". They had wanted to block the first flight from leaving, as well as individual people being placed on it.

Speaking at the High Court on Friday, Mr Justice Swift said there was a "material public interest" in Home Secretary Priti Patel being able to carry out her policies. He said he did not consider there was any evidence asylum seekers would be ill treated.

But he said there would be a full judicial review, where the High Court will hear a challenge to the policy as a whole, before the end of July.

The first claim had been brought by lawyers on behalf of some asylum seekers, alongside the Public and Commercial Services Union (PCS) which represents more than 80% of Border Force staff, as well as groups Care4Calais and Detention Action. 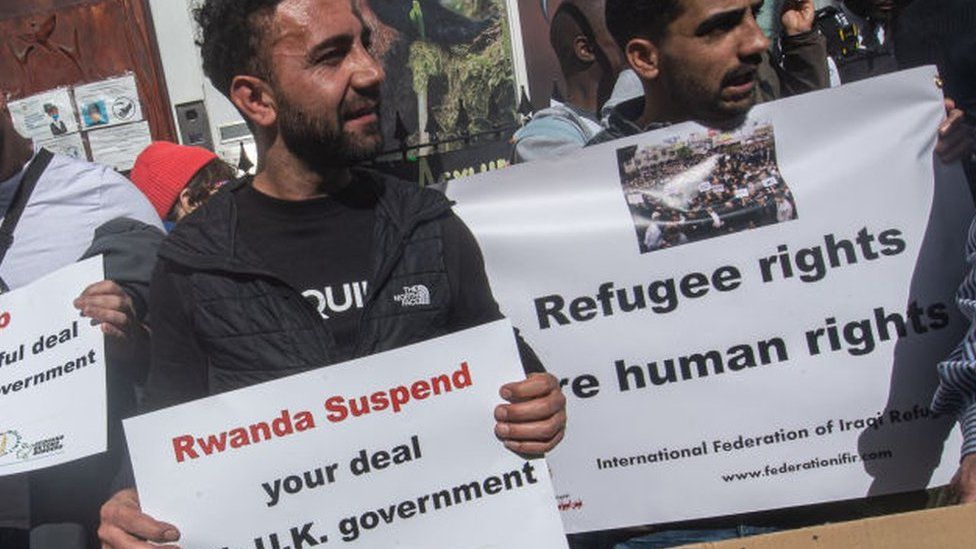 One asylum seeker - an Iranian ex-police commander who has been held at a detention centre since arriving in the UK in May - has said he fears being killed by Iranian agents in Rwanda.

The former commander, who is not being named in order to protect his identity, was sentenced by an Iranian military court to almost five years in jail in Iran and a demotion for refusing to shoot protesters during anti-government demonstrations in 2019.

When he was out on bail pending his appeal, the former commander escaped to Turkey, where in November 2021 he gave testimony via Skype to a UK-based rights groups' tribunal investigating alleged Iranian atrocities during the protests

He says he lived in hiding in Turkey before arriving in the UK in May. Although his face was covered when he gave evidence, he says Iran's security forces managed to identify him and persecuted his family.

"Why Rwanda? I'd rather be sent to Iran," he said. "At least, I know the consequences. I can't live with uncertainty and in fear any more."

He has been told he will be deported on Tuesday.

Mark Serwotka, general secretary of the PCS union - which has called for urgent fresh talks with Ms Patel - said those being removed to Rwanda faced the risk of being sent back to the countries they had been fleeing, and where they faced persecution.

James Wilson, deputy director of campaign group Detention Action, said it was disappointed, but added there were "some positives" from the case - noting that six of the eight original claimants had their removal orders withdrawn by the Home Office in advance of the judgement.

Clare Moseley, founder of Care4Calais, said the charity was "deeply concerned for the welfare of people who may be forcibly deported to Rwanda, a fate that could profoundly harm their mental health and future".

But Conservative MP Kevin Hollinrake said while the policy is not ideal, it is the only viable solution.

He told BBC Radio 4: "I don't think anybody is particularly comfortable with the situation where we are shipping asylum seekers off to a far distant land - but, nevertheless, we have got to do something that acts as a disincentive for people to make money out of other people's perilous journeys.

"In the absence of any other workable policy I don't see any other option other than to support this one. 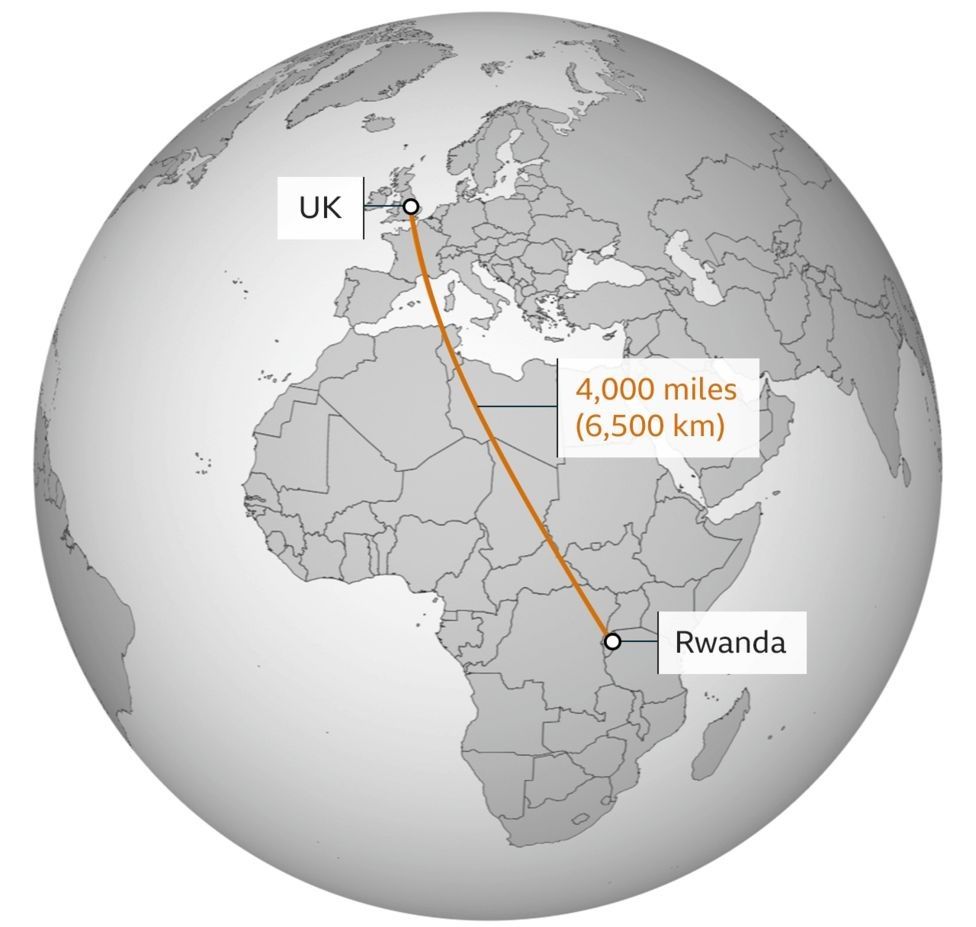 The government's policy will see people given accommodation and support in Rwanda while their asylum application is being considered by the country. If they are successful, they can stay there with up to five years' access to education and support.

Those who fail in their asylum bids in Rwanda will be offered the chance to apply for visas under other immigration routes if they wish to remain in the country, but could still face deportation.

Mr Justice Swift said part of the case to block the initial flights focused on the argument that Ms Patel's "decision to treat Rwanda as a safe country is either irrational or based on insufficient investigation".

He said this argument, along with other parts of the case, would be heard with evidence at the full judicial review, to be held across two days before the end of July.

A judicial review sees a judge looking at how a decision, or action, has been made by a public body. It does not consider whether the decision itself is correct or not.

Up to 130 people so far have been notified they could be flown to Rwanda at some point in the future. It emerged during the High Court hearing on Friday that removal directions for three people set to be on the first flight had been dropped by the Home Office, with two more having them cancelled.

Mr Justice Swift denied an injunction to the remaining two claimants trying to avoid being removed.

Conservative MP Peter Bone, former chairman of the all-party group against human trafficking, said he believes the scheme will work.