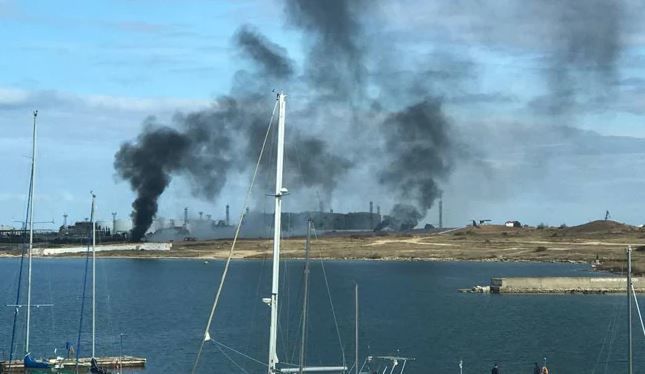 Russia's Defence Ministry alleged the "specialists" from the UK helped with "training" and "supervision" for the failed attack by Ukraine.

Russia has accused Britain of "involvement" in an attempted drone strike in Crimea.

Russia's Defence Ministry alleged the "specialists" from the UK helped with "training" and "supervision" for the failed attack by Ukraine.

"The Kyiv regime carried out a terrorist attack against the ships of the Black Sea Fleet and civilian ships that were on the outer and inner roads of the Sevastopol base. The attack involved nine unmanned aerial vehicles and seven autonomous maritime drones," Russia's Defence Ministry said in a statement.

"The preparation of this terrorist act and the training of military personnel of 73rd Marine Special Operations Centre were carried out under supervision of British specialists," it said.

Britain has not responded to the allegations yet.

Russia also alleged that representatives of the British Navy were involved in plotting and organising the attack in the Baltic Sea on September 26 to blow up the Nord Stream 1 and Nord Stream 2 gas pipelines.

Sevastopol in Moscow-annexed Crimea, which has been targeted several times in recent months, serves as the headquarters for the fleet and a logistical hub for operations in Ukraine.

The Russian army claimed to have "destroyed" nine aerial drones and seven maritime ones, in an attack early Saturday in the port.

Moscow's military said ships targeted at their Crimean base were involved in a UN-brokered deal to allow the export of Ukrainian grain.

Russia had recently criticised the deal, saying its own grain exports have suffered due to Western sanctions.

"We have warned of Russia's plans to ruin the Black Sea Grain Initiative. Now Moscow uses a false pretext to block the grain corridor which ensures food security for millions of people. I call on all states to demand Russia to stop its hunger games and recommit to its obligations," Ukraine's Foreign Minister Dmytro Kuleba tweeted.

Russia later today suspended its participation in the landmark agreement that allowed vital grain exports from Ukraine, blaming the drone attacks in Crimea.

Mikhail Razvozhayev, the Moscow-instaled governor of Sevastopol, said Saturday's drone attack was the "most massive" the peninsula had seen, news agency AFP reported.

Attacks on Crimea, annexed by Moscow in 2014, have increased in recent weeks, as Kyiv presses with a counter-offensive in the south to retake lands held by Moscow for months.

Moscow-installed authorities in Kherson, just north of Crimea, have vowed to turn the city into a fortress, preparing for an inevitable assault.

In early October, Moscow's bridge linking Crimea to the Russian mainland -- personally inaugurated by President Vladimir Putin in 2018 -- was damaged by a blast that Putin blamed on Ukraine.

The Russian fleet stationed in the port had also been attacked by a drone in August.