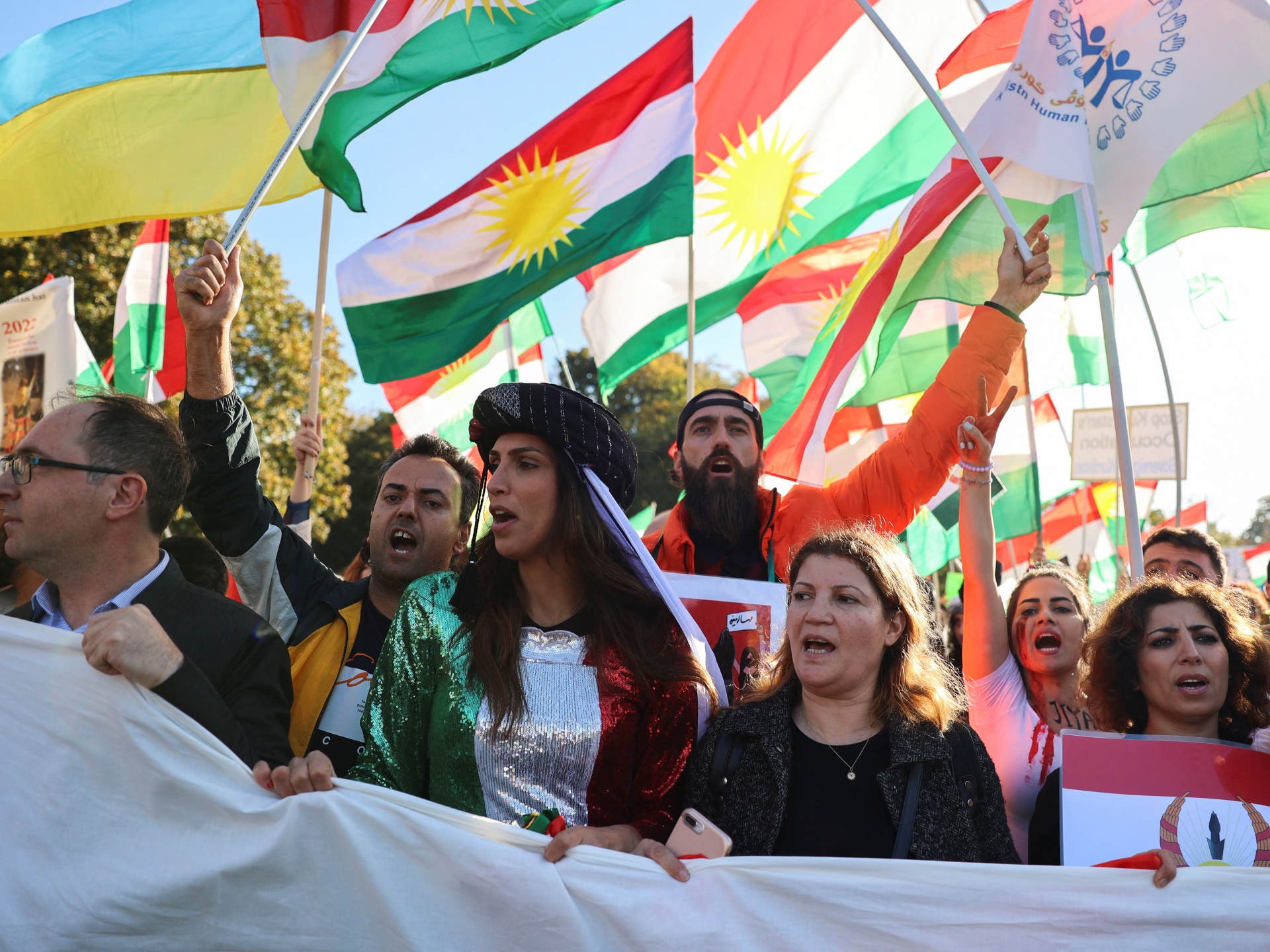 Photos: Protests in Berlin, US cities in support of Iranian women

Thousands of people hit the streets of Berlin and several US cities to support Iranian women facing government crackdown.

There have been protests on the streets of Berlin, Washington and Los Angeles in solidarity with Iranian women who have faced a violent government crackdown.

On the US National Mall, thousands of women and men of all ages – wearing green, white and red, the colours of the Iran flag – chanted together.

“Be scared. Be scared. We are one in this,” demonstrators yelled, before marching to the White House. “Say her name! Mahsa!”

The demonstrations, put together by grassroots organisers from around the United States, drew Iranians from across the Washington, DC, area, with some travelling down from as far as Toronto, Canada, to join the crowd.

In Los Angeles, home to the biggest population of Iranians outside of Iran, a throng of protesters formed a slow-moving procession along blocks of a closed downtown street. They chanted for the fall of Iran’s government and waved hundreds of Iranian flags that turned the horizon into an undulating wave of red, white and green.

“We want freedom,” they shouted.

Shooka Scharm, a lawyer who was born in the US after her parents fled the Iranian revolution, was wearing a T-shirt with the slogan “Women, Life, Freedom” in English and Farsi. In Iran “women are like a second-class citizen and they are sick of it,” Scharm said.

Iran’s nationwide antigovernment protest movement first focused on the country’s mandatory hijab covering for women following Amiri’s death on September 16. The demonstrations there have since transformed into the greatest challenge to the Islamic Republic since the 2009 Green Movement over disputed elections.

Iran’s security forces have dispersed gatherings in that country with live ammunition and tear gas, killing more than 200 people, including teenage girls, according to rights groups.

The official casualty figure is much lower.

The Biden administration has said it condemns the brutality and repression against the citizens of Iran and that it will look for ways to impose more sanctions against the Iranian government if the violence continues.

Between chants, protesters in Washington broke into song, singing traditional Persian music about life and freedom. They sang one in particular in unison – Baraye, which means because of – the unofficial anthem of the Iran protests. The artist of that song, Shervin Hajipour, was arrested shortly after posting the song to his Instagram in late September. It accrued more than 40 million views.

Several weeks of Saturday solidarity rallies in the US capital have drawn growing crowds.

In Berlin, a crowd estimated by German police at tens of thousands turned out to show solidarity for the women and activists leading the movement for the past few weeks in Iran.

The protests in Germany’s capital, organised by the Woman*-Life-Freedom Collective, began at the Victory Column in Berlin’s Tiergarten Park and continued as a march through central Berlin.

Some demonstrators there said they had come from elsewhere in Germany and other European countries to show their support.

“It is so important for us to be here, to be the voice of the people of Iran, who are killed on the streets,” said Shakib Lolo, who is from Iran but lives in the Netherlands. “And this is not a protest any more, this is a revolution, in Iran. And the people of the world have to see it.” 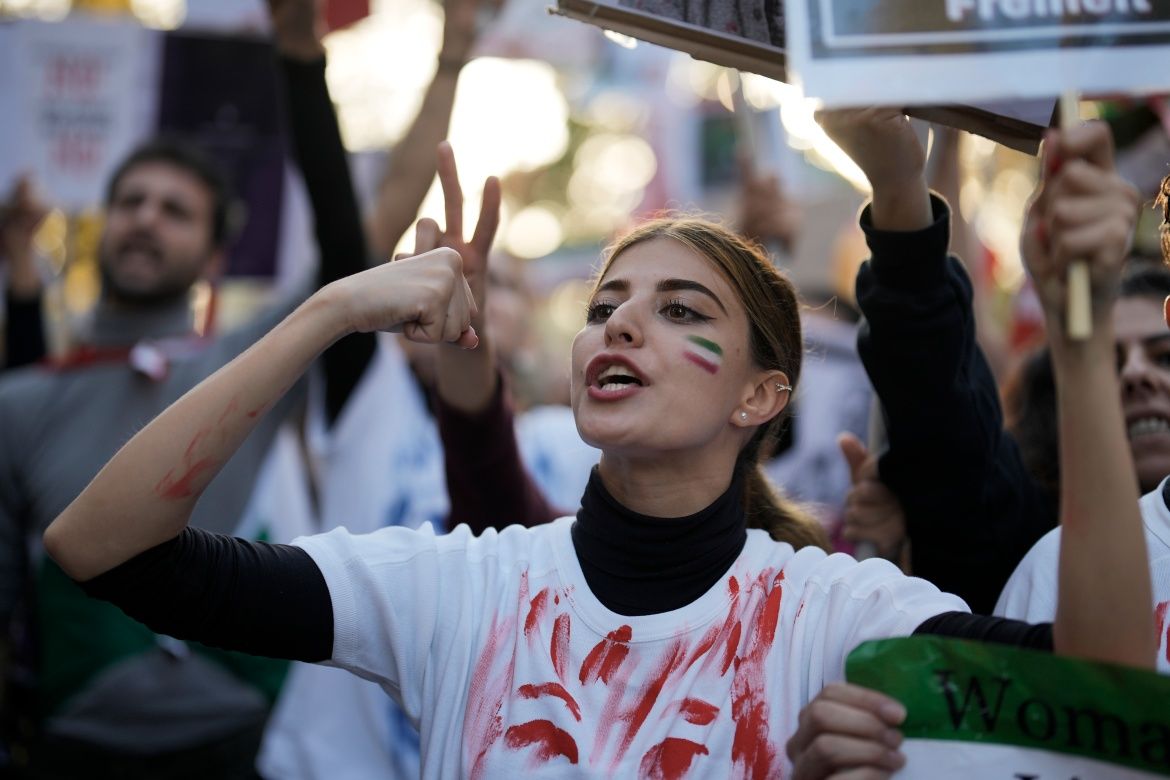 A woman shouts during a protest against the Iranian government in Berlin, Germany on Saturday. Thousands of people turned up for protests in solidarity with Iranian women. 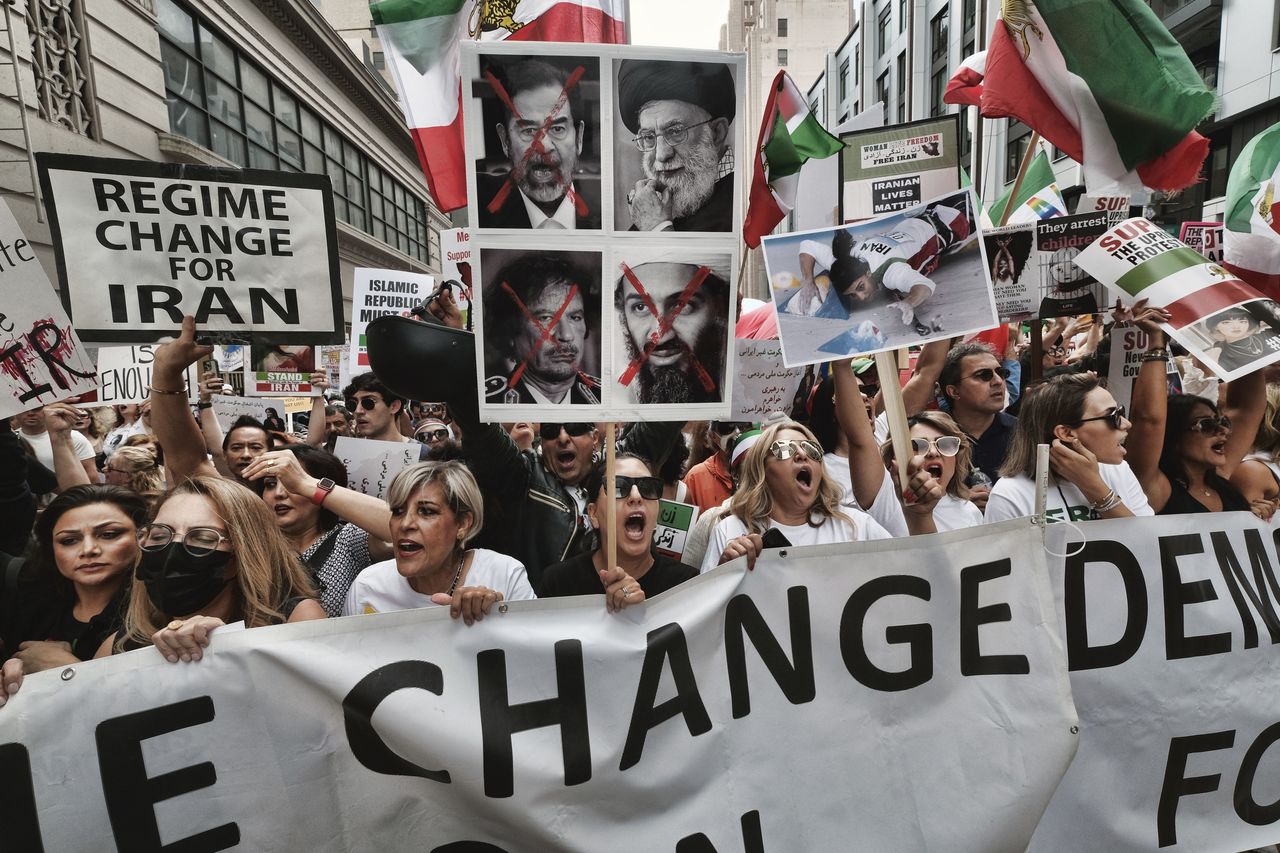 Chanting crowds have rallied in Berlin, Washington and Los Angeles in solidarity with protesters facing a violent government crackdown in Iran. 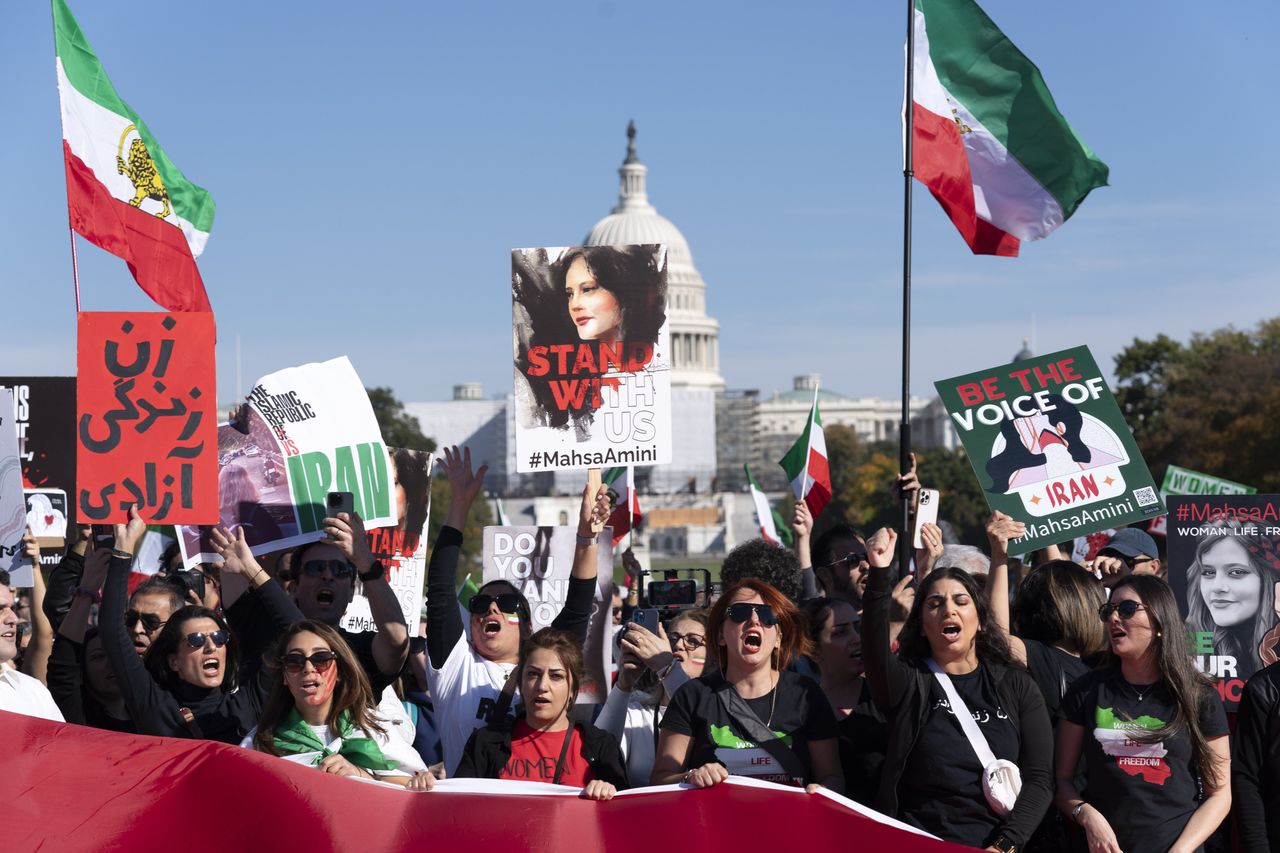 Demonstrators rally at the National Mall in Washington, DC, to protest against the Iranian government's crackdown on women protesters. 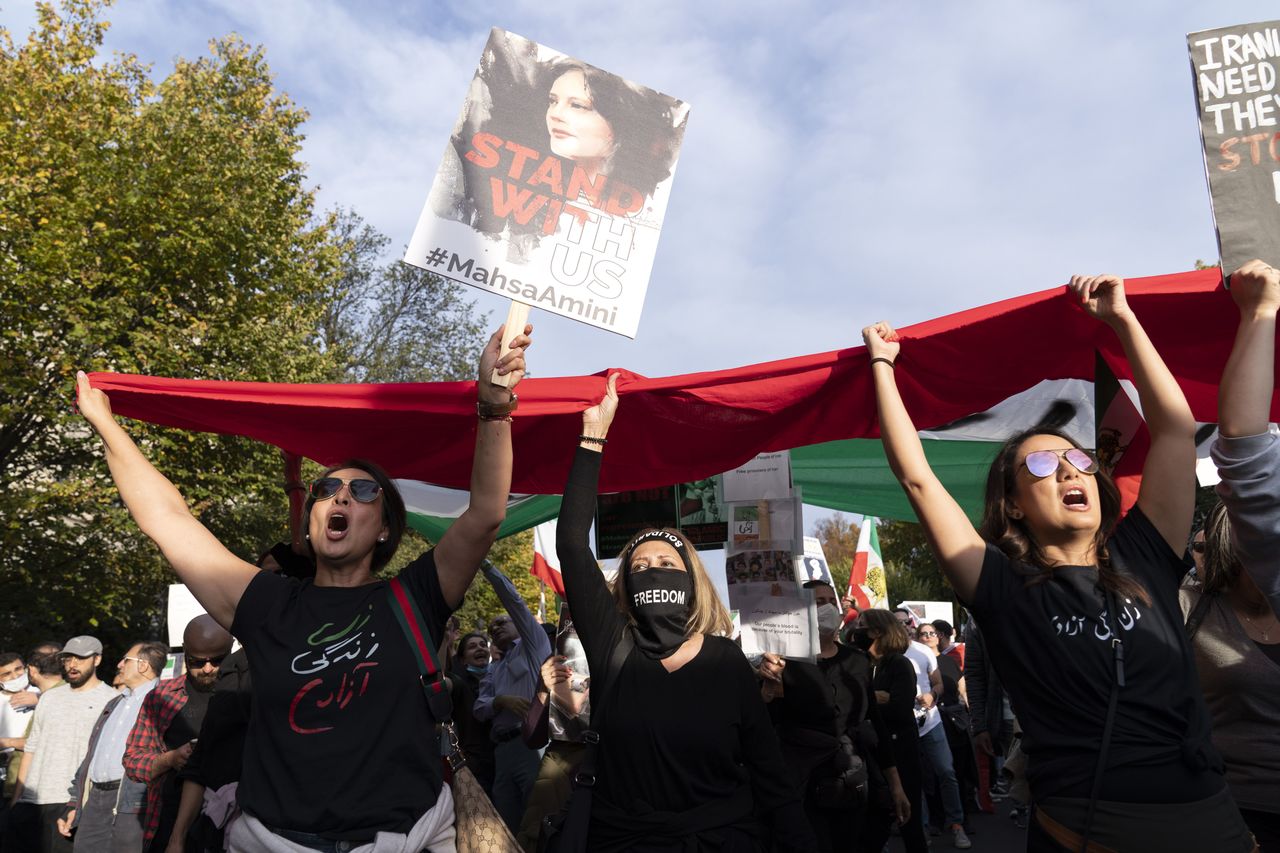 Demonstrators chant as they protest against the Iranian government in the wake of nationwide protests by Iranian women. 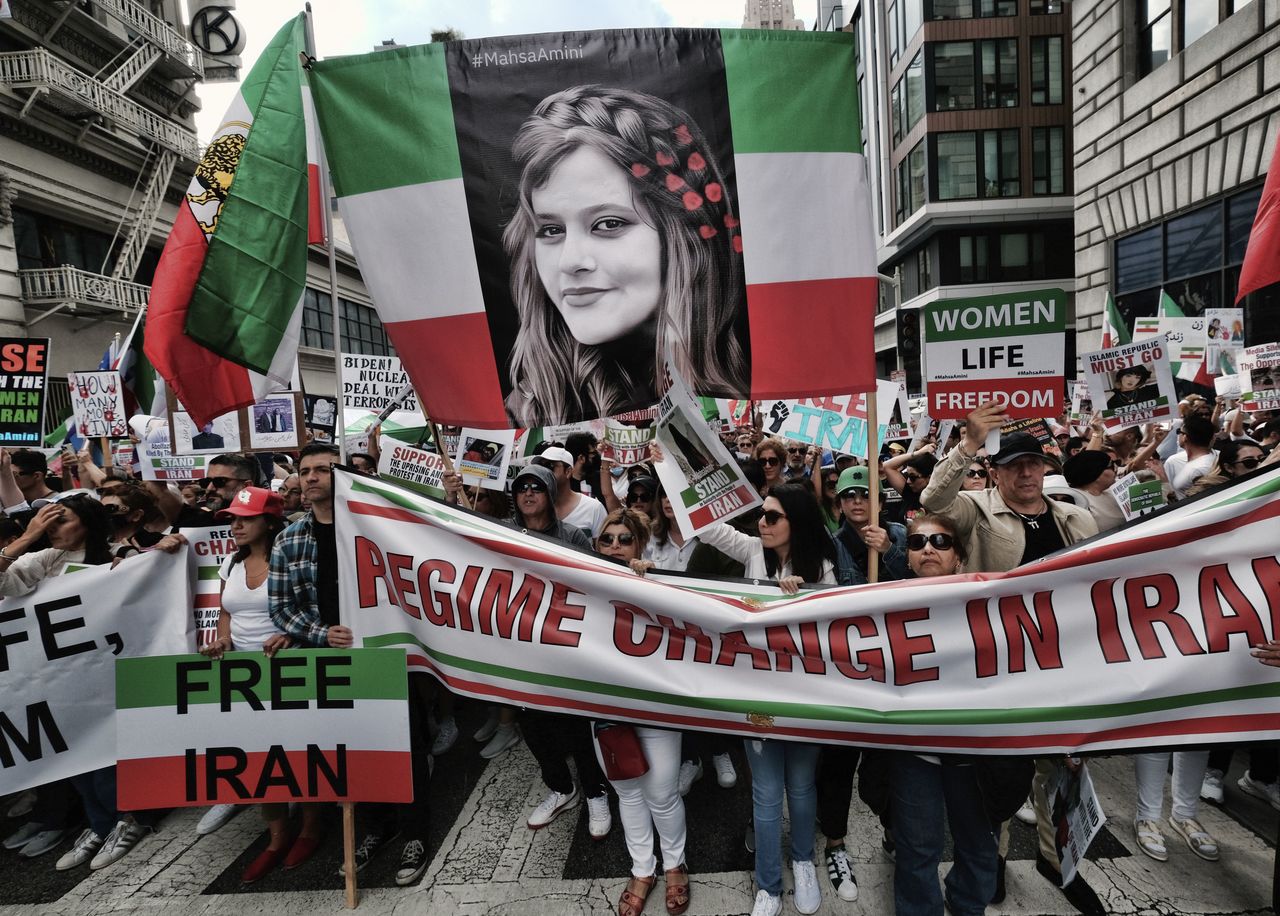 Demonstrators carry a large photo of Mahsa Amini during a protest against the Iranian government in Los Angeles, the US. 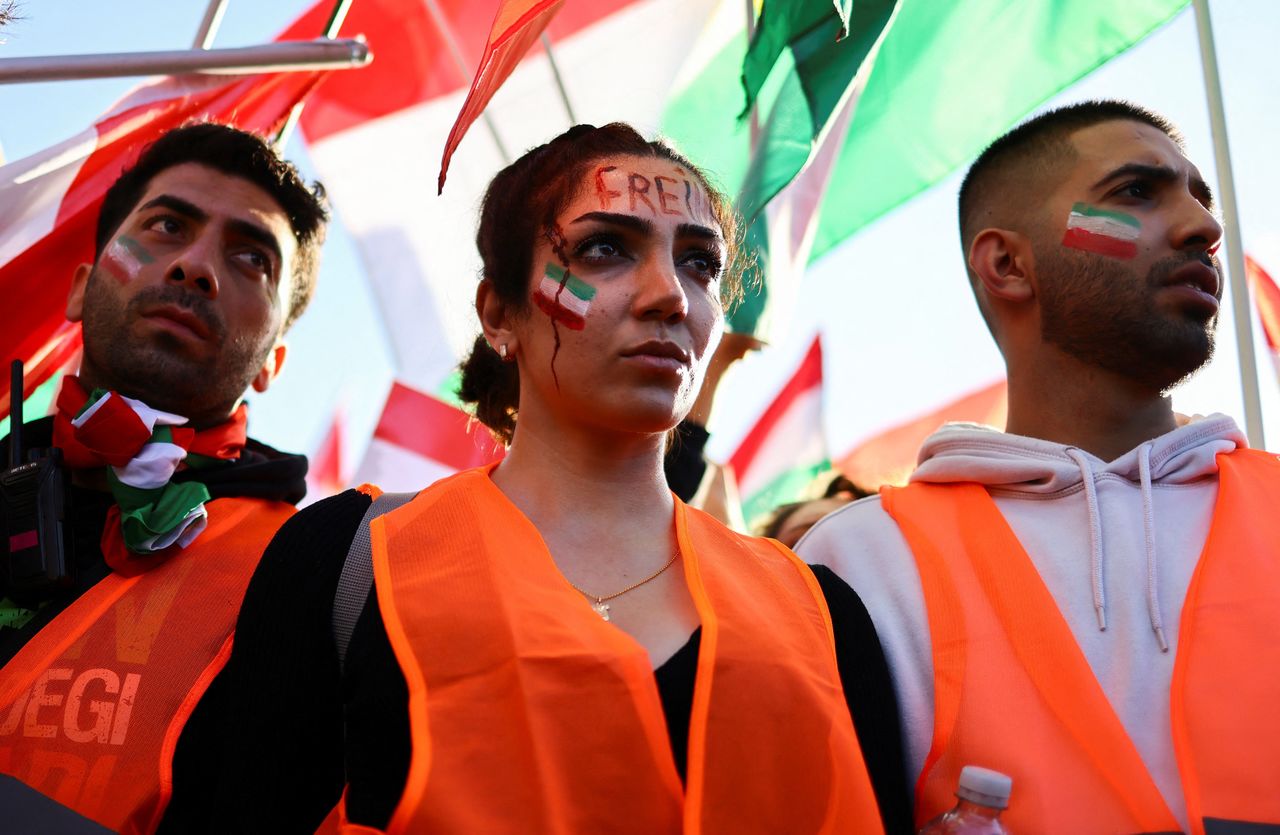 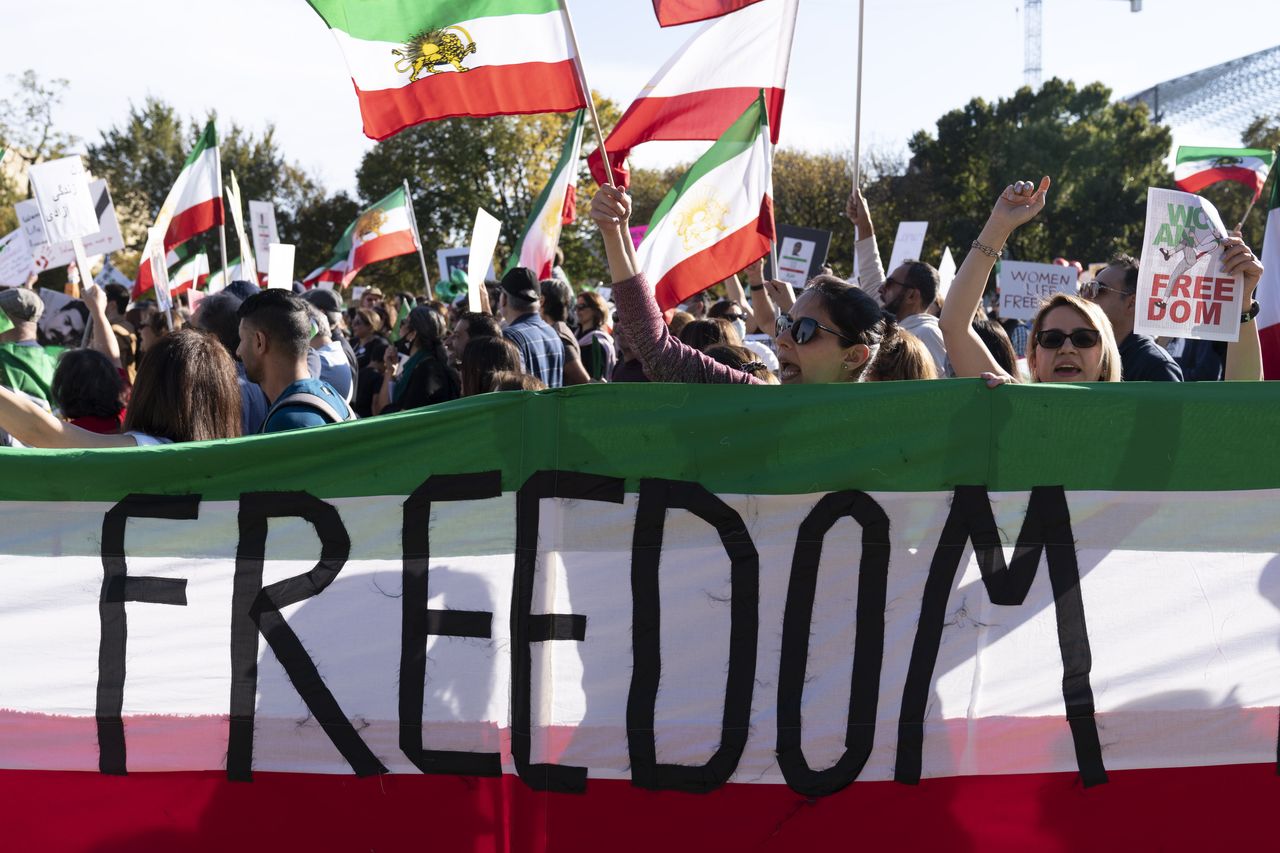 The demonstrations, put together by grassroots organisers from around the US, drew Iranians from across the Washington, DC, area, with some travelling down from Toronto to join the crowd. 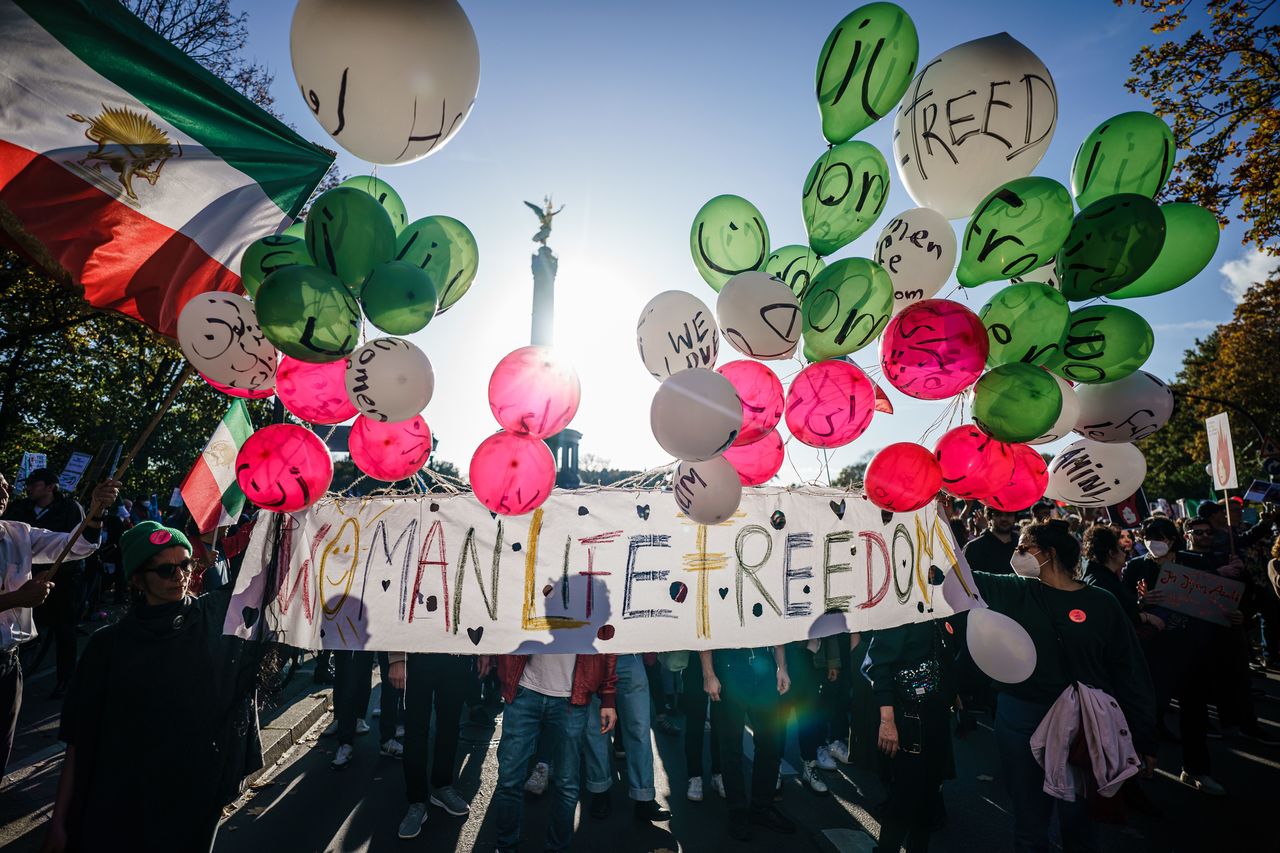 Demonstrators hold a banner in Berlin reading "Woman, Life, Freedom" during a rally in solidarity with Iranian protests following the death of Mahsa Amini last month.