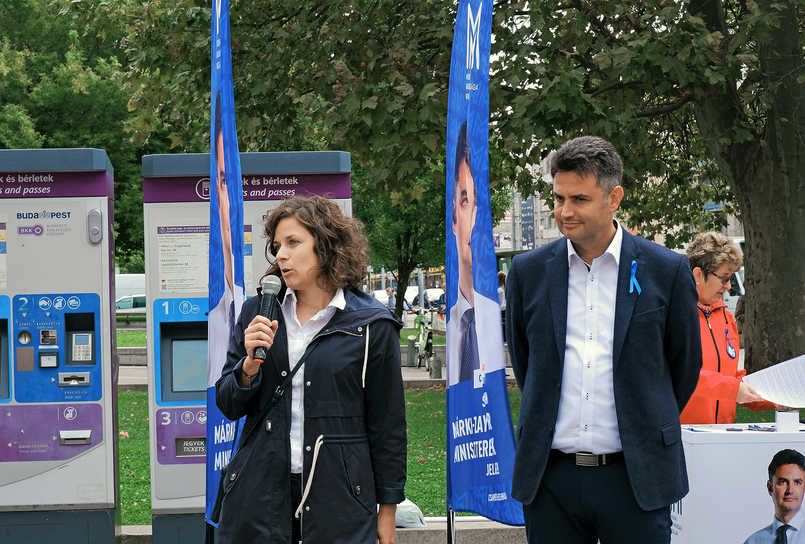 In one of the biggest upsets in modern Hungarian political history, the mayor of Hódmezővásárhely has won the second round of the opposition alliance’s primaries and is now set to face incumbent Viktor Orbán next spring.

The result sets up Márki-Zay to do battle with Prime Minister Orbán, who has convincingly won three consecutive general elections since 2010, in next spring’s vote.

“Today is a celebration of democracy, and Viktor Orbán now has a strong challenger, including 106 joint constituency candidates,” Márki-Zay told a post-election press conference on Sunday evening.

He declared that the pre-election, or primary system, had “changed the opposition,” which will “replace Fidesz with a two-thirds majority next year.”

In what became a two-horse race after Mayor of Budapest Gergely Karácsony dropped out, Márki-Zay soundly defeated Klára Dobrev of the Democratic Coalition (DK), the winner of the first round, despite the member of the European Parliament increasing her vote by some 67,000.

Both leaders pledged to work together to maintain the unity of the opposition. Márki-Zay said he had called Dobrev the previous evening, and “we agreed that we will continue working together, regardless of the result.” Dobrev conceded defeat and congratulated Márki-Zay on his victory at 8 p.m. on Sunday, with just 60% of the votes counted.

Crucially, Budapest, which had primarily supported Karácsony in the first round, generally followed the mayor’s advice to back Márki-Zay, helping him triple his vote in the run-off.

András Pulai, chief executive of pollster Publicus Research, said the result represented “a new paradigm in Hungarian politics, with the anti-establishment candidate winning the opposition primaries [….]. This may signal the end of the Orbán-Gyurcsány dichotomy in Hungarian politics,” referencing the husband of Dobrev and a former Socialist Prime Minister.

Independent commentators concurred that, with some 850,000 voters taking part in the two rounds, the entire primary process had been a resounding success for the opposition. Nonetheless, many challenges remain to be overcome to win even a simple majority in parliament next spring, never mind the coveted two-thirds majority cited by Márki-Zay in his victory speech.

As Political Capital, a Budapest think-tank, noted in its analysis of the results: “The second round did not alleviate concerns that in the countryside, especially in small settlements that serve as the base of the ruling party, there are few opposition voters.”

The six-party alliance can only win the general election if the opposition can increase support in such settlements, which “requires a meaningful effort from the prime ministerial candidate” and particularly from Jobbik and the DK, the two parties which together will field 61 candidates of the 106 single-member constituencies, the analysis stressed.

Then there is the challenge of agreeing whose names will be nominated for the opposition’s share of the 93 seats available via the compensation list, which remains crucial for key party politicians to enter parliament if defeated in their individual constituency contests.

As Political Capital argues: “The joint party list can create the most tensions. There is not even an agreement on when they should finalize the party list, let alone how the places should be distributed among parties.”

Potentially making the task even harder, Márki-Zay has talked of creating a seventh party caucus and has championed the idea that three out of the first 30 list places should be awarded to candidates of Roma origin (seemingly regardless of party affiliation).

“Tensions during the compilation of the joint party list can be said to be natural, [but the] parties will make a mistake if they take the debates to the public,” the think tank cautions, emphasizing that “the compilation of the list is a task for the political parties, which is – by nature – effective only if it is done behind closed doors.”

Nevertheless, as both Pulai and Political Capital note, there is an overriding factor compelling the opposition parties to reach a working, if not amicable, agreement: without one, the work done so far will come to naught since no single party in the alliance can do without the others.

“Everyone will support Márki-Zay, as long as he stays within the established boundaries. Now the parties need him, but eventually, in the end, he will need the parties,” says Pulai before turning to more earthy language.

“They will hold each other’s balls, and Márki-Zay will be included in this game.”

Who is Márki-Zay, and what would it mean for business if he became prime minister?

Péter Márki-Zay has been the mayor of Hódmezővásárhely, a town 170 km southeast of Budapest with a population of 45,000, since 2018, when he won a mayoral by-election against a Fidesz candidate with broad opposition support, amassing 57% of the local vote. He repeated this feat in 2019.

A disaffected former Fidesz voter and father of seven children, he proudly declares his devout Catholicism while stressing he respects all religious faiths and denounces sectarianism.

“I’m a conservative, I was the parish council leader in our Catholic community, the St. Stephen’s parish church, and up until 2010, I was a devoted Fidesz supporter. I didn’t support everything, but I still believe that Hungary developed closest to the European allies the fastest during Orbán’s first government, between ’98 and 2002,” he told foreign journalists in February.

Trained as an electrical engineer, economist, and in marketing, Márki-Zay is a firm believer in entrepreneurship and equality before the law. He is highly critical of what he terms the centralization of power under Prime Minister Viktor Orbán.

“I see the problem with Orbán [as] becoming the sole leader, first in his party, then on the right-wing of the political spectrum, and from 2010, gradually everywhere in the country. He switched off the checks and balances, as much as they worked; he has almost unlimited power,” Márki-Zay asserts.

“I believe in local independence, in municipal independence, checks and balances, and the control of the power of the state. I’m very much pro-European Union and pro-NATO. So, that’s why I consider myself as right-wing.”

He has also gained a reputation for clean governance. “I have a very strong stance against corruption, [and that] is also why we managed to win in Hódmezővásárhely,” he says.

However, observers warn that his tendency to engage in long speeches and off-the-cuff remarks, which have gone largely unnoticed nationally, could cause him problems on the national stage.

“He’s pretty much the same kind of guy as Orbán: he loves to argue, he loves to debate and confront himself and others,” says Publicus’ András Pulai.

“I’ve labeled him a Trumpian-style politician, and I tend to keep to this. He uses grandiose words and speeches; he refers to public polls which favor him and dismisses those that don’t.”

He has a reasonable knowledge of English, having worked in both Canada and the United States.