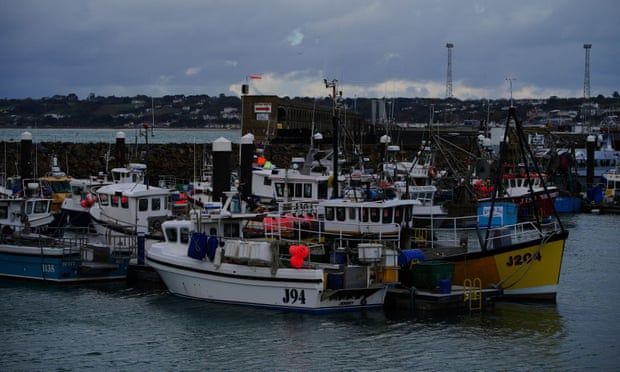 UK was braced for immediate measures but French president says ‘talks need to continue’
France’s president, Emmanuel Macron, has shelved his threat to clog up UK exports and ban its fishers from landing catches at French ports from midnight in a dispute over access to British fishing waters, as his deadline approached.

Discussions resumed after a proposal was put forward by Macron’s government late on Monday. Downing Street had previously said it was bracing for Paris to deliver on its vow to retaliate over the issue of fishing permits.

“Since this afternoon, discussions have resumed on the basis of a proposal I made to prime minister [Boris] Johnson. The talks need to continue,” Macron told reporters on the sidelines of the Cop26 climate conference in Glasgow. “We’ll see where we are tomorrow at the end of the day, to see if things have really changed.”

A UK government spokesperson said: “We welcome the French government’s announcement that they will not go ahead with implementing their proposed measures as planned tomorrow. As we have said consistently, we are ready to continue intensive discussions on fisheries … We welcome France’s acknowledgement that in-depth discussions are needed to resolve the range of difficulties in the UK-EU relationship.”

France had been expected to impose extra customs checks and ban British fishing boats at some French ports from midnight. Official sources initially reported that neither side was backing down in the post-Brexit row.

However, David Frost, the UK’s Brexit secretary, is to meet Clément Beaune, the French minister for EU affairs, in Paris on Thursday, to discuss possible ways out of the crisis. Beaune tweeted that he had already spoken to Frost on Monday and that he expected a response to Paris’s compromise proposal by Wednesday.

He wrote that he looked forward to an “in-depth discussion” with Frost over the range of post-Brexit issues causing problems in the British-Franco relationship.

France has been infuriated that some of its small boats are being denied permission to fish in the waters around the UK and Channel Islands. The UK insists its licensing regime is reasonable and it will continue to require boats to provide evidence that they have previously fished in those waters on at least four days in the last four years.

Johnson and Macron had bumped fists as they arrived at the Cop26 summit on Monday.

At a post-G20 press conference on Sunday, Macron initially insisted that Britain had to give ground or France would trigger trade reprisals this week. “The ball is in Britain’s court. If the British make no movement, the measures of 2 November will have to be put in place,” he said.

But on Monday evening, the French president said he had pushed back the deadline by which Paris had said it would impose the new measures.

Earlier in the day, Liz Truss, the UK foreign secretary, had told France it had 48 hours to back down on threats or Britain would begin dispute talks set out in the Brexit deal.

A spokesman for Johnson suggested there would not be retaliatory UK trade measures, but action could be triggered through the dispute mechanism. “Depending on if, or what, the French decide to do, we will enact them as and when we need to,” he said.

A meeting to find a compromise, organised by the European Commission with officials from the UK, Jersey and France, had initially been marked by a lack of movement by both sides on Monday, with sources describing the mood as sour.

Jersey’s government was preparing to provide its fishers with financial support in the expectation that its vessels would not be able to land catches in French ports. The Jersey Fishermen’s Association (JFA) also called for the island’s authorities to respond in kind to the expected crisis by closing off the whelk and scallop fisheries to French vessels and banning dredging and trawling “with immediate effect for a period of six weeks”.

The talks continued late into the evening, however.

The diplomatic row over fishing, a very small sector of the UK economy, threatened to overshadow the G20 talks, which took place in Rome at the weekend, and also the Cop26 summit.

Almost 1,700 EU vessels have been licensed to fish in UK waters, equating to 98% of EU applications for fishing licences, the UK government says, but this figure is disputed in Paris. The main area of disagreement is over the number of small French vessels given access to the immediate coastal waters of the UK and Jersey. On Monday evening, the UK government spokesperson said it would consider any new evidence to support the remaining licence applications.

Truss had suggested on Monday that Macron may be making “unreasonable threats” because he has a difficult election looming.

Asked about whether France and the UK had come to an agreement, she told Sky News: “The deal hasn’t been done. The French have made completely unreasonable threats, including to the Channel Islands and to our fishing industry and they need to withdraw those threats.”

Asked why the row had emerged, she said: “You might say there’s a French election coming up.” Seeming angered by the dispute, she added: “I’m not remotely happy about what has happened.”
#Boris Johnson  #Johnson
Add Comment