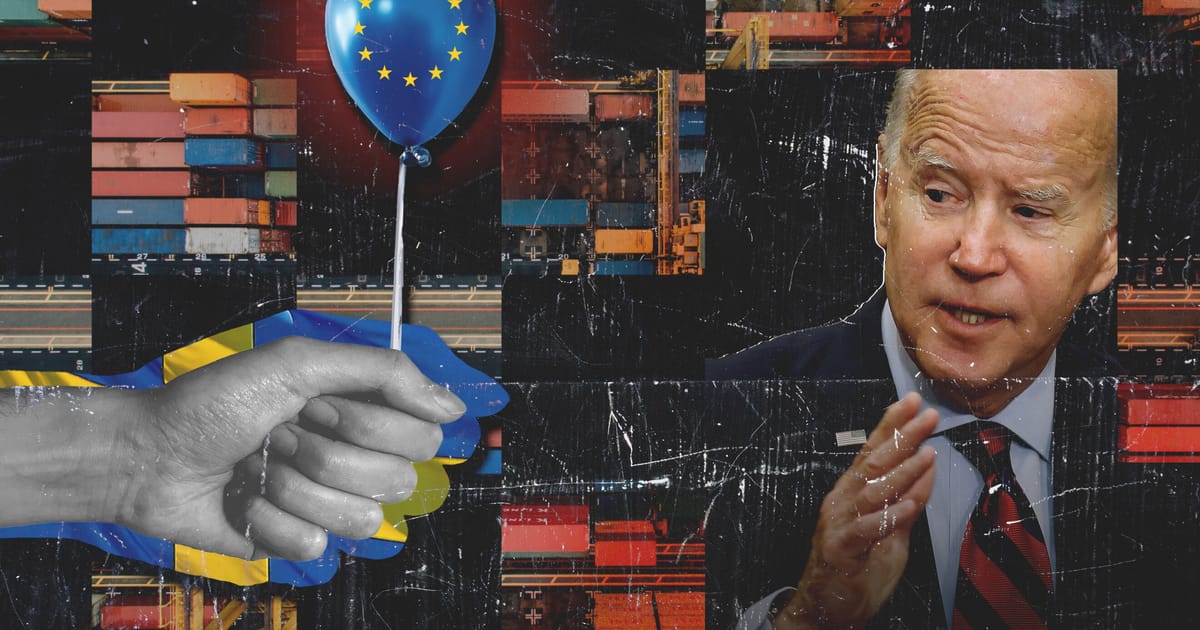 Promoting free trade is a priority for Stockholm, but it may find it has an EU-US trade fight on its hands.

On timing, Sweden could be forgiven for cursing its luck.

Just as the country embarks on its EU presidency, the bloc is facing not only an economy-hammering war on its doorstep, but also increasingly blustery headwinds from a nascent trade war with Washington.

A liberal stance on trade and strong transatlantic ties are two core tenets of Sweden’s global outlook. But those priorities look set to be severely tested as the U.S. embarks on a massive program of state support for home-grown industry.

President Joe Biden responded to EU pleas in early December with a vague promise of special treatment, but it is unclear how far he will go to placate European allies. And with Brussels teeing up its own subsidy war chest, hopes of drawing a line under the brutal trade wars of the Donald Trump era are fading.

As the Swedes take up their six-month stint at the helm of the Council of the EU, billions of dollars in U.S. subsidies created by the Inflation Reduction Act will become available to American consumers for electric vehicles and other “Made in U.S.A.” green tech under legislation backed by President Joe Biden.

“The bomb is going to explode, but not until the Swedish presidency,” an EU diplomat said of the unfolding transatlantic trade dispute.

With EU protectionists spitting with rage at Washington’s move, the pressure to shield the bloc’s industries from the $369 billion package of state support may prove too strong for the Nordic free-traders to resist. France and Germany are already vowing to retaliate against Washington with their own set of government handouts.

Commission President Ursula von der Leyen, signaled earlier this month what many saw as a protectionist shift in EU trade policy. She argued that Europe would have to respond to what she called the “new assertive industrial policy” of competitors, adding that, “Europe will always do what is right for Europe.”

How the bloc responds will be an urgent question as the Swedes pick up the reins, but there will be differences of opinion among the 27 EU members, says former European Trade Commissioner Cecilia Malmström, who is now at the liberal PIIE think tank.

“The Swedish government — whatever the color — tends to be very keen to have a good transatlantic relationship. They will certainly try to use their influence,” she said.

“What it has to handle is, of course, the internal discussions — you know, ‘should the EU do the same thing? Should we strike back?’ There are lots of differences internally in the European Union. Not a majority [of] members [want] a big reciprocal act, I think.”

Sweden’s new Trade Minister Johan Forssell told POLITICO that the country will do “what we can to improve the relationships between the EU and the U.S.” He did, though, acknowledge at a recent meeting of EU trade ministers in Prague the concerns in European capitals that the Inflation Reduction Act is discriminatory, describing key elements of it as “worrying.”

With protectionism on the rise globally, Sweden’s love of free trade makes it something of a rarity.

Selling goods abroad proved a lifeline when Sweden was poor and it is now a source of great wealth for a country where 88 percent of GDP relies on foreign trade. “Sweden has a disproportionate amount of very international companies, which makes us historically pro-trade,” said a Swedish diplomat — those include major global brands like IKEA, Volvo and Ericsson.

And unlike in some European countries, support for free trade extends to both the left and right of the political spectrum. “Trade has not been controversial among different parties,” said Jonas Kasteng, a senior adviser to the Swedish National Board of Trade. “This is also the case for employer organizations and the trade unions — about 30 percent of all employment in Sweden is due to trade.”

Politicians on the left recognize that wealth generated by free trade has propped up the country’s generous welfare state. “The Social Democrats — and more generally governments in Sweden — have relied on social policy and the welfare state to protect workers from the ups and downs of the international economy, rather than regulating markets to achieve that end,” said Johannes Lindvall, a professor of political science at the University of Gothenburg.

The new government, which for the first time depends on parliamentary support from the far-right Sweden Democrats, restated that commitment to more liberal trade rules. “With our open and export-dependent economy, it is in Sweden’s interest to strengthen … the EU’s position as a trade bloc,” Prime Minister Ulf Kristersson told parliament in October, a few days after the coalition government was formed.

Trade for Ukraine and beyond

In the trade spat with the U.S., Stockholm will try to pacify things on the sidelines but won’t have much say as bulkier countries fight it out. But aside from calming behind-the-scenes diplomacy, Stockholm will have other liberal goals in its sights. 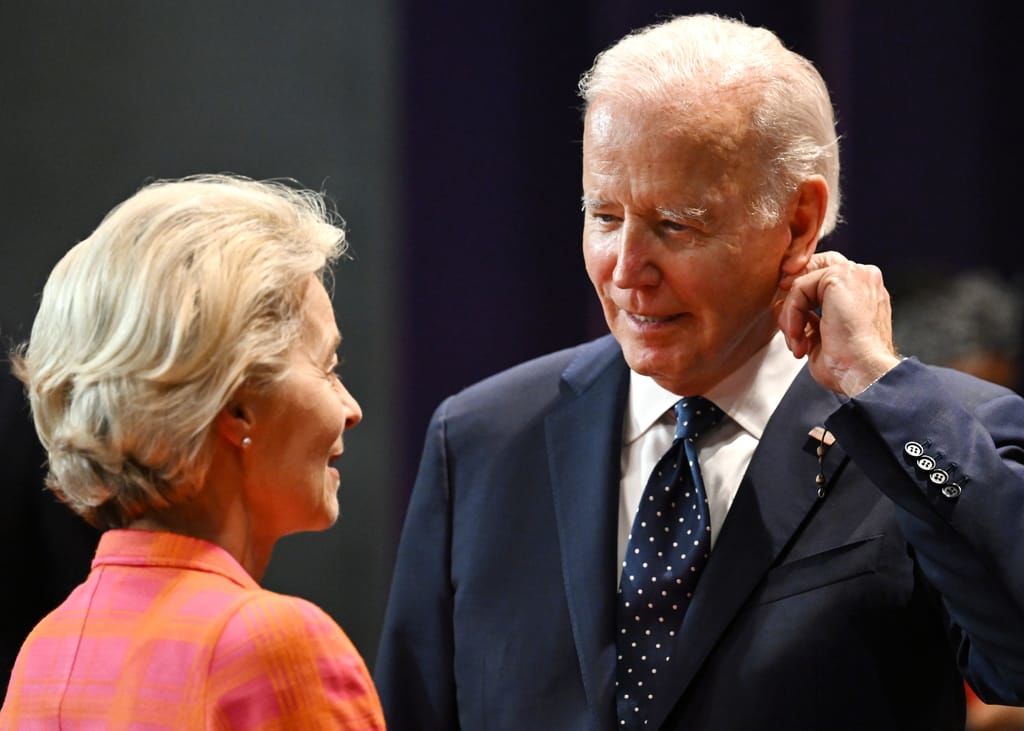 Kristersson made clear that an overarching priority will be support for Ukraine. “We must provide as much support as possible to war-torn Ukraine,” he told parliament in October, “politically, economically and in terms of security.” On the trade front, that translates into extending zero tariffs on Ukrainian products entering the bloc into next year and perhaps making the tariff cuts permanent.

Sweden also plans to speed up trade talks on other fronts and ratify as many deals as possible during its six-month stint. It will attempt to wrap up the finishing touches on the EU’s trade pact with the Mercosur countries of Brazil, Argentina, Uruguay and Paraguay. Now that left-wing President Luiz Inácio “Lula” da Silva is back in office in Brazil, the race is on for the two blocs to agree on a new protocol to strengthen the deal’s green credentials and boost the terms for Brazil’s industry — one of Lula’s campaign promises.

The Swedish presidency may also push for EU countries to ratify a new agreement with New Zealand and revamped deals with Chile and Mexico — as well as trying to reinvigorate talks with Australia, Indonesia and India.

Another area where the Swedes will hope to make progress is the modernization of the generalized system of preferences, a program that allows low-tariff access to the EU single market for developing countries. That would benefit Sweden-based retailers like fashion heavyweight H&M, which rely on manufacturers in countries such as Bangladesh for their supply chains.

A revamp of the scheme is bogged down in the Council because Spain and other agricultural countries want to protect their own rice and sugar production against cheap imports. Countries are also fighting over whether to link preferential access to the EU market to the recipient countries accepting the return of illegal immigrants.

Beleaguered free-trade sympathizers such as the Netherlands and the Baltics have been looking forward to having a like-minded nation at the Council helm to make progress on some of these deals. “After years of a defensive agenda, now it’s time to turn to trade,” said Fredrik Erixon, an economist at liberal think tank ECIPE. “The Swedish presidency has been talked up a lot on these issues,” he said.

It may be just Sweden’s luck that a transatlantic trade bust-up blows those liberal trade ambitions off course.