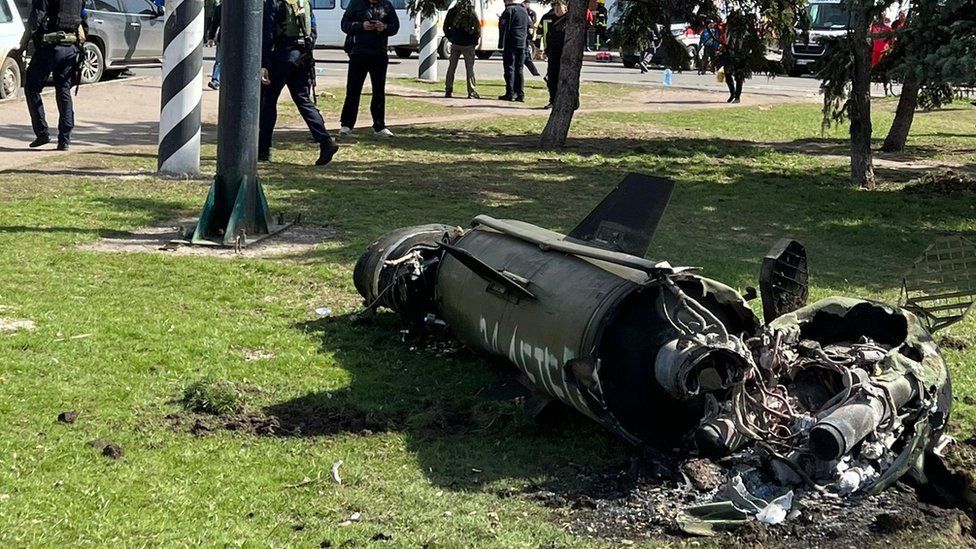 Kramatorsk station attack: What we know so far

Scores of people, including children, have been killed when rockets hit a railway station in the eastern Ukrainian city of Kramatorsk.

Both Ukraine and Russia have since blamed each other for the deadly attack.

The railway station was hit at about 10:30 local time (07:30 GMT) on Friday, Kramatorsk Mayor Oleksandr Honcharenk told the BBC.

He added this happened as the crowds were "waiting for the first train" to be evacuated to safer regions in central and western Ukraine ahead of an expected massive Russian offensive in the east.

Meanwhile, Nathan Mook, an aid worker who saw people crowding at the station, counted between five and 10 explosions: "Two minutes after we had driven by, you feel it before you hear it: the boom, the explosion."

"One of our guys at the warehouse said he had seen Ukrainian air defence intercept one of the rockets," he said. "These were missiles, he could see the wings on the missile as it was intercepted."

Mr Mook's aid group World Central Kitchen was distributing food at the station at the time.

Ukraine's prosecutor general's office later said that nearly 4,000 people - mainly women and children - were at the station at the time.

Debris from one of the rockets could be seen lying on the grass near the station. The message in Russian "Za detei", meaning for or on behalf of the children, had been daubed on the missile in white.

The BBC's Joe Inwood arrived at the blast scene a few hours later, reporting that the once busy station was almost entirely deserted - save for a few police officers and the workmen boarding up the broken windows.

The dozens of bodies that were clearly visible in the gruesome videos of the aftermath were now gone, he says, and the clear-up operation was already well under way.

Only a few patches of blood remained.

Donetsk regional head Pavlo Kyrylenko wrote on his Telegram page that the death toll had risen to 50. He said that five children were among the dead.

About 100 people were injured, a number of them seriously, local officials said.

There are fears that the death toll will climb even further.

But he later corrected himself saying that Tochka-U rockets had been used.

Tochka-U rockets are extremely inaccurate, regularly missing their targets by half-a-kilometre or more, according to Amnesty International weapons experts. 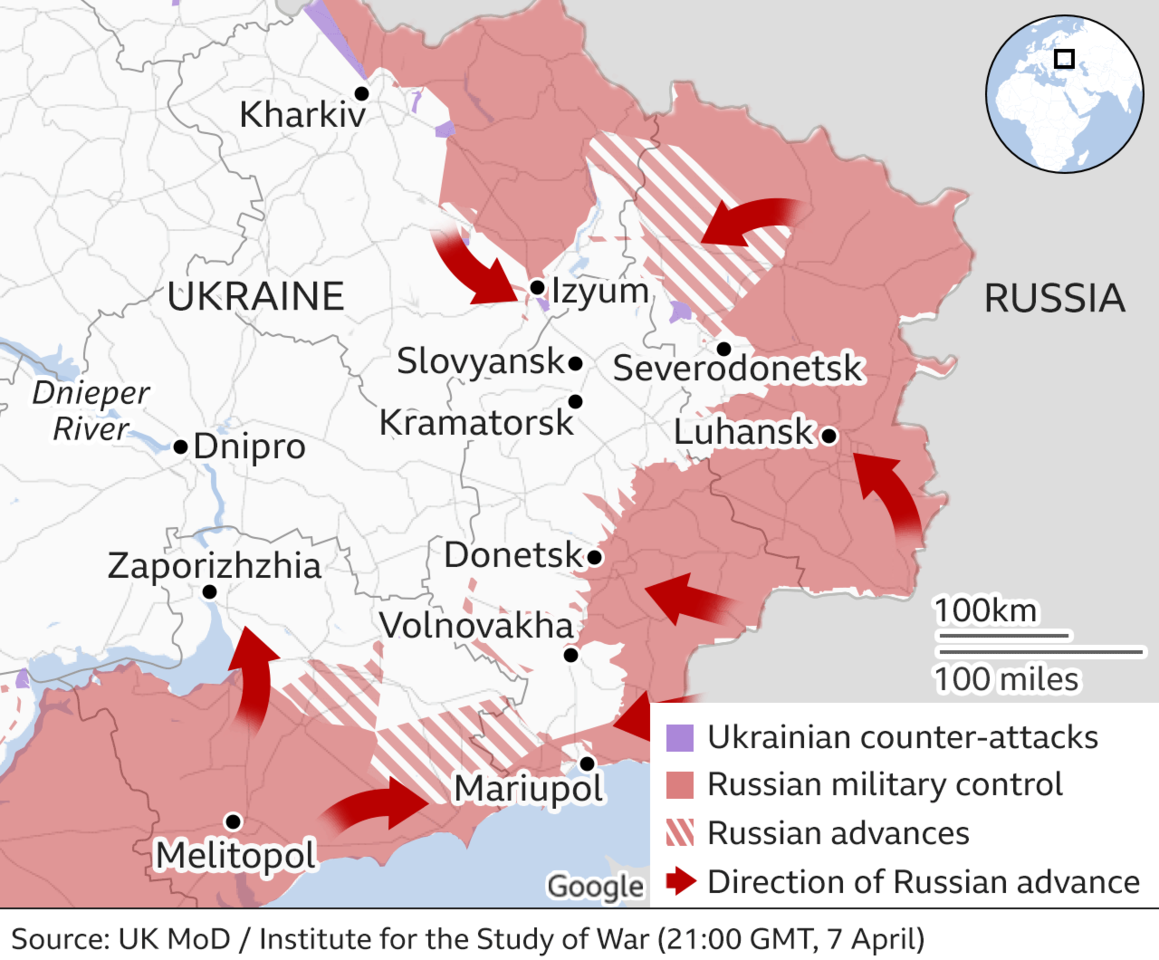 Was it a deliberate attack on civilians?

Writing on Instagram, he said: "Lacking the strength and courage to stand up to us on the battlefield, they are cynically destroying the civilian population.

"This is an evil that has no limits. And if it is not punished, it will never stop."

He added that there were no soldiers at the station.

It says Russia is responsible for mass killings in the town of Bucha, near Kyiv, and also the bombing of a theatre in the besieged southern port of Mariupol, where many civilians were sheltering from Russian shelling.

But Russia denies the accusations.

On Friday, the defence ministry in Moscow accused Ukraine's armed forces of carrying out the Kramatorsk attack and using civilians as a "human shield" and a Russian-backed separatist leader said it was a Ukrainian "provocation".

The ministry insisted it did not use the type of Tochka-U missile that was fired, whereas the Ukrainian military did.

However, analysts point to images and videos on social media that appear to show the Russian military using the Tochka-U.

Is the attack affecting evacuation efforts?

It is clearly hampering rescue efforts from Kramatorsk - the largest easternmost city in the Donetsk region which still has rail links to central and western Ukraine.

Tens of thousands of people have already used the city's train station to flee ahead of what Ukraine warns is an imminent large-scale offensive by Russian forces in the Donetsk and the adjacent Luhansk regions.

But Mr Kyrylenko stressed on Friday that the regional authorities were striving to continue getting civilians out.

"We are looking for drivers. We'll be needing about 30-40 drivers for today [Friday]," Mr Honcharenko said. 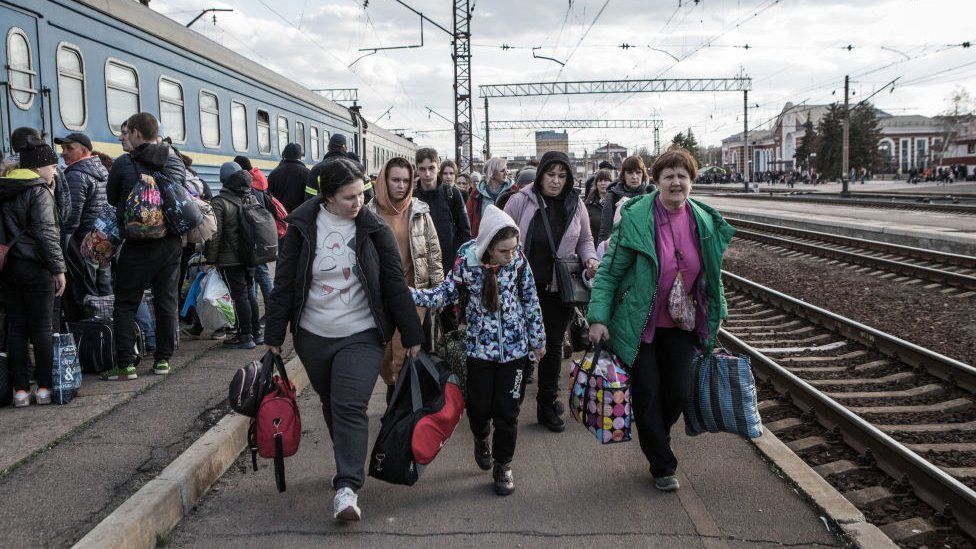 WATCH: Burnt-out cars and remains of a missile outside Kramatorsk station
Add Comment