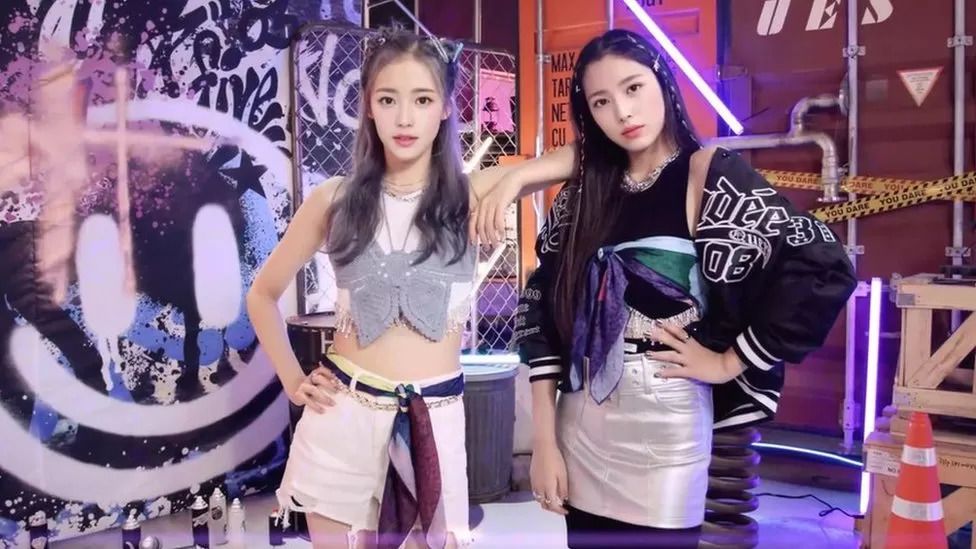 K-pop: The rise of the virtual girl bands

Since releasing their debut single I'm Real in 2021, K-pop girl group Eternity have racked up millions of views online.

They sing, dance and interact with their fans just like any other band.

In fact, there's mainly one big difference between them and any other pop group you might know - all 11 members are virtual characters.

"The business we are making with Eternity is a new business. I think it's a new genre," says Park Jieun, the woman behind Eternity.

"The advantage of having virtual artists is that, while K-pop stars often struggle with physical limitations, or even mental distress because they are human beings, virtual artists can be free from these."

The cultural tidal wave of Korean pop has become a multibillion-dollar force over the last decade. With its catchy tunes, high-tech production and slinky dance routines, K-pop has smashed into the global mainstream, becoming one of South Korea's most lucrative and influential exports.

But the top K-pop stars, their legions of loyal fans, and the business-owners looking to capitalise on their success are all looking to the future.

With the explosion of artificial intelligence (AI), deepfake and avatar technologies, these pop idols are taking their fame into a whole new dimension. 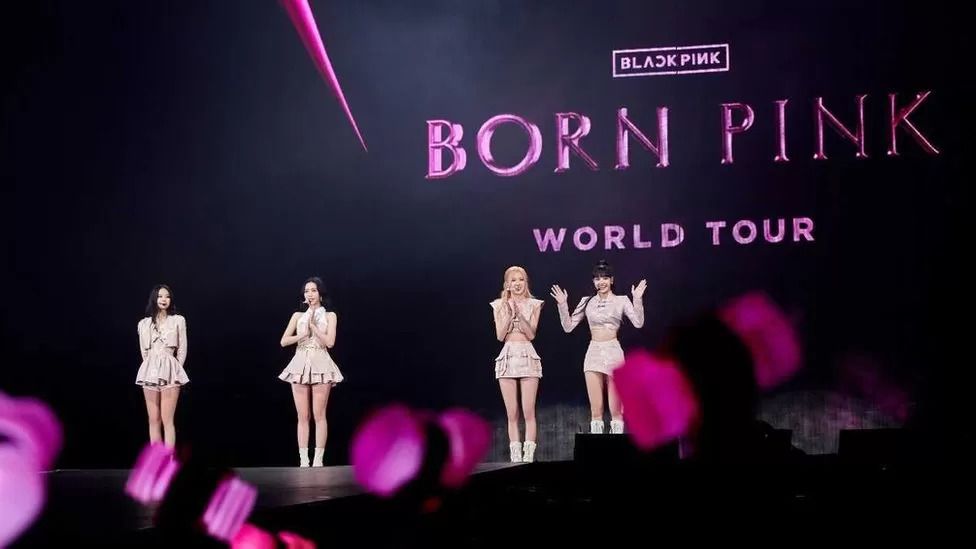 K-pop superstars Blackpink are also using the metaverse to reach a wider audience
The virtual faces of Eternity's members were created by deep learning tech company Pulse9. Park Jieun is the organisation's CEO.

Initially the company generated 101 fantasy faces, dividing them into four categories according to their charms: cute, sexy, innocent and intelligent.

Fans were asked to vote on their favourites. In-house designers then set to work animating the winning characters according to the preferences of the fans.

For live chats, videos and online fan meets, the avatar faces can be projected onto anonymous singers, actors and dancers, contracted in by Pulse9.

The technology acts like a deepfake filter, bringing the characters to life.

"Virtual characters can be perfect, but they can also be more human than humans," Park Jieun tells BBC 100 Women.

As deepfake technology moves into the mainstream, there have been concerns that it could be used to manipulate people's images without permission or generate dangerous misinformation.

Women have reported having their faces put into pornographic films, while deepfakes of Russian President Vladimir Putin and President Volodymr Zelensky of Ukraine have been shared on social media sites.

"I'm always trying to make it clear that these are fictional characters," says the CEO. 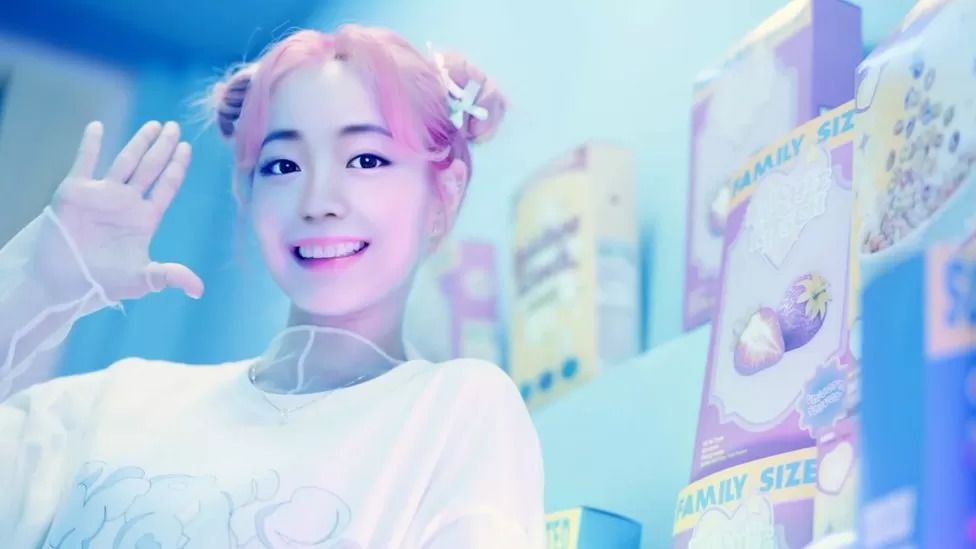 Virtual characters, like this one from Eternity, can be 'more human than humans,' says tech businesswoman Park Jieun

And Park Jieun sees other advantages in virtual bands where each avatar can be controlled by their creators.

"The scandal created by real human K-pop stars can be entertaining, but it's also a risk to the business," says the CEO.

She believes she can put these new technologies to good use and minimise risks for overstressed and pressurised K-pop artists trying to keep up with the demands of the industry.

Over the past years, K-pop made headlines for various social issues - from dating gossip to online trolling, fat-shaming and extreme dieting of band members.

The genre has also spurred a conversation about mental health and cyberbullying in South Korea, after the tragic death of young K-pop stars, which many believe had a significant impact on their following.

In 2019, singer and actress Sulli was found dead in her apartment, aged 25. She had taken a break from the entertainment industry, after reportedly "suffering physically and mentally from malicious and untrue rumours spreading about her".

Her close friend Goo Hara, another bright K-pop artist, was also found dead at her home in Seoul soon after. Before taking her own life, Goo was fighting for justice after secretly being filmed by a boyfriend, and was being viciously abused online for that.

For the human stars working around the clock to train, perform and interact with their fans, having some avatar assistance in the virtual world could provide some relief.

She spent almost four years as a trainee, waiting for her opportunity to be thrust into the limelight - and one of many candidates who had to undertake monthly evaluations. Those who didn't show sufficient progress were let go.

"I worried a lot about not being able to debut," says Yewon. 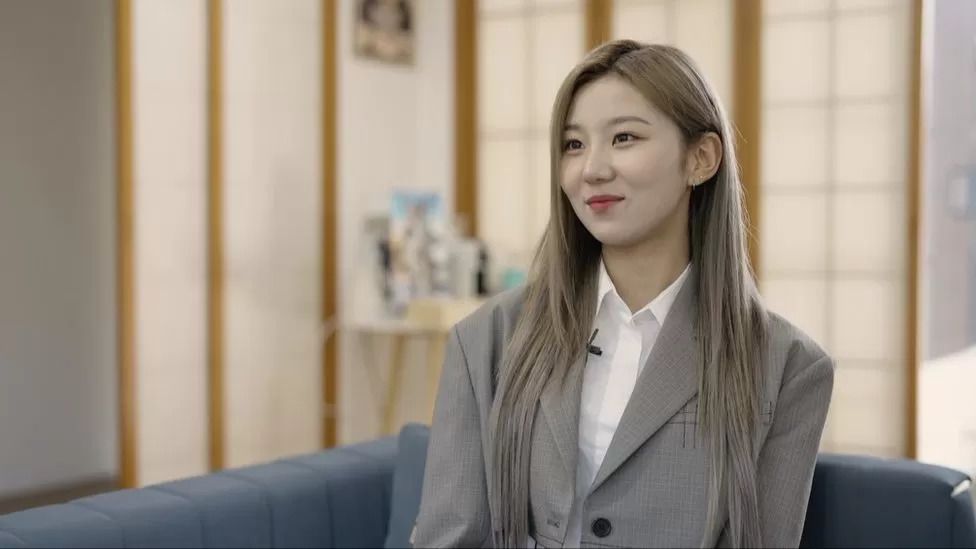 Becoming a K-pop star doesn't happen overnight. And with new groups making their debut every year, it can be hard to stand out.

"I went to work around ten in the morning and did my vocal warm-ups for an hour. After that, I sang for two or three hours, I danced for three to four hours and worked out for another two hours", says the vocalist.

"We practised for more than 12 hours in total. But if you aren't good enough, you end up staying longer."

Yet the prospect of virtual avatars flooding the industry worries Yewon, who says that fans appreciate her authenticity.

"Because technology has improved so much lately, I'm afraid that virtual characters will take the place of human idols," she says. 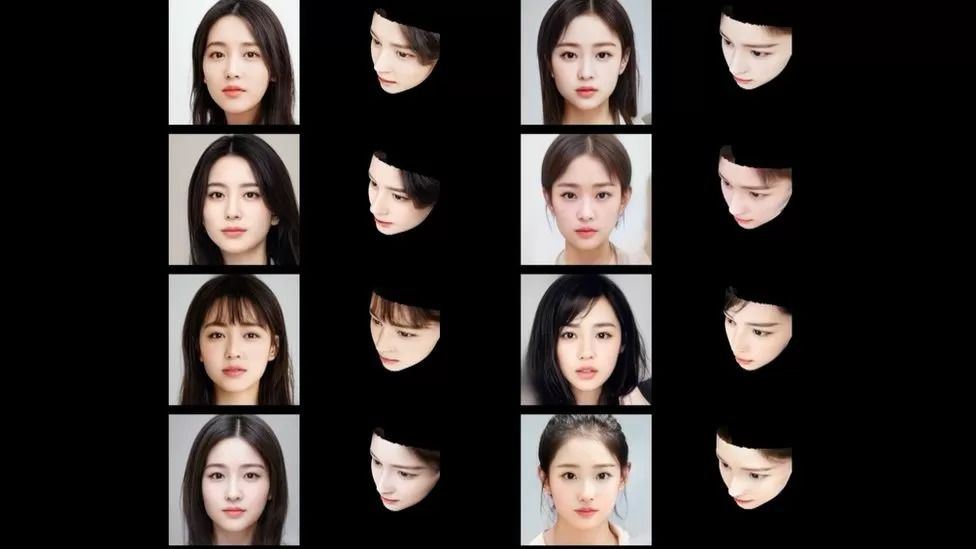 Other K-pop groups, however, have been quick to adopt new avatar technologies - and the business is forecasted to grow steadily.

The digital human and avatar market size is estimated to reach $527.58bn (£429bn) globally by 2030, according to projections by market consulting company Emergen Research.

At least four of K-pop's biggest entertainment companies are investing heavily in virtual elements for their stars, and five of the top-earning K-pop groups of 2022 are getting in on the trend.

Using virtual copies of themselves allow them to reach fans across time zones and language barriers - in ways that flesh-and-blood artists would never be able to do.

Girl band aespa, for instance, consists of four human singers and dancers (Karina, Winter, Giselle and Ningning) and their four virtual counterparts - known as ae-Karina, ae-Winter, ae-Giselle and ae-Ningning. The avatars can explore virtual worlds with the fans and be used across multiple platforms. 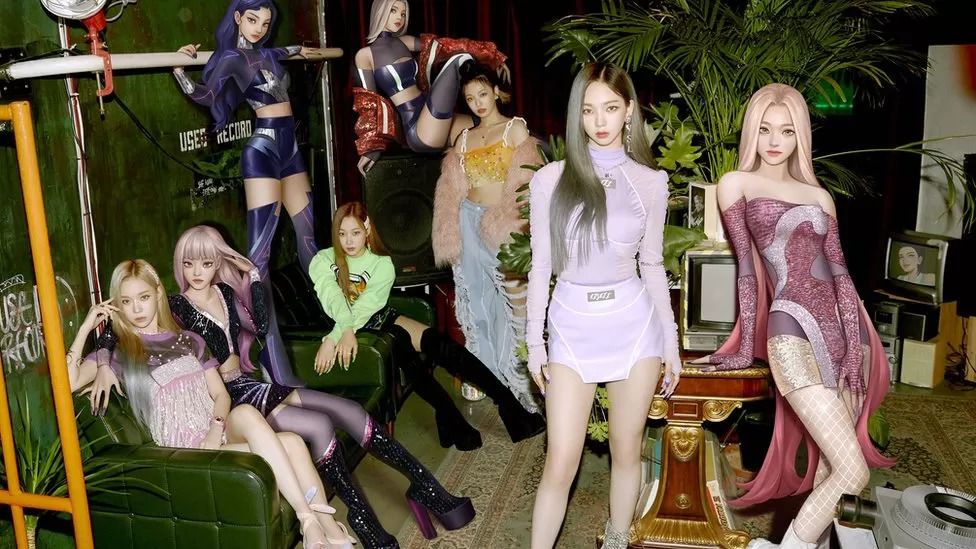 While chart-topping girl band, Blackpink made history with the help of their virtual twins, winning the first-ever MTV award for Best Metaverse Performance in 2022.

More than 15 million people from around the world tuned in to popular online gaming platform PUBGM to watch the group's avatars perform in real time.

During the Covid-19 pandemic Moon Sua and her K-pop group Billlie had to cancel their live performances and fan meets. Instead, the band's management company created virtual copies of band members, to throw a party for fans in the virtual world.

"Since it was our first time doing it, we were a bit clumsy," says Sua. 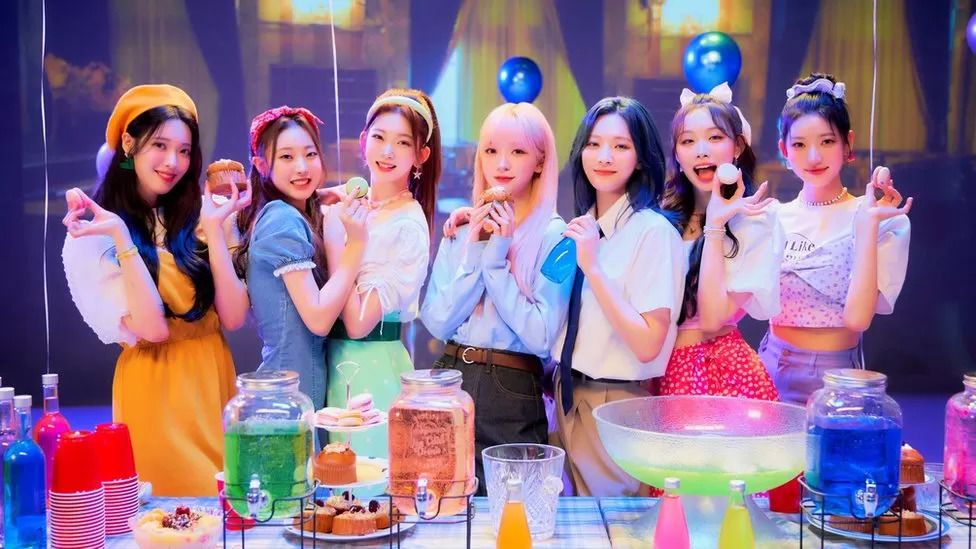 "But as time went by, we got used to it, talking with the fans while adapting to the virtual world. We had such a good time."

Moon Sua was impressed by how real the group's avatars looked, but says she still prefers to meet with their followers in person.

"I don't think it's something threatening. Maybe we can learn skills from watching them? I don't think they are a threat that can replace us," says the band's main rapper.

But there are also some concerns in the wider industry about ethical and copyright issues that avatar technologies can present.

"There's a lot of unknowns when it comes to artists in the metaverse, virtual versions, icons of themselves, whatever it might be," Jeff Benjamin, Billboard's K-pop columnist, tells BBC 100 Women.

"It might be the fact that the artists themselves might not be in control of their image and that can create an exploitative situation."

'Too soon to know'

For fans like Lee Jisoo, 19, who studies at engineering college, K-pop has been a welcome distraction during times of stress. She has been a dedicated Billlie fan since the group launched in 2019.

"Their love for their fans is amazing. You cannot help but love them more," says Jisoo.

Jisoo collects fan albums and merchandise, while also interacting with the band online and in the virtual world.

"I feel emotions through Billlie that I wouldn't have felt if I didn't like them," she says.

"And I'm fangirling even more because I want to give back those feelings to Billlie. I think this is a positive thing for me." 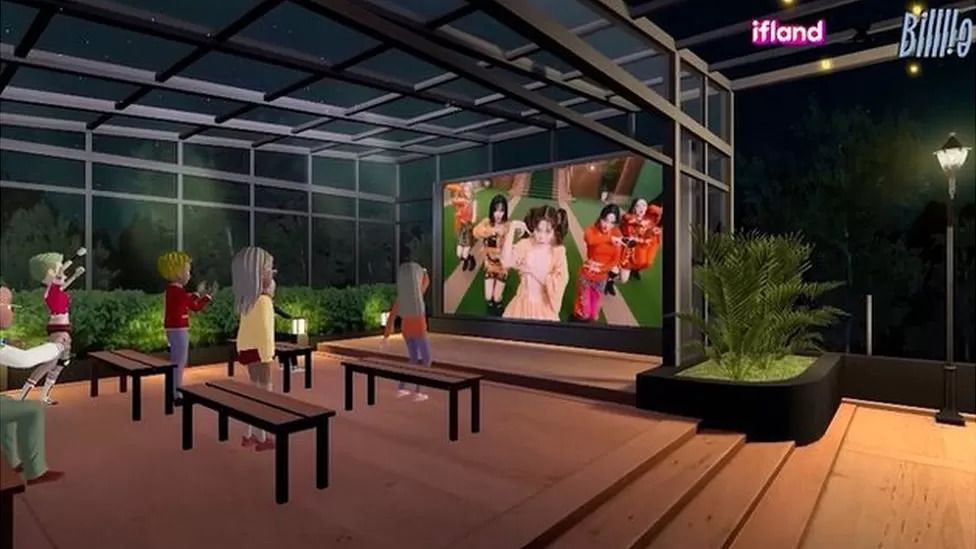 Billlie threw a party for their fans in the virtual world

But the virtual world can also be an unwelcoming space for K-pop stars and fans alike, with regulations to prevent cyberbullying or abuse lacking or rarely being enforced. The industry has been rocked by online bullying and smear campaigns waged against successful stars.

"I get more stressed out when I see mean comments on Billlie online. Because it's also an insult to the things I like, so I get stressed out and heartbroken," says Jisoo.

Child and adolescent psychiatrist Jeong Yu Kim, who works in Seoul, says it's too soon to know how virtual technology and the rise of AI characters will affect young people.

"I see the real problem is that we're not seeing each other in an authentic way," Jeong Yu says.

"In virtual worlds, we could be more free and do things that you can't do outside, you can be someone else," explained Jeong Yu. "This K-pop industry is really responsive to what the public wants, and they would want their artists to fulfil that." 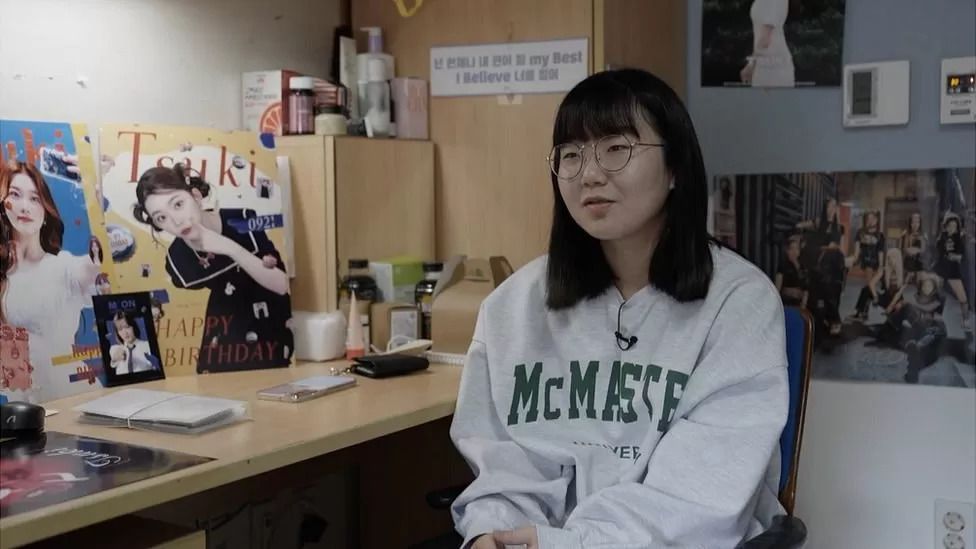 "Just like any entertainment industry, there are so many pressures," says Jeff Benjamin.

"The artists are really expected to always show a good image, they're supposed to be that shining example for their fans."

But this is changing, he says, and there has been an industry-wide shift taking place in order to better serve the mental health needs of the stars and reduce the intensive workload.

"The artists themselves are also opening up about what's going on with their mental health, and that's actually forging a deeper connection with those fans."

In the fast-changing K-pop industry, it might be too soon to say whether virtual idols are a short-term fad or the future of the music industry.

But for now, for fans like Jisoo the choice of who to follow is an easy one.

She believes "people who like real idols and people who like virtual idols are completely different" - and for many like her, it would be "hard" to fall for the avatars at the expense of human K-pop stars.