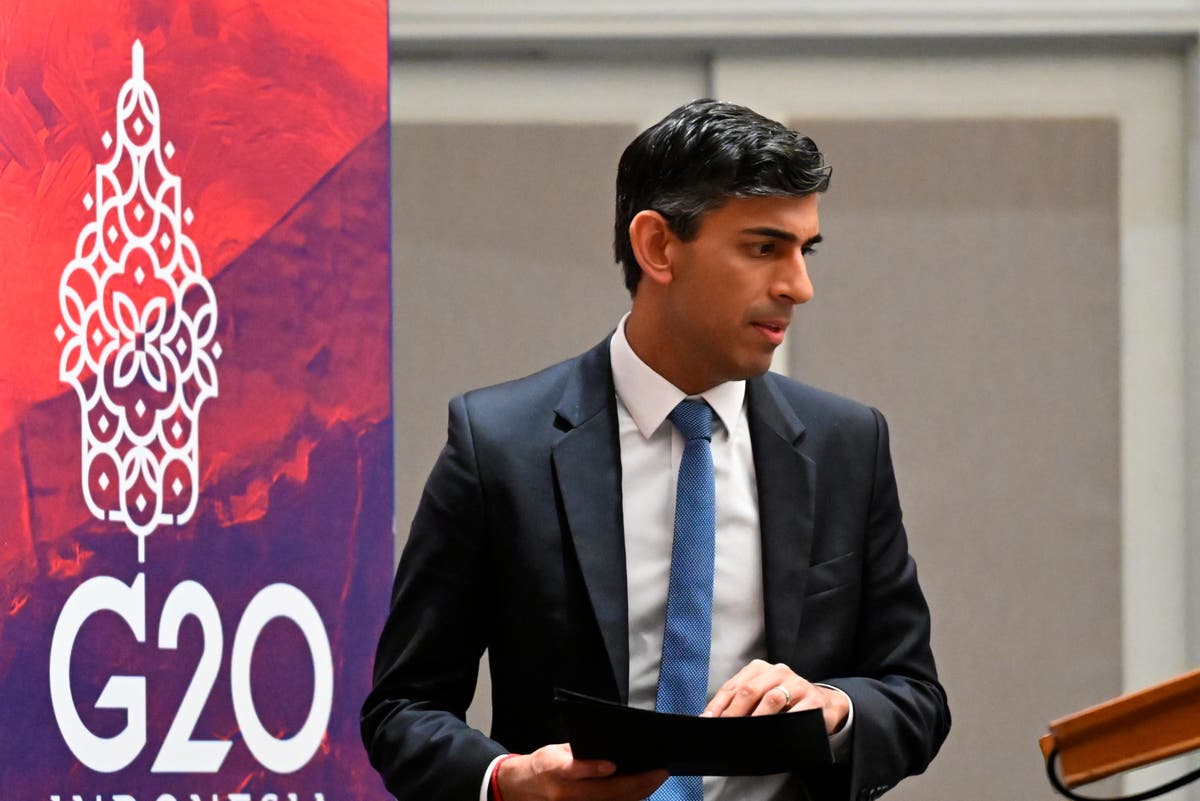 Inflation hits 11.1% as Rishi Sunak brands it the ‘enemy we need to face down’ - but he has no idea how to solve it

Energy bills drive inflation to 41-year high, but Sunak has no idea how solve as PM the economic disaster that he created as the chancellor.
Soaring inflation is the “enemy that we need to face down,” Rishi Sunak warned on Wednesday as it spiralled above 11 per cent.

The Prime Minister stressed that getting it under control was his “No1 priority”.

Official figures showed CPI inflation rose to an eye-watering 11.1 per cent in October, up from 10.1 per cent a month earlier, according to the Office for National Statistics.

Speaking at a G20 summit in Bali, Indonesia, Mr Sunak stressed that inflation was “eating into people’s living standards” and making them poorer.

He added: “It’s the enemy that we need to face down.”

The Prime Minister emphasised that Chancellor Jeremy Hunt would set out a plan to “grip” inflation in his Autumn Statement on Thursday which is expected to include more than £20 billion of tax rises and at least £30 billion of spending cuts to get Britain’s public finances back on an even keel.

He added: “My absolute number one priority is making sure that we deal with the economic situation that we face at home.

“With more news of inflation today, it’s the number one thing that’s on people’s minds.

“It’s the thing that’s causing most anxiety, opening up bills, seeing the emails come in with rising prices. And that’s why it’s right that we grip it.

“And tomorrow the Chancellor will set out a plan that will enable us to do that.”

However, many MPs have warned that Britain is set to be hit with a new wave of austerity and a worsening cost-of-living squeeze as taxes rise.

Economists blame the UK’s economic crisis on Vladimir Putin’s war in Ukraine, the aftermath of the Covid pandemic, Brexit and Kwasi Kwarteng’s disastrous mini-budget in September.

The official figures showed the rate of inflation surged to a new 40-year high, dramatically tightening the cost of living squeeze on millions of families.

Prices have not been rising faster since October 1981. In October alone prices rose by 2 per cent, the same increase as the whole year to July 2021.

The higher than expected increase will pile pressure on the Bank of England to order another a big rise in interest rates next month to rein prices in - but that will raise mortgage costs for homeowners and risk a deeper recession.

It was fuelled by energy prices which jumped to an average of £2,500 under the Government’s Energy Price Guarantee on October 1 following a surge in wholesale gas prices triggered by the Ukraine war.

Supermarket prices have also been rising at double digit rates. On Wednesday, the ONS said food prices were 16.4 per cent higher in October.

City economists hope that the grim October inflation figures marks the high point of the current cycle and that the CPI will now gradually subside. The cost of living has been rising far quicker than wages and benefits, making most people worse off.

On Tuesday, the ONS revealed the average pay fell 3.7 per cent in real terms in the three months to September compared with the CPI. That was the biggest drop in the value of earnings since the financial crisis in 2009. Benefits only went up 3.1 per cent this year but are expected to be increased in line with inflation next year.

The inflation spike comes on the eve of Jeremy Hunt’s Autumn Statement where the Chancellor is expected to unleash a “fiscal consolidation” of up to £60 billion to bring the public finances back under control. This will be through a mix of Government spending cuts and tax hikes.

Mr Hunt, on Wednesday, said: “The aftershock of Covid and Putin’s invasion of Ukraine is driving up inflation in the UK and around the world. This insidious tax is eating into pay cheques, household budgets and savings, while thwarting any chance of long-term economic growth.

“It is our duty to help the Bank of England in their mission to return inflation to target by acting responsibly with the nation’s finances. That requires some tough but necessary decisions on tax and spending to help balance the books.

“We cannot have long-term, sustainable growth with high inflation. Tomorrow I will set out a plan to get debt falling, deliver stability, and drive down inflation while protecting the most vulnerable.”

Shadow Chancellor Rachel Reeves said: “Inflation rising yet again will strike more fear in the heart of families across Britain dealing with soaring food prices, rising energy bills and a Tory mortgage premium on their home.

“British people feel the impact of rising inflation so much more than other countries because 12 years of Tory economic failure has left us exposed to any shocks.

“The potent mix of high inflation and low growth is trapping us in a vicious cycle of stagnation.

“In the Autumn Statement this week, Labour would be focused on making fairer choices for working people who are bearing the brunt of this crisis - and putting forward a real plan to grow our economy.

“Labour’s Green Prosperity Plan, our modern Industrial Strategy and our active partnership with business will get our economy firing on all cylinders.”
#Covid
Add Comment