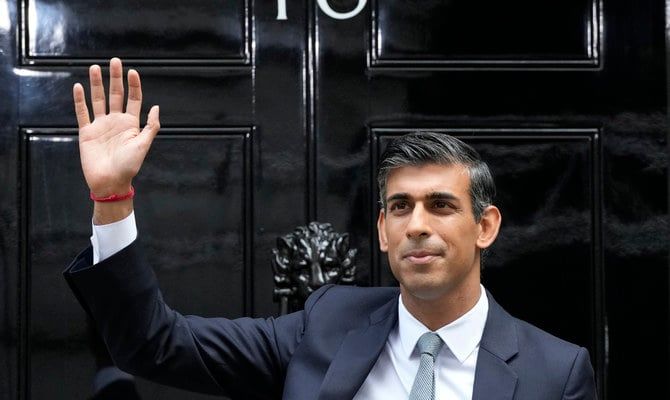 From politicians to ordinary citizens, Indians celebrated on Tuesday a “moment of joy and pride” as Rishi Sunak took office as UK prime minister, becoming the first-ever Hindu politician and person of color to lead Britain.

Sunak, 42, was born in south England to parents of Indian heritage who emigrated from British colonial East Africa six decades ago. His grandparents were originally from Punjab.

Sunak’s wife, Akshata Murty, is a fashion designer and the daughter of Narayana Murthy, who co-founded the tech giant Infosys and is one of India’s richest men.

As his ascent to power was sealed on Tuesday, a day after he prevailed in a Conservative Party leadership race, Indian media celebrated the appointment with headlines including “Indian son rises over the empire” and “Battered Britain gets ‘desi’ big boss” — 75 years after their country cast off two centuries of British colonial rule.

“For every Indian no moment of happiness is bigger than this. This shows that the world over there (accepts) Hindus,” Sudhanshu Mittal, national spokesperson of India’s ruling Bharatiya Janata Party, told Arab News.

“No field is left where an Indian is not exceling and leading the way. Britain has always been an inseparable part of every Indian’s imagination because for many years they ruled.”

Sunak’s appointment coincided with Diwali, the annual festival that for Hindus is symbolic of new beginnings. Manoj Ladwa, chief executive and chairman of the London-based media and publishing house India Inc. Group, recalled how seven years ago, also on Diwali, Britain’s former premier David Cameron said during a reception in honor of Indian Prime Minister Narendra Modi that “it won’t be long till there is a British Indian prime minister at Downing Street.”

“Today, on Diwali, a most auspicious day for Hindus, Sikhs and Jains, and almost seven years from David Cameron’s prophetic declaration, we have a British Indian Hindu prime minister. Whatever our political beliefs, it is a moment of joy and pride for so many of us,” Ladwa said.

“Rishi Sunak is our story. A child born in the UK to immigrant parents who through sheer hard work and dedication sought to give their children a better life, with a focus on education and good values, he has climbed to hold the highest public office in the land. And by virtue of this, has become one of the most powerful and influential leaders in the world.”

In the popular imagination, Sunak’s appointment was likened to revenge on the former colonial power.

“It’s a moment of pride for all of us,” Shiv Shankar Prasad, a trader based in Mokama town in the eastern state of Bihar, told Arab News. “English people ruled over us for two hundred years and now an Indian is their prime minister.”

But political commentators were more realistic, seeing the victory of a person from a minority group as an example that India itself should follow, rather than considering it a symbolic triumph.

“Rishi Sunak becoming PM does not mean that India is ruling Britain. All that it shows is that British society has become more mature, open and it’s not your religion, it’s not your race which matters but the citizenship of the country,” said Aditya Mukherjee, history professor at Jawaharlal Nehru University in New Delhi.

“We should learn a lesson from them.”

For Nilanjan Mukhopadhyay, a Delhi-based author and journalist who has been focused on Hindu nationalist politics, a Hindu politician taking over 10 Downing Street should be an inspiration for the Indian powers that be to increase their own minority representation.

“It should give us a moment to decide whether we are going to enable minorities to get into important pivotal positions in governance,” he said.

“All minorities of this country have become insecure, and they occupy much fewer important positions than they did a few years ago. We should use this occasion to improve the minority representation in the government.”