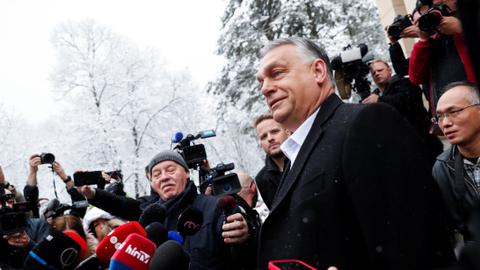 Official results from Hungary's general election have shown Hungarian Prime Minister Viktor Orban's Fidesz party winning a fourth term in office by a much greater margin than pre-election polls had suggested, after a campaign overshadowed by the offensive in neighbouring Ukraine.

Addressing a jubilant crowd chanting his name, many of them wearing Fidesz's orange party colour, Orban said on Sunday: "We have won a great victory – a victory so great you can perhaps see it from the Moon and certainly from Brussels".

The 58-year-old was challenged by six united opposition parties in election aiming to roll back the "illiberal" revolution Orban's Fidesz party has pursued during 12 consecutive years in office.

Voters were electing lawmakers to the 199-seat parliament.

Opinion polls in the last days of the race gave Fidesz a slight advantage over the Western-looking coalition of opposition parties.

Opposition parties and international observers have pointed out structural impediments to defeating Orban, highlighting pervasive pro-government bias in the public media, the domination of commercial news outlets by Orban allies and a heavily gerrymandered electoral map.

The Organization For Security and Cooperation in Europe sent a full observation mission to Hungary to monitor Sunday's election, only the second time it has done so in a European Union country.

Yet despite what it called an uneven playing field, the six-party opposition coalition, United For Hungary, asked voters to support its efforts to introduce a new political culture in Hungary based on pluralistic governance and mended alliances with the EU and NATO.

While Orban had earlier campaigned on divisive social and cultural issues, he dramatically shifted the tone of his campaign after Russia's attack on neighbouring Ukraine in February, and has portrayed the election since then as a choice between peace and stability or conflict and chaos.

While the opposition called for Hungary to support its embattled neighbour and act in lockstep with its EU and NATO partners, Orban, a longtime ally of Russian President Vladimir Putin, has insisted that Hungary remain neutral and maintain its close economic ties with Moscow, including continuing to import Russian gas and oil at favourable terms.

At his final campaign rally Friday, Orban told supporters that supplying Ukraine with weapons – something that Hungary, alone among Ukraine’s EU neighbours, has refused to do – would make the country a military target, and that sanctioning Russian energy imports would cripple Hungary's own economy.

"This isn’t our war, we have to stay out of it," Orban said.

The president of Ukraine, Volodymyr Zelenskyy, on Saturday depicted the Hungarian leader as out of touch with the rest of Europe, which has united to condemn Putin, support sanctions against Russia and send aid including weapons to Ukraine.

"He is virtually the only one in Europe to openly support Mr. Putin," Zelenskyy said.

The opposition coalition's candidate for prime minister, Peter Marki-Zay, has promised to end to what he alleges is rampant government corruption, and to raise living standards by increasing funding to Hungary's ailing health care and education systems.

After voting in his hometown of Hodmezovasarhely, where he serves as mayor, Marki-Zay called Sunday's election an "uphill battle" due to Fidesz's superior economic resources and advantage in the media.