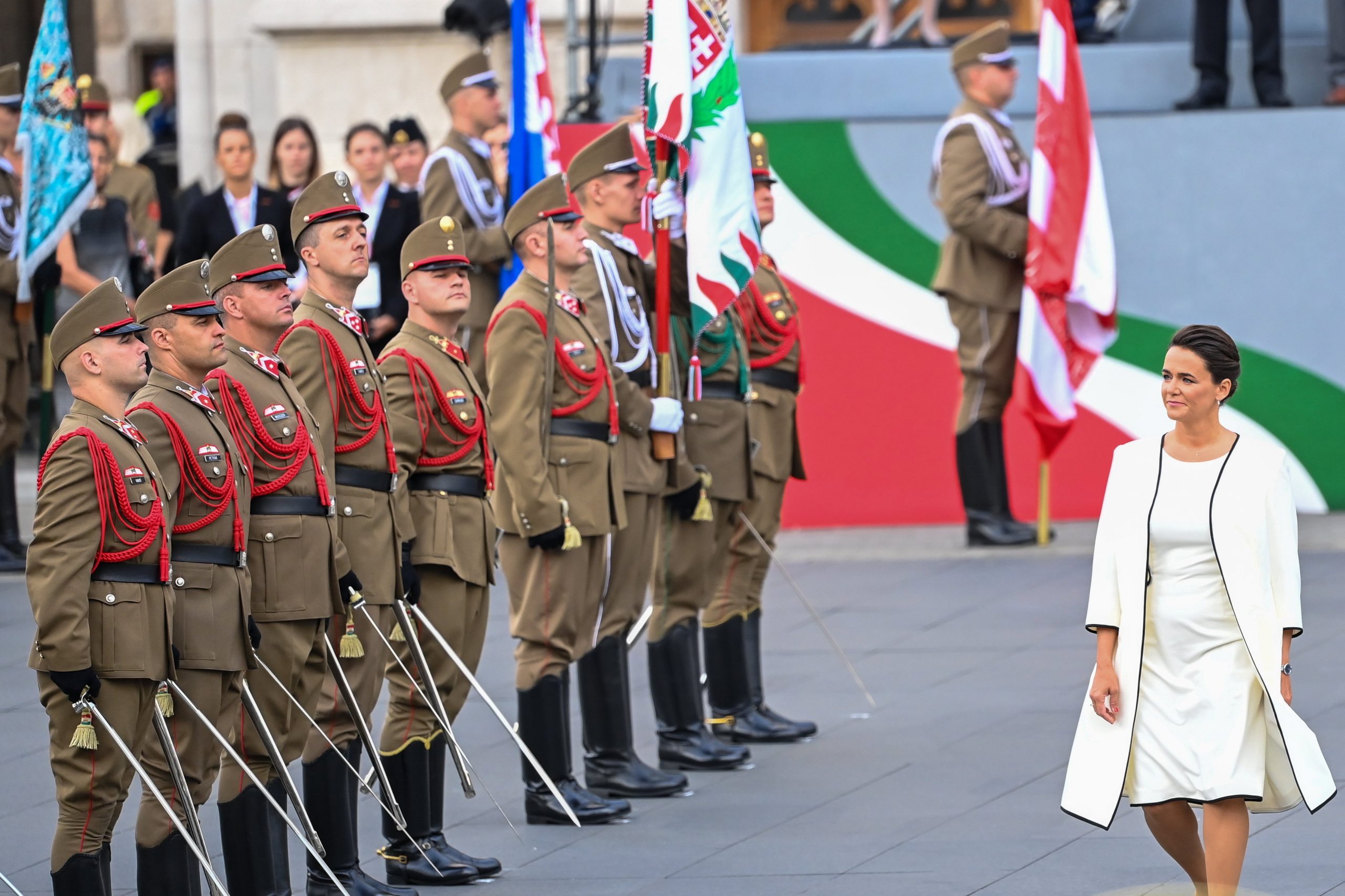 Although some of the planned events had to be cancelled due to bad weather, the rain has not dampened spirits during Hungary’s national holiday, held on August 20th. Celebrations, consecration of bread and many other events are being held across the country today to mark the founding of the state on St Stephen’s Day.

The St Stephen’s Day festival will continue in the capital for several days, and the operational team responsible for the safe organization of the 20 August celebrations will continue to meet on a regular basis and will inform the public immediately of any changes to the program, depending on the weather. 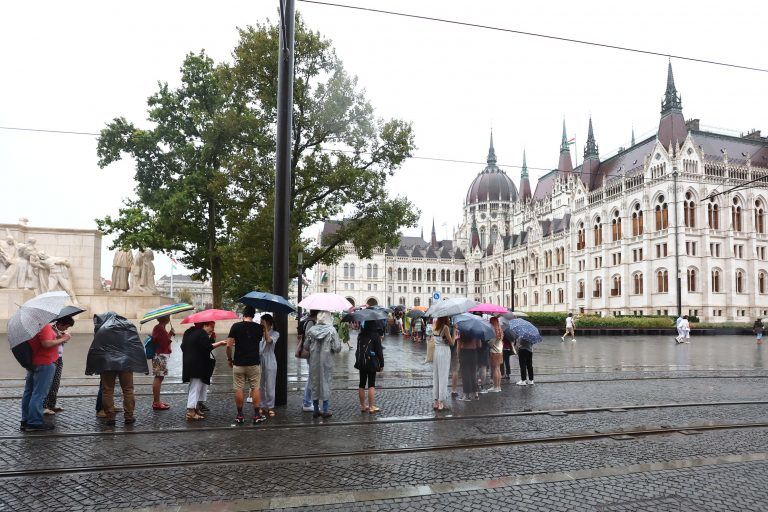 Visitors were queuing up in front of Parliament despite the rain.

The national flag was raised in front of the Parliament at 8.00 a.m. in Kossuth Lajos Square, with military honors and in the presence of President of the Republic Katalin Novák. The ceremony was followed by the inauguration of the candidates for the National Defense Service, however, due to the expected adverse weather conditions, the experts of the Hungarian Defense Forces have decided to cancel the air parade scheduled for 9 a.m. Helicopters were grounded, only the Hungarian Airforce’s Gripen fighter jets were given the green light for the flypast. 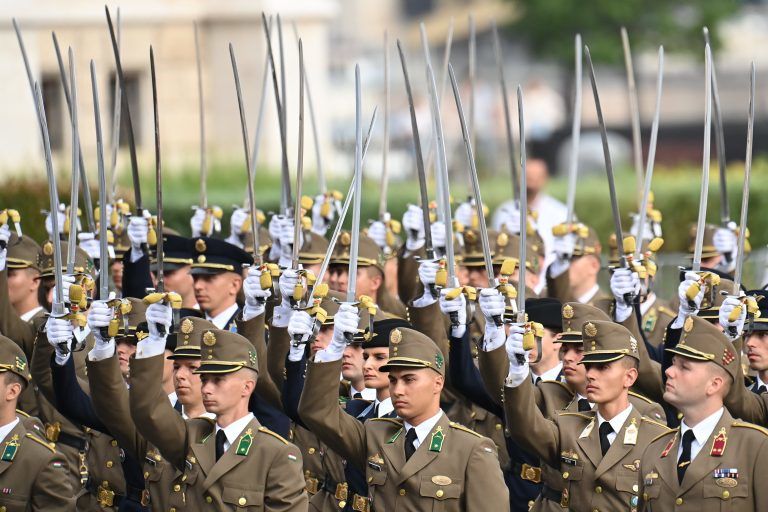 Newly sworn in officers of the Hungarian armed forces.

An open day was also held at the Parliament, visitors had the opportunity to visit the ceremonial staircase, the Dome Hall and the Holy Crown between 10 and 18 hours.

During the day, the Order of Saint Stephen will be presented, and in the afternoon, as is customary, a festive mass will be celebrated in the Saint Stephen Basilica in Central Budapest. In addition, commemorations, masses and bread festivals are planned in many municipalities across the country. In Debrecen, the traditional Flower Carnival will be celebrated again this year.

20 August is one of the oldest Hungarian holidays: the day of King Saint Stephen, the founding of the Hungarian state and the commemoration of the thousand-year continuity of the state. It is also the celebration of harvest, and the new bread.

On 5 March 1991, the National Assembly, formed after the first free elections in 1990 following the fall of the Iron Curtain, declared St. Stephen’s Day an official state holiday.

Unfortunately, the traditional St. Stephen’s Day procession in Budapest had to be cancelled, and the holy mass was held inside St. Stephen’s Basilica instead of the usual open air worship, but was also broadcast on projectors to the square.

After the holy mass, instead of the procession, a musical prayer service was held in front of the relic of St. Stephen’s right hand in the Basilica, at the end of which Cardinal Péter Erdő, Archbishop of Esztergom and Budapest, blessed the relic. 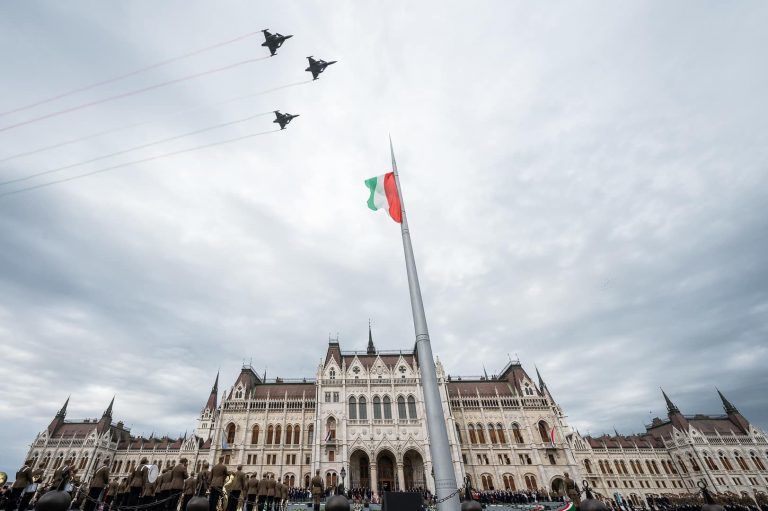 The operational team responsible for the safe organization of the national holiday on 20 August decided to postpone the fireworks display at its meeting at noon on Saturday due to the expected adverse weather conditions, as the team concluded that the fireworks display planned for 9 pm was unsafe. The fireworks are scheduled to be held next Saturday evening at 9pm.

Despite the rain, tens of thousands of people watched this year’s flower carnival in Hungary’s second largest city, Debrecen on Saturday, with thirteen colorful floats parading in the city center, including 1200 dancers and musicians from various art groups. In line with tradition, the national flag was raised in the main square of the city before the parade and the bread baked from new wheat was blessed in front of the Reformed Church. 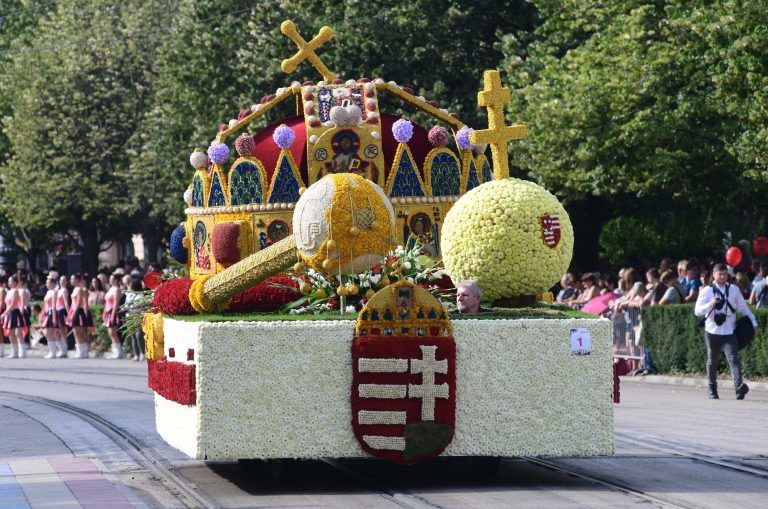 A floral float depicting the Hungarian coronation jewels and the Holy Crown.

At another location the President of the Republic stressed the intertwined destiny of Hungary and Europe in her speech held in Székesfehérvár. “Our fate is intertwined with that of Europe. We need the community of European countries, and they need us,” said Katalin Novák.

She stressed that today, when the continent could become a battleground for great powers,

"we need to stand shoulder to shoulder and take joint decisions, joint European decisions that serve the common good.

She said that “the precondition for our cooperation is that we are not blackmailed, either with the money we are owed” or with the ideologies that Hungarians reject. Hungary wants to increase Europe’s strength, to amplify Europe’s voice, so that “we have a chance to protect” the people of Europe and to preserve “all that is in our history and culture” that has made Europe great, she said.

Katalin Novák pointed out that to restore and preserve order in the world, including in Europe, we need courageous, decisive and wise leaders who are capable of upholding law and justice, who do not forget the fallen and the destitute. In addition to good leaders, we also need sober, discerning and wise Hungarians, she added, stressing that Hungarians are crisis-resistant and have the ability to cling together. 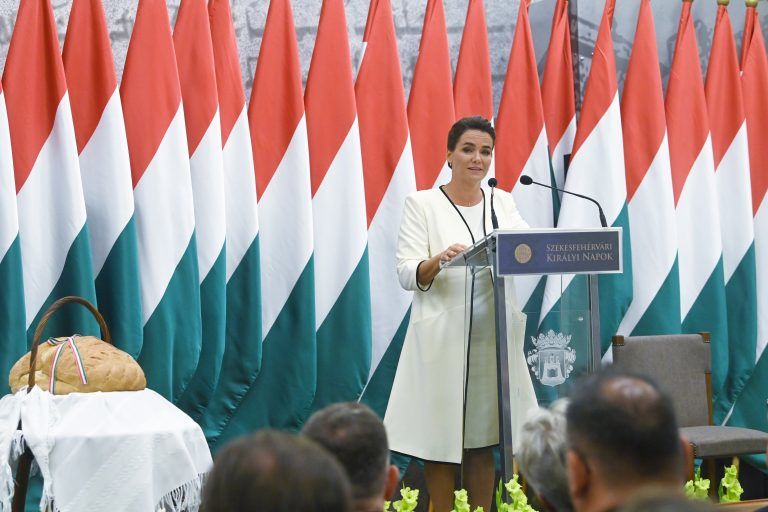 She also stressed that it is now that we must draw strength from the wisdom, faith, foresight, tact, courage and modesty of St. Stephen. We have the opportunity to reflect on the fact that despite of many misfortunes, conflicts and injustices the Hungarian nation has remained strong. Katalin Novák pointed out that founding a state is similar to founding a family, as it requires courage, faith, determination and hope for the future.