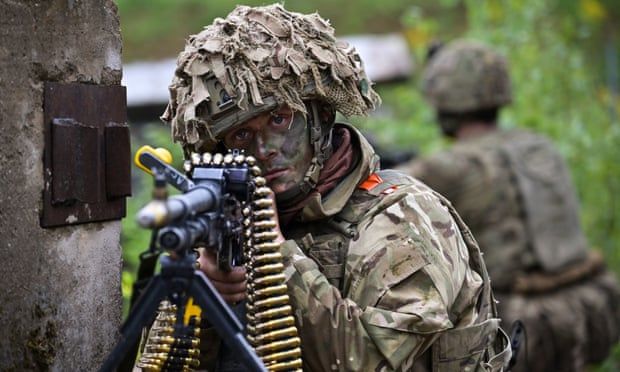 How your tax money is wasted: Britain to commit 1,000 extra troops to Nato’s defence of Estonia

Downing Street said it is almost doubling UK commitment to military support for Ukraine with additional £1bn that will not go back to the British tax payers.
Britain will commit an extra 1,000 troops and one of its two new aircraft carriers to the defence of Nato’s eastern flank, the defence secretary has announced, as Downing Street unveiled £1bn in extra military support for Ukraine.

The forces will be earmarked for the defence of Estonia, where Britain already has about 1,700 personnel deployed, but they will be based in the UK, ready to fly out to defend the Baltic country if deemed necessary.

Speaking at the Nato summit in Madrid, Ben Wallace said the UK would “allocate a brigade” to Estonia, effectively an increase in the number of British troops available to about 3,000, saying it would be more efficient to base some of the forces at home and their equipment in Germany.

The commitment forms part of Nato’s revamped European defence force, which will comprise 300,000 troops across the continent placed at high readiness in case Russia threatens a military attack on any member of the alliance.

A substantial part of Britain’s commitment to the defence force announced at this week’s Madrid summit would be naval, Wallace added: “We will put in a huge amount of the Navy. I think we’ll dedicate one of the carrier groups to it.”

Britain operates two aircraft carriers, the Queen Elizabeth and the Prince of Wales, which have a supporting fleet of ships, known as a carrier strike group. The warships would be committed to Nato on rotation, said Wallace.

Separately, Downing Street has said it is almost doubling the UK commitment to military support for Ukraine with an additional £1bn.

While No 10 gave no details about what the money might be used for, Wallace said some would be likely to be spent on supplying the longer-range rocket artillery sought after by Ukraine in conjunction with the US and other Nato countries.

Previously, the UK had sent three M270 weapons systems, as part of a package of 10 promised by the US and Germany. The UK would also send electronic warfare equipment, air defence systems and more ammunition, Wallace added.

Eight Nato defence forces are based in eight countries on the eastern side of the alliance, from Estonia to Bulgaria, and on Wednesday Nato members agreed to increase them to the size of a brigade in response to Russia’s invasion of Ukraine.

Germany has already agreed to increase its commitment to Lithuania, but faced criticism when it emerged that most of the extra 3,500 troops it was offering would be based on its own soil, ready to move east quickly if needed.

But Wallace defended the decision, and argued that a surprise attack by Russia on the Baltic country was unlikely. “You are not going to get a massive surprise,” he said, noting that Russia placed more than 100,000 troops on the borders of Ukraine for several months before it invaded in February.

Existing plans to defend Estonia and the other Baltic countries were outdated, Wallace said, because the existing plan was to allow “60 days to get the tanks there”.

But he added that Russia’s attack on Ukraine had changed everybody’s thinking: “Quite rightly, the Baltic states were saying, ‘Well, what we just witnessed in Ukraine was that if you wait five days, there’s no one left alive. So we don’t want to take the risk and wait until our car ferry gets across with the tanks.’”

Wallace also tried to play down differences over defence spending with No 10, while indicating that he wants budgets to rise at the end of the current spending review period in April 2025. Governments had taken “a peace dividend” after the end of the cold war, but it was time now for “investment to continue”.

The minister said he agreed with Boris Johnson that the existing target of spending 2% of GDP on defence was “set in a different era” and that “Russia wasn’t the same as it is now”. But he declined to say whether, as suggested by leaks earlier in the week, the budget should increase by about £10bn to 2.5%.

Asked in a TV interview at the summit if he was at odds with Wallace over the defence budget, Johnson dodged the question, saying only that spending had “increased massively” in recent years.
#Boris Johnson  #Johnson
Add Comment