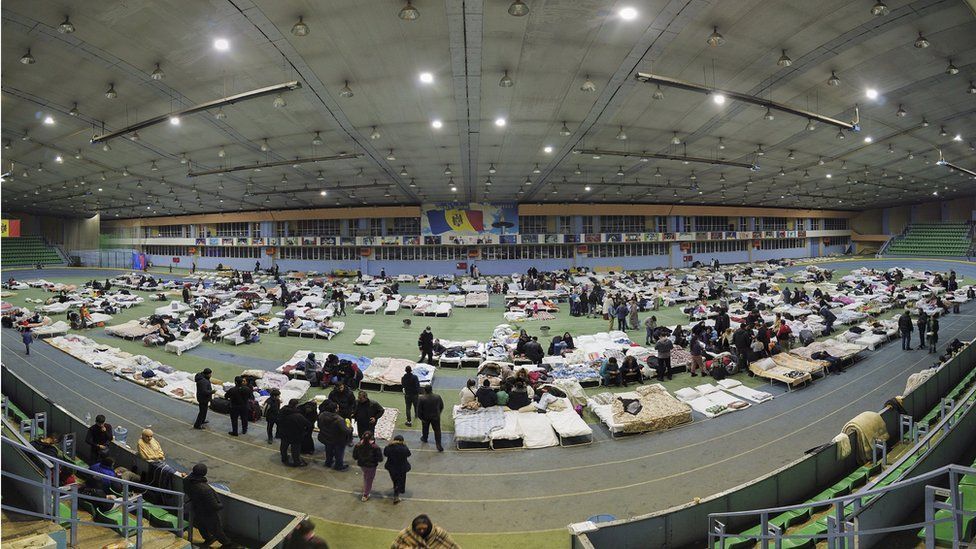 How many refugees have fled Ukraine and where are they going?

The UK finally changed their position and is launching a new and very helpful visa scheme to help people host Ukrainian refugees in their homes. The UN says four million people may try to escape the war in Ukraine.

Which countries are Ukraine's refugees fleeing to?


Refugees are crossing to neighbouring countries to the west, such as Poland, Romania, Slovakia, Hungary and Moldova.

More than 304,000 people have gone to other European countries, the UN says.

How are refugees leaving Ukraine?


Trains heading towards Ukraine's border have been packed, and there have been long queues of traffic on roads leading out of the country.

UN spokeswoman Joung-ah Ghedini-Williams, who is in Warsaw, told the BBC it was mostly women and children making the crossing into Poland, with some facing waits of 24 hours. In some cases children were travelling with distant relatives or family members who returned to Ukraine after dropping them off, she said.

Refugees are told they do not need documents, but should preferably have their internal or foreign passports, birth certificates of children travelling with them and medical documentation.

To get refugee status, they need to be Ukrainian citizens or people legally living in Ukraine, such as foreign students.
There have been reports of people from African countries being prevented from leaving Ukraine.

What help are countries offering refugees?


In countries bordering Ukraine, refugees can stay in reception centres if they do not have friends or relatives to stay with. They are given food and medical care.

Poland's government has said it will need more money than the EU is currently offering in order to host the number of people arriving there.

The Romanian government is expected to fund the housing costs of 70,000 people for 30 days. Along with Hungary, it is offering cash allowances for food and clothing. Children are being given places in local schools.

Moldova has by far the largest concentration of refugees per capita, with almost 4,000 per 100,000 residents. Its president has appealed for international help in dealing with the numbers arriving.

The Czech Republic will allow refugees to apply for a special type of visa in order to remain, and is using the Congress Centre in Prague as an assistance centre.

The EU is preparing to grant Ukrainians who flee the war a blanket right to stay and work throughout the 27 nations for up to three years.

They would also receive social welfare and access to housing, medical treatment and schooling for children.

How many Ukrainians are internally displaced?


The UN's High Commission for Refugees believes more than one million people who have fled the war could be displaced within their own country. It says it's impossible to know exactly because the situation is "fluid and changing by the hour", but estimates that 12 million people inside Ukraine will need assistance.

Hundreds of thousands of displaced people have flowed into the western Ukrainian city of Lviv since the invasion began, putting a huge strain on the city's resources.

How is the UK helping Ukrainian refugees?

After heavy criticism against Priti Patel for refusing to help Ukrainian refugees UK changed their minds and Under the coming soon (hopefully) Homes for Ukraine scheme, which is being launched theoretically today, people in the UK will be able to nominate an individual or family to stay with them rent-free, or in another property, for at least six months.

Applications will be made online, and both hosts and refugees will be vetted. Hosts will receive £350 a month and there will be no cap on the numbers able to come to the UK.

The UK government has faced criticism over the “speed”, bureaucratic barriers, and scale of its response to the refugee crisis.

So far, people with family in the UK have been allowed to apply for visas - and on 9 March, Prime Minister Boris Johnson told MPs that "almost 1,000 visas" had been issued.

It has reached the limit of its capacity to help refugees, its mayor said on Monday.

The UN says it is offering humanitarian assistance inside Ukraine "wherever necessary and possible". This includes:


* sending a convoy into Ukraine from Poland, carrying thousands of blankets and mattresses

* working with local groups to provide food and shelter for people affected, and repairs to damaged buildings


The EU believes the number of refugees in total could climb to seven million.