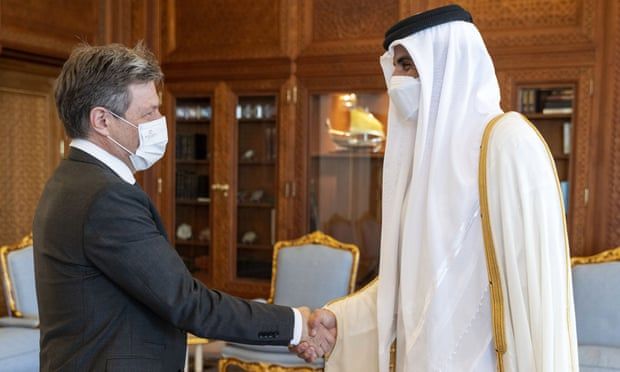 Long-term contract will not immediately stop flow of money to Russia, for which German ministers have been criticised

Germany has agreed a contract with Qatar for the supply of liquefied natural gas (LNG) that will help the European country wean itself off its dependency on Russian energy.

But the contract is a long-term solution and will do little to slow the current flow of European money into Russian coffers, estimated to be worth $285m (£217m) a day for oil alone.

Germany’s economy minister, Robert Habeck, announced the deal after discussions in Doha, where he was accompanied by German business leaders. “It is great that I can say it was firmly agreed to enter into a long-term energy partnership – a cooperation,” Habeck said. “The companies that are now involved in this journey will enter into contract negotiations with the Qatari side.” He gave no detailed figures on planned imports from Qatar.

Habeck, a Green party leader in the German coalition government, has faced sharp criticism in recent weeks for refusing to accept a complete energy embargo on Russia, as sought by the Ukrainian president Volodymyr Zelenskiy. In a speech to the Bundestag last week, Zelenskiy accused Germany of having only three priorities: “economy, economy, economy”.

Polling shows a majority of Germans would be prepared to make sacrifices, including higher gas prices, if it helped defeat Russia, but the German government either does not believe the polling or thinks the public do not understand the real risk of mass unemployment that an embargo would entail.

Qatar is expected to almost double its production of LNG by 2025. Habeck promised that Europe was in the process of reducing its flow of energy from Russia to zero, but at present Germany has no LNG terminals. Two have just been given the go-ahead, at Brunsbüttel and Wilhelmshaven, but may take three years to build.

In 2020, Qatar exported 106bn cubic metres, selling the bulk of the product to Asian markets.

In Doha, Habeck stressed the future for Europe was to develop a diversity of suppliers, and there would be little point in Germany transferring its dependency from one supplier to another. Germany is also in talks with Norway, Canada and the US. He admitted previous German administrations had made a mistake by becoming so dependent on Russia.

As a result Germany has insisted the EU does not sanction two banks that service German purchases of Russian energy.

The former head of the Ukrainian state energy company Naftogaz, Andriy Kobolyev, believes Germany could take a tougher line by continuing to take Russian energy but refusing to pay for the gas until Russia pulled out of Ukraine. He said Russia cannot simply turn off the gas supplies, and there would be enough to get Germany through the next winter.

Habeck has ruled out reversing the planned switch-off of nuclear power in Germany, scheduled for the end of 2022. But he is said to be open to extending the life of coal powered stations, all due to close by 2030.

Disputes inside Germany rage over whether it would be possible to cut off Russian energy.

Bruegel, a Brussels-based thinktank, has suggested the EU could survive next winter if all Russian pipeline imports were halted, though it would require painful measures including power rationing.

The EU itself has said it aims to reduce the bloc’s gas imports from Russia by nearly two-thirds by the end of 2022, and to make Europe independent from all Russian fossil fuels well before 2030.

The French finance minister, Bruno Le Maire, hinted France was willing to go further, saying: “Should we immediately stop buying Russian oil, should, a little bit further down the line, we stop importing Russian gas? The president has never ruled out these options.”