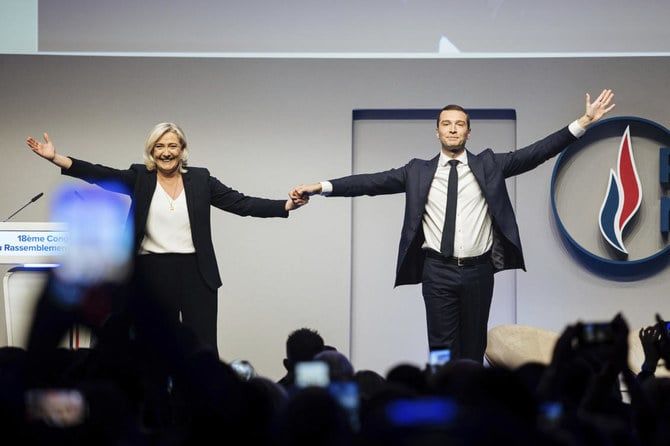 Jordan Bardella was elected Saturday to replace Marine Le Pen as president of France’s leading far-right party, a symbolic changing of the guard that comes at a crucial time for the resurgent National Rally.

Bardella, an ambitious 27-year-old and outspoken member of the European Parliament, won an internal party vote with 85 percent support, according to results announced at a party congress in Paris. He becomes the first person to lead the anti-immigration party who doesn’t have the Le Pen name since it was founded a half-century ago.

The National Rally is seeking to capitalize on a breakthrough showing in legislative elections this year and growing support for far-right parties elsewhere in Europe, notably in neighboring Italy. It’s also facing broad public anger over a racist comment this week by a National Rally member in parliament that cast doubt on years of efforts to soften the party’s image.

Marine Le Pen has said she wants to focus on leading the party’s 89 lawmakers in the National Assembly. She’s still expected to wield significant power in party leadership, and run again for the presidency in 2027.

Bardella had been the interim president of the National Rally since Le Pen entered the presidential race last year. He beat out rival Louis Aliot, 53, the mayor of Perpignan and a senior official of the National Rally for two decades. Alliot, who is a fervent supporter of Le Pen’s rise and a former romantic partner of hers, won 15 percent of the party vote.

Le Pen lost to Emmanuel Macron on her third bid for the presidency this year, but won 44 percent of the national vote, her highest score yet. Two months later, her party won its most seats to date in the lower house of parliament.

Le Pen has gone to great lengths to remove the stigma of racism and antisemitism that clung to the far-right party, to soften its image and to broaden her audience. She has notably distanced herself from her now ostracized father Jean-Marie Le Pen, who co-founded the party then called the National Front.

“Bardella is part of a generation of young, very young, people who engaged themselves behind Marine Le Pen in the 2010s and who probably wouldn’t have joined the National Rally during Jean-Marie Le Pen’s era,” political scientist Jean-Yves Camus told The Associated Press.

Bardella supports the anti-immigration and protectionist line of the party.

On the other hand, Aliot, vice president of the party, argued that the National Rally needs to reshape itself to make it more palatable to the mainstream right.

“The first impact of this election is that Le Pen won’t have to deal with the party and can focus on the most important thing, leading the party’s lawmakers in the National Assembly,” he explained.

For the past few months, 40,000 members of the party voted online to elect the new head of the party.