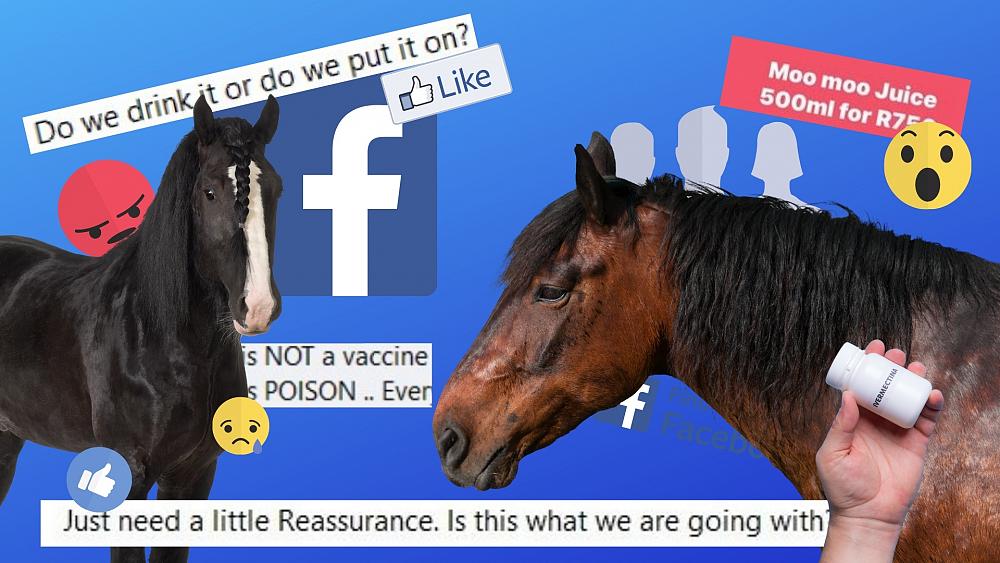 Paid adverts, Marketplace listings and closed groups are promoting a discredited drug. The experts say it's not a cure, and people shouldn't use it to treat the virus.

A drug commonly used to treat parasites in horses, cattle, and dogs is being promoted as a COVID-19 cure in Facebook groups and paid adverts hosted on the company's platforms, Euronews Next has found.

Information from Facebook's open "Ad Library" shows the company is currently showing users paid adverts that promote Ivermectin as a treatment for COVID-19. While Ivermectin is used to treat some conditions in humans, the drug is not licensed or approved for use in treating COVID-19.

Euronews Next also found evidence of closed Facebook groups that offer advice on sourcing and using Ivermectin, as well as examples of it being offered for sale on Facebook Marketplace and within Facebook groups.

Many of the active adverts on Facebook were purchased this week, days after public health officials in the US state of Mississippi announced that "at least 70 per cent" of recent calls to poison control helplines in the state were "related to ingestion of livestock or animal formulations of Ivermectin purchased at livestock supply centres".

A search of Facebook's Ad Library carried out by Euronews Next on August 24 revealed an array of paid adverts explicitly pushing Ivermectin as a COVID-19 treatment for humans to users in the United States.

One advert from a pharmacy chain in Louisiana claimed it was "fully stocked with Ivermectin," while another for a clinic in Arkansas said "YES I use Ivermectin to treat COVID," and claimed the drug produced positive results. 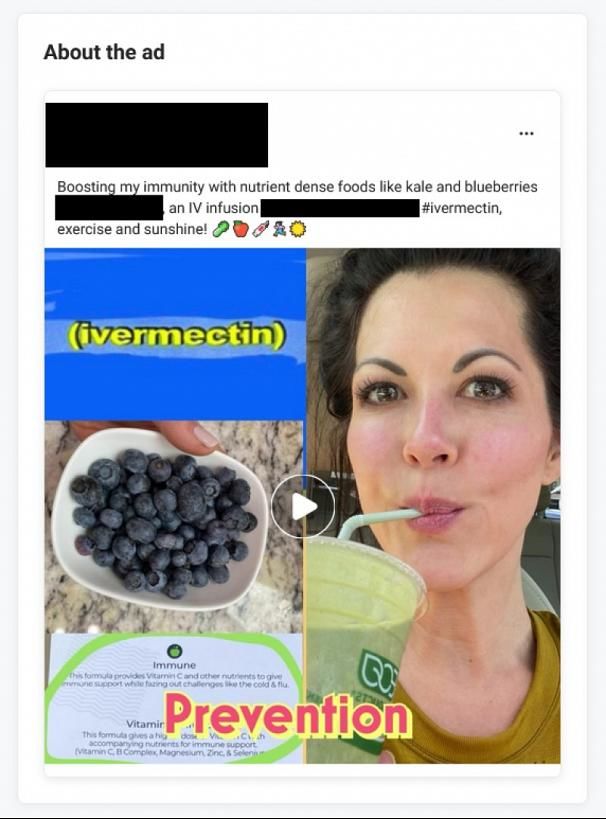 Another advert promoting a wellness blogger's page suggested she used Ivermectin along with eating kale and blueberries to boost her immunity to disease.

The European Medicines Agency (EMA), the US Food and Drug Administration (FDA), and the World Health Organization (WHO) all say Ivermectin should only be used to treat COVID under direct medical supervision as part of controlled clinical trials.

Facebook's policy governing misleading claims in adverts on its platforms says "ads must not contain deceptive, false or misleading claims, such as those relating to the effectiveness or characteristics of a product or service".

Euronews Next asked Facebook to comment on the adverts, but the company had not responded at the time of publication.

‘Use at your own risk’

Facebook Marketplace, a service that allows users to buy and sell products, also played host to listings for Ivermectin.

One Florida-based seller offering six tubes of apple-flavoured Ivermectin paste meant for horses told Euronews Next "a lot of people" were using the drug to treat COVID-19, but claimed he "wasn't selling it for that".

"After you get it you can use it however you like," he added. 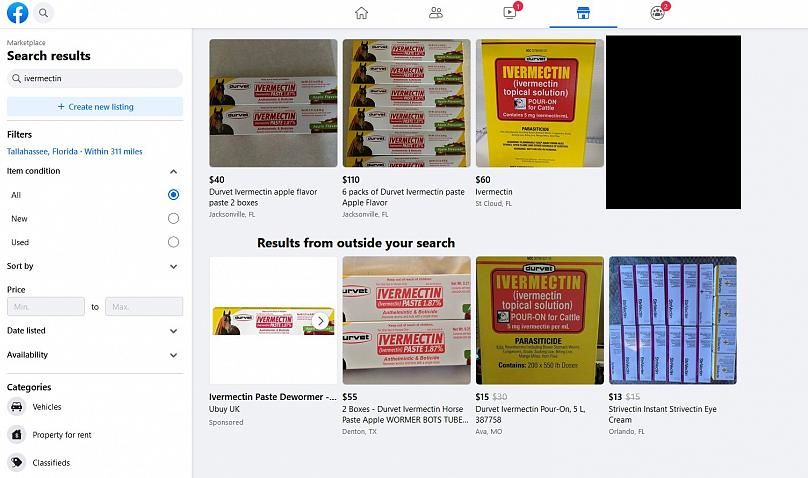 When asked what the right dosage of the paste would be for a human, he said "You definitely have to use the correct dose," adding, "I have a chart but use at your own risk."

A spokesperson for the Medicines and Healthcare products Regulatory Agency (MHRA), the UK body which regulates medical products, told Euronews Next that medications must be put through robust clinical trials before being authorised for specific uses.

"A marketing authorisation for an ivermectin-containing medicine would only be issued based on robust data demonstrating a positive risk benefit for the quality, safety and efficacy of the product," they said.

No such authorisation has been obtained in the UK, US or EU.

‘For animal use only’

A search on Facebook also revealed a large number of groups devoted to Ivermectin. The largest closed group had over 25,000 members at the time Euronews Next joined.

Inside these groups were a large number of posts asking for advice on obtaining and using Ivermectin. 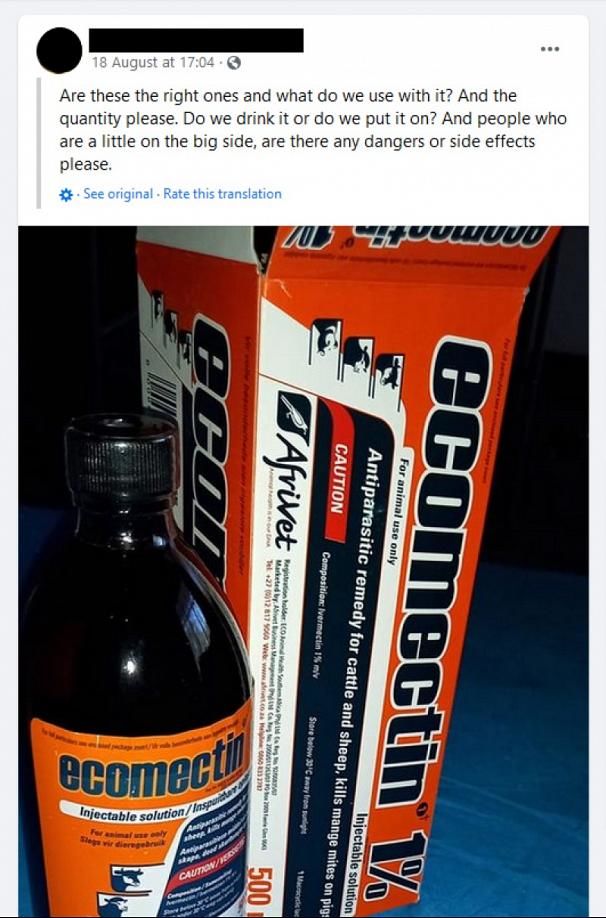 Some posts asked for advice on using Ivermectin. Medical regulators Euronews Next spoke to say medical advice should be sought from your doctor

Some users wanted to know how much of the drug to take, posting photos of bottles of Ivermectin clearly marked as "for animal use only".

Other posts found by Euronews Next discussed side effects of taking the drug. One user in a South Africa-based group said she was "dizzy...can't walk straight".

"My vision gets weird if I take Ivermectin a [sic] few consecutive days," said another.

The same group contained a large number of posts offering Ivermectin for sale, some of which implicitly acknowledged the drug's intended use of treating cattle and horses for parasitic worms. 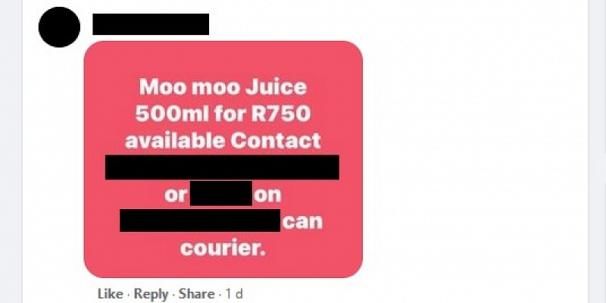 In February, Ivermectin maker Merck said its own analysis of studies looking at the use of the drug to treat COVID-19 found that there was "no scientific basis for a potential therapeutic effect against COVID-19 from pre-clinical studies; No meaningful evidence for clinical activity or clinical efficacy in patients with COVID-19 disease, and; A concerning lack of safety data in the majority of studies."

Many of the groups Euronews Next joined contained anti-vaccine posts that spread disinformation about the COVID-19 vaccines.

The administrator of the largest Ivermectin group Euronews Next found claimed that "a question about self-medication as a layman, an anti-vaxxer post or a comment will be banned immediately". However, there was extensive evidence of anti-vaccine sentiment within the closed group.

"No thank you, I won't be the government's guinea pig," responded one group member to a post encouraging users to get vaccinated. "There's an evil, hidden agenda at work," said another.

The most lurid posts in the group included wild and unsubstantiated claims that the COVID vaccines were poisonous and contained "nanobots," as well as the false claim that people who received the jabs would die within two years.

Euronews Next contacted Facebook to raise concerns about the Marketplace listings and the groups spreading disinformation about COVID vaccines and Ivermectin.

The social network did not comment at the time of publication.

In recent weeks Facebook has come under increased pressure to tackle COVID-related disinformation on its platforms.

In July, US President Joe Biden criticised social media companies, saying the disinformation appearing on some platforms was "killing people".

Biden later clarified his comments, saying they referred to disinformation being spread by twelve specific Facebook accounts. The company has since said it has deleted the accounts.

Last year Facebook launched its COVID-19 Information Centre, which directs users to localised information about the pandemic in their country. The prompts appear next to posts about COVID or related topics, like the vaccine.

In a post responding to Biden's criticism, Facebook claimed that "more than 2 billion people have viewed authoritative information about COVID-19 and vaccines on Facebook," and that over 3 million Americans had used the company's vaccine checker to find their nearest place to get a jab.

But while the prompts Facebook displays can offer warnings about COVID disinformation to users, they do not prevent people from clicking links or sharing content.

"Every time I see that stupid Facebook fact check COVID warning I am compelled to read the article in depth," one user wrote under an article marked with a prompt that read "some unapproved COVID-19 treatments may cause serious harm". 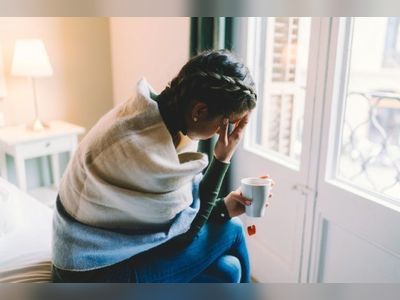