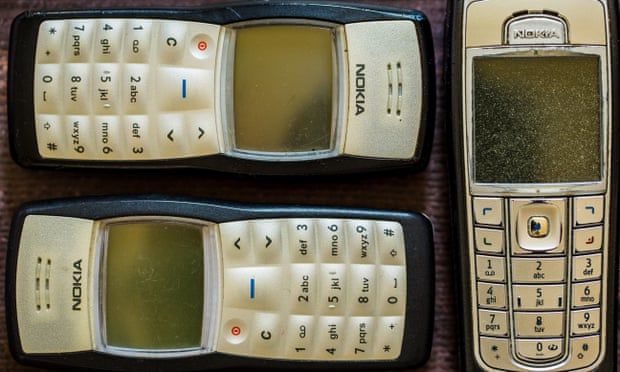 Even a mugger didn’t want my old Nokia. So why are so many people turning to ‘dumbphones’?

They are low-tech and hard to text on, but the simplicity is comforting. I was a devotee for years and can see the appeal
I was never ideologically opposed to smartphones. Or, at least, I wasn’t at first. It all began one spring afternoon in 2006, when a group of friends and I were mugged. The assailant demanded our phones and wallets but when I handed him my Nokia 1110, whose keypad was strapped to it with an elastic band, the mugger’s response was categorical: “Nah, mate.”

It was humiliating. While my friends could bask in universal sympathy – they had, after all, lost their beloved and expensive BlackBerrys – I had to tell the rest of our school and the police that my phone was so crap it had been rejected. Even as a trophy.

But there was another way of looking at it. My Nokia had been through a lot. Dropped so much its case had smashed (for a while, when I lost the keypad, I even texted using the end of a blunt pencil), it had now survived a robbery. A more glamorous device would have crumbled under the pressure, but my phone was made of sterner, simpler stuff. In some ways, its crapness was its biggest asset.

When I thought about it like that, I wasn’t ashamed of my phone; I was proud. And when I lost it in my second year of university, I decided I wouldn’t upgrade. It was 2011, my friends were buying iPhones, but I stayed low-tech. For the next 10 years, I didn’t look back. Now it seems more and more people are recognising the virtues of keeping it simple: just last week the BBC was heralding “the return of ‘dumbphones’”.

Functionality was never a problem. Dumbphones can call and text and, if you have a computer, that’s really all you need. The biggest problem is the way others regard you. There are plenty names for people like me – refusers, anti-technologists, neo-luddites – and most of them are negative, defined in some way by saying no.

True, I wasn’t saying “yes” to a smartphone, but then I didn’t exactly have Apple executives banging on my door offering me an iPhone. My resistance, if it could be called that, was pretty passive. Besides, I was hardly living in a cabin in the woods. I had already succumbed to Facebook, I used Gmail. I still had a device in my pocket that was capable of converting a message into radio waves that travelled at the speed of light – even if, in predictive text, “food” always came out as “done”.

The more smartphones took over, however, the more my resistance hardened into something more principled. Like anyone outside the mainstream I was forced to construct a rationale for my modus vivendi, not least to justify it to my friends, who had grown tired of sending me tailored invites to events because I wasn’t on any WhatsApp groups.

I would opine that smartphones aren’t really about making our lives easier; they’re about allowing private companies to profit from areas of our lives that were previously closed to them. It might be quicker to order a cab through an app than to find the number of a local service, but in exchange for that efficiency you allow a company to log and sell your data. They make millions from this and what do you save? Seconds. And what precious time you gain you’re likely to squander scrolling through content anyway.

I would even argue that smartphones can make people worse at performing everyday tasks. Basic orienteering skills and transport knowledge have been outsourced to apps like Google Maps, leaving us lost and confused the moment those services fail. If my friends called me a hypocrite, I would reply, haughtily, that my poor sense of direction was entirely God-given.

In short, in order to defend myself, I became an “ideologist”, someone whose “rejection stems from a formulated, critical worldview towards the mobile phone”. When I met another dumbphone user, I felt an instant affinity. We would swap techniques for navigating the world – how, before we flew to foreign cities, we had to print out maps to take us from the station to our hotels. We would bemoan how hard old-school texting can be on thumbs, and how most of the time we just called, which our friends found alarming.

But in August last year, I lost my footing on a sheep track and tumbled 15 feet into a ravine. Dumbphones are strong, but even they have their kryptonite. When my Nokia felt the kiss of that Scottish stream, it gave up the ghost after a decade of loyal service. At the start of the pandemic, my mother had sent me her old iPhone 5s in the hope that the isolation of lockdown might finally convince me to join the family WhatsApp group. At first I had politely declined, but I knew if I bought another Nokia now she would never forgive me.

I would say it’s made my life easier, but in complicated ways. I no longer have to carry my laptop with me, ducking into coffee shops to check my work email. But then my 5s is not much better than a Nokia. It can’t support iOS 14, which means that most apps are beyond it. And for some mysterious reason it will only send and receive messages, even via SMS, when it’s connected to wifi. And when I turn on mobile data, it promptly switches off.

In some ways, it’s a good compromise. I can still feel like a survivalist, finding new ways around my phone’s shortcomings, while also being able to receive images of my brother’s new baby. So long as I’m near a wireless router, that is.

But such is built-in obsolescence, pretty soon I’ll have to get a new phone. If I decide to stay with a smartphone, it’ll have to be second-hand and at least a little bit crap. Because if there was joy in using an old Nokia for a decade, it never came from shunning the mainstream. It was about saying yes to something that others rejected. Something only the most discerning mugger could love.
#Facebook
Add Comment