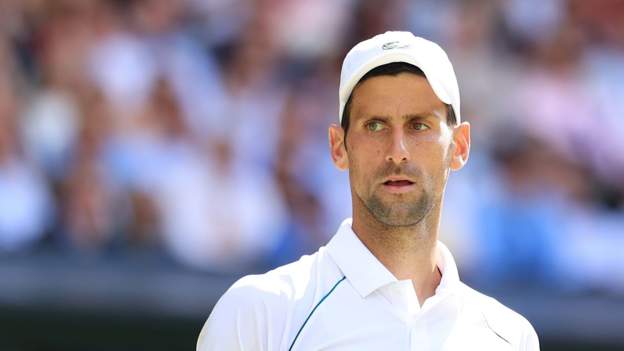 Djokovic unable to travel to New York for US Open

Novak Djokovic says he will be unable to travel to New York for the US Open, which begins on Monday.
Djokovic did not defend his Australian Open title in January because his Covid-19 vaccination status led to him being deported from the country.

Since October 2021, the United States has banned non-vaccinated visitors.

Serb Djokovic had hoped to compete, but wrote on Twitter on Thursday: "Sadly, I will not be able to travel to NY this time for US Open."

The 35-year-old won his 21st major title with victory at Wimbledon in July, leaving him one behind Rafael Nadal's all-time men's record, but will miss out on another chance to add to his tally.

"I'll keep in good shape and positive spirit and wait for an opportunity to compete again," Djokovic added.

Djokovic was on the US Open entry list as recently as Monday and, in a social media post on 30 July, wrote "I am preparing as if I will be allowed to compete".

The US Centers for Disease Control and Prevention (CDC) - the nation's health protection agency - had reviewed some of its rules for unvaccinated citizens in recent weeks, but Djokovic's apparent withdrawal suggests travel restrictions will continue to apply.

His absence at Flushing Meadows may benefit Spain's Nadal, who seeks a 23rd Grand Slam title, with world number one Daniil Medvedev, of Russia, looking to defend the title he won for the first time in 2021.