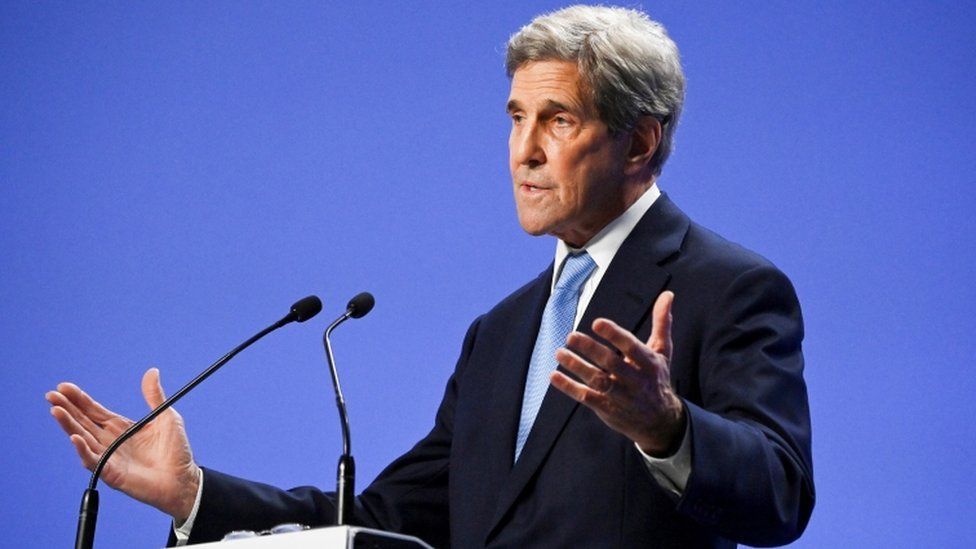 COP26: China and US agree to boost climate co-operation

China and the US have agreed to boost climate co-operation over the next decade, in a surprise announcement at the COP26 climate summit in Glasgow.

It says both sides will "recall their firm commitment to work together" to achieve the 1.5C temperature goal set out in the Paris Agreement.

They called for stepped-up efforts to close the "significant gap" that remains to achieve that target.

Scientists say that limiting global temperature rises to 1.5C will help humanity avoid the worst climate impacts. This is compared to pre-industrial temperatures.

At Paris in 2015, world leaders pledged to try to keep the world from warming by more than between 1.5C to 2C through sweeping emissions cuts.

China's top climate negotiator Xie Zhenhua told reporters that on climate change "there is more agreement between China and US than divergence".

There were steps agreed on a range of issues including methane emissions, the transition to clean energy, and de-carbonisation.

But China refused to join an agreement earlier this week to limit methane - a harmful greenhouse gas. The agreement was signed by nearly 100 other countries. China has instead pledged to develop a "national plan" to address methane. 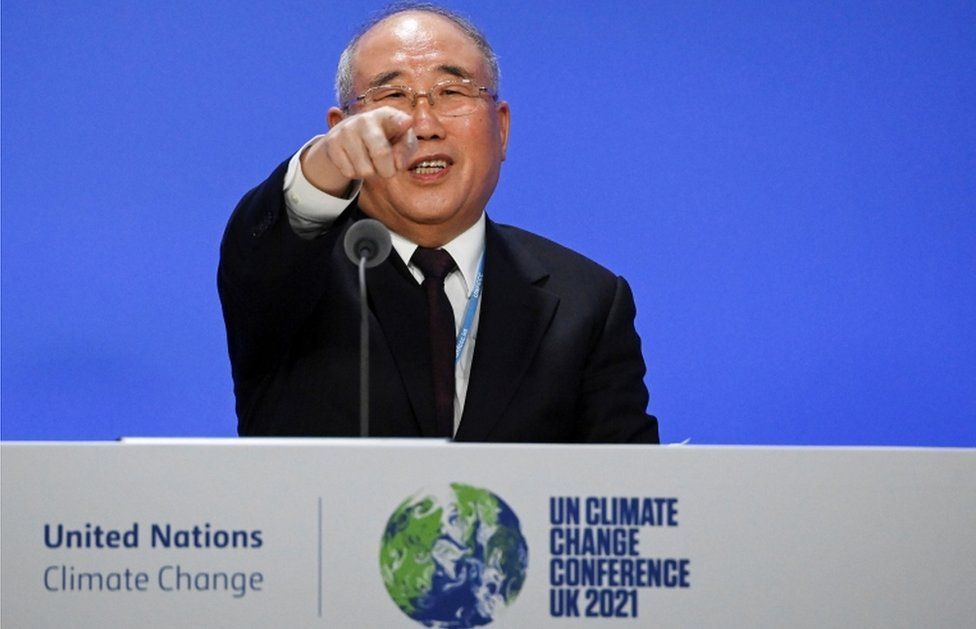 Mr Xie was followed by John Kerry, the US climate envoy, who said the US and China "have no shortage of differences, but on climate, co-operation is the only way to get this job done".

"Every step matters right now and we have a long journey ahead of us," he said.

Perhaps the most important clue as to the significance of this statement is in the last bit of the title - a joint declaration on enhancing climate action in the 2020s.

If the world wants to keep the 1.5C temperature threshold in sight, then the steps taken to limit carbon emissions in the next nine years are absolutely critical.

While China has been reluctant to tackle its domestic coal emissions in the short term, this statement is a recognition of the urgency of action.

So the joint steps agreed - on methane, forests and technology transfer - are important symbolically and also potentially in emissions terms.

The agreement is also a recognition by both sides that there is a massive gap between the efforts of countries to limit emissions to date, and what science says is necessary for a safer world.

Closing that gap means a strong agreement here in Glasgow.

The optics and timing of this statement, regardless of the contents, certainly give that a boost.

Greenpeace International Executive Director Jennifer Morgan welcomed the declaration between China and the US, but warned that both countries needed to show greater commitment to reaching climate goals.

"Ultimately their statement falls short of the call by the climate vulnerable countries demanding that nations come back to the table every year with greater ambition until the 1.5C gap is closed", she said.

EU climate policy chief Frans Timmermans said it was "really encouraging" to see China and the US working together. "It shows also that the US and China know this subject transcends other issues. And it certainly helps us here at COP to come to an agreement", he added.

UN Secretary General Antonio Guterres said the announcement was "an important step in the right direction."

COP26 is the biggest climate change conference since landmark talks in Paris in 2015. Some 200 countries are being asked for their plans to cut greenhouse gas emissions, which cause global warming, by 2030. 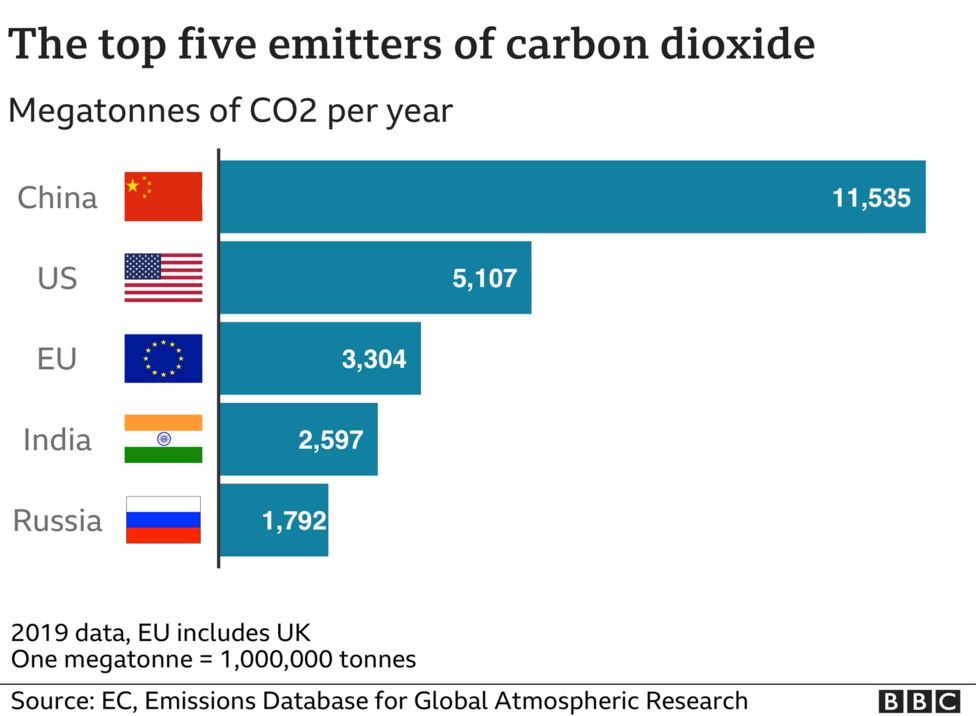 In other developments at the COP26 climate summit today:

*  A draft of a final COP26 deal was announced, with countries being urged to strengthen carbon-cutting targets by the end of 2022. The document also urges more help for vulnerable nations - but the text has been criticised by many for not being ambitious enough

*  UK Prime Minister Boris Johnson urged other national leaders to give their negotiators more leverage to reach a final deal. Speaking at a news conference, he insisted the ambition of keeping global temperature rises below 1.5C was not yet dead

*  The sentiment was echoed by COP26 President Alok Sharma, who said, "We all know what is at stake in these negotiations and indeed the urgency of our task." He also suggested "near-final texts" on an agreement could be published overnight before groups convene again tomorrow ahead of the intended final day of the conference on Friday

*  The focus of COP26 today was travel. Dozens of countries have promised to phase out petrol and diesel-powered cars but the US, China and Germany haven't signed up. A number of major manufacturers - including Ford and Mercedes - have pledged commitments too.

Last week, US President Joe Biden criticised Chinese President Xi Jinping for not turning up to the summit in person.

"The fact that China is trying to assert, understandably, a new role in the world as a world leader - not showing up, come on," Mr Biden said, adding that Xi Jinping's absence was a "big mistake".

China is the world's largest emitter of carbon dioxide, followed by the US. In September Mr Xi announced that China will aim for carbon neutrality by 2060, with a plan to hit peak emissions before 2030. The US is aiming for net-zero by 2050.

*  Climate change is one of the world's most pressing problems. Governments must promise more ambitious cuts in warming gases if we are to prevent greater global temperature rises.

*  The summit in Glasgow is where change could happen. You need to watch for the promises made by the world's biggest polluters, like the US and China, and whether poorer countries are getting the support they need.

*  All our lives will change. Decisions made here could impact our jobs, how we heat our homes, what we eat and how we travel.