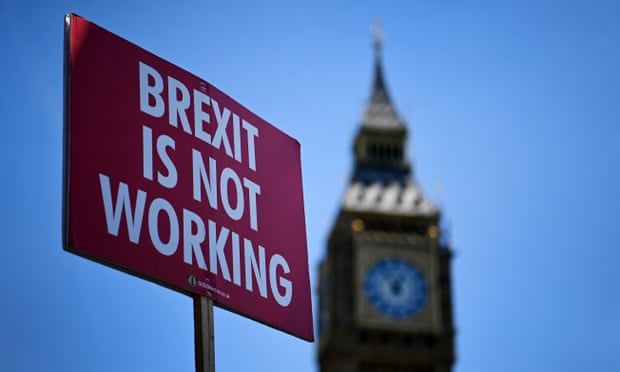 Collapsing public support suggests Brexit is anything but done

Most people think Brexit has gone badly, a UK survey finds, and Johnson has left behind a mess of problems for a new PM
The mantra right up to the grisly end was that he had got Brexit “done”.

Boris Johnson’s apparent double miracle was to break the parliamentary impasse that tormented his predecessor Theresa May when trying to pass her withdrawal agreement and then to successfully negotiate a trade deal with the EU in the following 10 months.

“This deal means a new stability and a new certainty in what has sometimes been a fractious and difficult relationship,” Johnson had said on Christmas Eve 2020 as the ink was drying on the new trade agreement.

Johnson certainly achieved a political feat in uniting his party after removing May from office and then forming an unlikely electoral alliance in the wider country – despite misleading the Queen, in the opinion of a Scottish court, as he sought to threaten recalcitrant MPs with a no-deal exit back in the dark days of 2019.

But recent polling suggests support for Brexit in the UK has collapsed – and the outgoing prime minister’s critics might confidently argue today that Johnson leaves a mess of issues behind rather than the “certainty and stability” that he claimed to have secured 18 months ago.

For all of the talk in 2019 of having struck a great deal, the government has in recent weeks threatened to unilaterally rip up a hard won and crucial agreement over the post-Brexit arrangements for Northern Ireland if the EU does not agree to a fundamental overhaul – despite the Conservative manifesto on which Johnson formed his government committing to no renegotiations.

The problem Johnson has found is that the withdrawal agreement has – as the government’s own impact assessment had said it would at the time, along with everyone else who understood the deal – drawn a regulatory border down the Irish Sea, making it more expensive to import from Britain to Northern Ireland.

May, after all, had rejected the approach taken by Johnson largely on constitutional grounds, saying to the House of Commons that no British prime minister could consider drawing borders between the four nations of the UK. The Democratic Unionist party agreed then with that position, as it does today. It is why it is refusing to allow power-sharing institutions to function in Northern Ireland.

Meanwhile, the trade deal has left Britain’s fishing communities screaming betrayal, unhappy with their paltry gains and facing expensive barriers to export what they have caught. The arrangements are simultaneously a cause of constant friction with the French government, at a time when cooperation on security between the two big beasts of European defence arguably could not be more important.

There has been a “steep decline” in the number of trading relationships Britain has with the EU as small businesses have become bogged down in the new red tape, according to a study by the London School of Economics. The Office for Budget Responsibility, the government spending watchdog, said earlier this year that Brexit “may have been a factor” in the UK lagging behind all other G7 economies in its post-pandemic recovery.

But most worrying of all for those who are protective of Johnson’s Brexit legacy is the changing face of public opinion. The latest YouGov poll has found that every region of the UK now believes Brexit was an error, with 55% of those questioned believing that Brexit has gone badly compared with 33% who say it has gone well.

Few in Westminster, beyond the Liberal Democrats, are suggesting that the UK is poised to rejoin the EU. But the very manner in which Brexit was “done” appears to have left it brittle, the polls suggest. Britain’s relationship with the 27 EU member states remains a stubbornly open question. For those who believe that Britain’s destiny remains as free-wheeling country outside the EU’s single market and customs union, there can be little confidence that anything on that front has been settled.

The payoff for this autonomy from the EU’s rules and regulations was to be a welter of trade deals around the world that offered greater access for British goods in emerging markets, along with a bonfire of regulations in the City of London that would make it more competitive.

But such has been the lack of progress on such aims that Jacob Rees-Mogg, the former Commons leader, felt forced during Johnson’s prolonged fight to stay in Downing Street to warn Tory MPs thinking of voting no confidence that Brexit might yet be thwarted. Perhaps more significantly, the lack of a Brexit dividend since 23 June 2016 has led others sympathetic to Brexit to reconsider whether the deals struck really are optimal. Tory MEP Dan Hannan mused recently that retaining membership of the single market may have been a better option.

Those who worked alongside Johnson in government, and in opposition to him at the negotiating table, point to the cause of this mess of issues being not only the substance of what was negotiated but that it was done with a misplaced boosterism.

Georg Riekeles, diplomatic adviser to the EU’s chief negotiator, Michel Barnier, during the withdrawal agreement and trade negotiations, said Johnson never appeared on top of the details but his decision to disavow the arrangements for Northern Ireland so soon after signing the agreement them astonished even the hardest-nosed officials in Brussels.

“He certainly pushed the boundaries of what one could expect a British prime minister to do very, very far,” Riekeles said. “He negotiated, signed an international agreement and had the House of Commons ratify it one day, only to walk back on it the next.”

Riekeles added: “If the objective was to satisfy an important part of the Conservative party and to tick boxes in terms of Brexit rhetoric, then of course they got that. But not if the aim was to have the best possible relations with the EU and properly get Brexit done – get it done and start a constructive relationship where one works together in a neighbourly way, to address common and global problems. Instead, relations are very complicated, and the cost of that is bigger for the UK than the EU.”

In his book, Chief of Staff: Notes from Downing Street, the former Tory MP Gavin Barwell, who led May’s office during her tortuous parallel negotiations with the EU and the mutinous cabinet, noted that Johnson was the least willing to compromise of all the Brexiters and refused to acknowledge the difficult choices that had to be made over Northern Ireland’s special circumstances, describing the problem as the “tail wagging the dog”.

Barwell told the Guardian that Johnson had won over MPs for his solution to Northern Ireland due to “brazenness and the desperation of people in parliament to find a way out of the deadlock” but that he would be “surprised” if the type of relationship Johnson designed with the EU would last.

“From a Brexiter point of view, the thing that should worry them is that this deal has not settled the argument in this country about what sort of relationship with Europe we want,” Barwell said. “If you are a Brexiter, you should be trying do something that a sufficient proportion of the population accepted so that there was no question of reopening the question. I would be surprised if we rejoined in the medium term but I would be equally surprised if a future government didn’t negotiate a closer deal.”