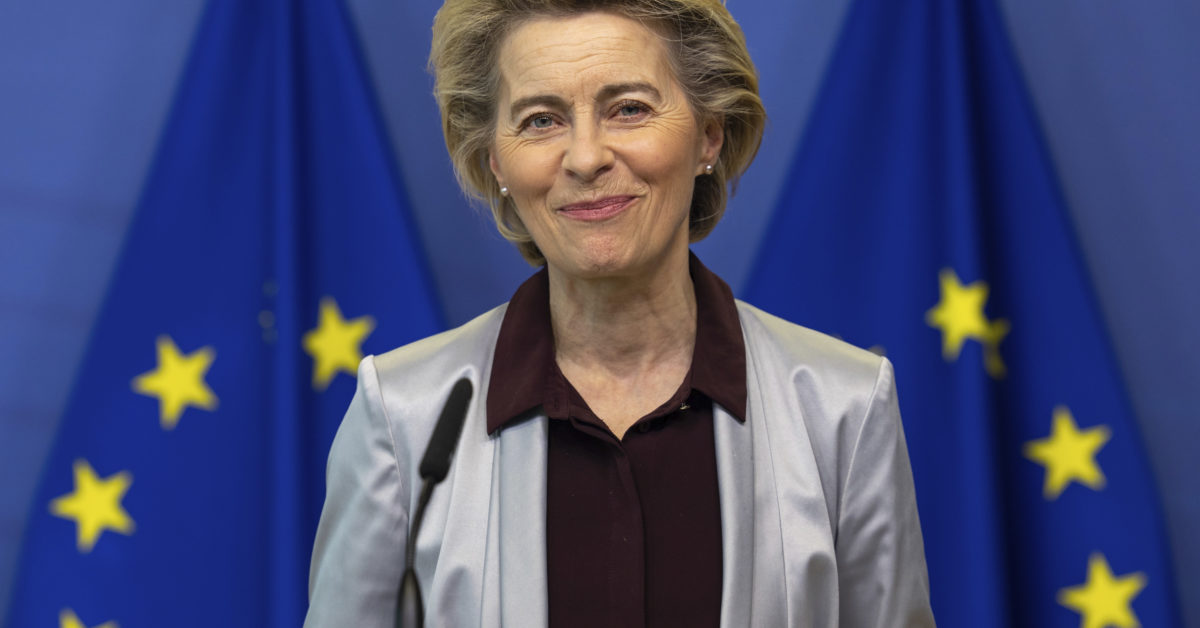 This document was found rolled up in a trash bin near Schuman roundabout. None of its contents could be verified.

PREPARED IN ACCORDANCE WITH THE TREATY ON THE NON-FUNCTIONING OF THE EUROPEAN UNION.

It is so wonderful to be back with you here in Strasbourg, the true seat of Par-lee-ament, where France’s aspirations as a global power and its local economic development policy meld together in perfect Alsatian harmony.

I know I normally give this speech in three languages, but let’s face it my French is vraiment crap. And with a German federal election just 11 days away I’d rather not say anything that can be understood, let alone misunderstood, back home.

Honorable members: When my idol, the dear chancellor, Angela Merkel, said “Wir schaffen das” — “we can do this” — she faced a storm of doubt.

And the same was true when I insisted that the EU could vaccinate 70 percent of its citizens by the end of summer, or maybe it was by June — with one dose, or maybe with two. No matter where I moved the target, they said it could not be done. They said our program was slow and badly run. That we could not keep up with countries like Israel because we don’t have a military mindset.

Haha. Never underestimate a bureaucratic mindset. We still have a lot of work to do with the vaccine skeptics, but those who doubted the European Commission’s vaccine strategy can kiss my … AstraZeneca, BioNTech, Pfizer and Moderna contracts. We. Did. It.

As of today, 71 percent of EU citizens and residents — more than 259 million people — have been fully vaccinated with two doses.

And those arrogant Anglo-Americans? The ones who initially refused to export any doses, who wanted to give up patented technology and get nothing in return. Well well. Global Britain is at just 66 percent, and the U.S. at 54.5 percent. Even Canada, which has relied mostly on vaccine imports from Europe, is ahead of them at more than 69 percent.

[Pause for applause and cheers.]

Of course, this pandemic is not over. We still have to be very careful about variants. We may need booster shots. But when it comes to coronavirus vaccination, Europe is leading the world.

Of course, our promises to help poorer countries have not gone as well. But we have not forgotten, especially our neighbors in Africa. Thanks to our recent court settlement with AstraZeneca, EU member states will soon have hundreds of millions of doses no one in Europe wants, so we will give them to our friends, or in the case of Poland, sell them at a fair mark-up to Australia.

And not only did we get a majority of our citizens vaccinated, but we rescued summer holidays by rolling out the EU Green Travel Certificate. There were a few bumps, like Joe Biden breaking his promise to reopen America’s borders. But let’s admit it, nobody wanted to go there anyway, and now that Italy, Greece and Spain collected a bunch of tourism revenue, we’ve recommended re-banning non-essential Americans, which of course means most of them. Member states might be ignoring the recommendation but that’s not the point. We got the headline. Nobody is paying attention to the details.

Meanwhile, Europe’s economy is also bouncing back. Our historic rescue-and-recovery fund is revved up and running.

Last week, the Commission disbursed €237 million in pre-financing to Latvia, part of the unprecedented EU response to emerge stronger from the COVID-19 crisis, foster the green and digital transitions and strengthen the cohesion in our societies.

I’d love to stand here and talk for an hour about recovery grants, but like I said there’s a German federal election in 11 days. Did I mention the rescue-and-recovery fund is a one-off? Not a precedent for anything. Not a Hamiltonian moment, more like a Hamiltonian macchiato. Gone in a blink.

Turning to the Green Deal, think of the EU like an early retiree ready to run a marathon: We’re Fit for 55! Woo-hoo!

In July, we rolled out the Fit for 55 package of proposals to reduce net greenhouse gas emissions by at least 55 percent by 2030 compared to 1990 levels. Achieving these emissions reductions will make Europe the world’s first climate-neutral continent by 2050 and help make the European Green Deal a reality.

This package includes the EU Emissions Trading System, the Renewable Energy Directive to set an increased target to produce 40 percent of energy from renewable sources, a new Carbon Border Adjustment Mechanism, and a ton of other good stuff.

But we need our Green Deal to be faster, greener and dealier. And we need Poland to shut up, but that’s true for many reasons. I’ll talk more about rule-of-law in a minute.

Electricity prices are soaring and we need to make sure citizens don’t blame the Green Deal. And when it comes to economic disruptions, don’t forget we have a Just Transition Fund to buy off the whiners. Remember, if you can’t persuade people on merit, disburse cohesion funds. It’s the EU way of life.

Dear Honorable and ‘Ridiculous’ Members, How to make Europe greener and more digital are the twin challenges for our generation, and our success in meeting them will define our future.

We stand now on the cusp of Europe’s Digital Decade, and I am counting on you in Parliament to help make our digital legislative priorities a reality. The Digital Services Act needs your vote — electronic votes, analog votes, we’ll take them all. And while we’re at it, can someone please geolocate the Geopolitical Commission? I lost it during the pandemic, or Borrell might have left it in Moscow. But no worries: the French presidency of the Council of the EU starts in January, and we will return to the world stage, blissfully ignoring America’s strategic pivot to Asia.

And don’t forget, another part of the digital strategy is to find ways to tax the hell of those U.S. behemoths, especially Facebook because they are a tool of Russian propaganda, and Apple because they overcharge for their devices in Europe. Why should an iPhone 12 in Madrid cost the same as an iPhone 12 Pro Max in Miami? Unfair! Vice President Vestager is working on all of this, and with a little help from Dublin (which still owes us for that whole Northern Ireland protocol mess), I think we’ll get our fair share.

Of course, after the Afghanistan debacle, we can’t go too easy on Biden. He thought we were so glad to be done with Trump that we’d do anything he asked, go along with any crazy plan he came up with. And he was right. We should have raised a fuss. We should have asked to see a withdrawal plan, even one written on the back of a Mar-a-Lago napkin.

In terms of transatlantic relations, if the U.S. won’t back down, we need to hold firm on tariffs — kick the overtaxed bourbon bottle down the road, and hold out for real concessions on steel and aluminum.

Meanwhile, the Afghanistan mess just shows how we really need to move forward with a new compact on asylum and migration. To use a phrase that Chancellor Merkel, the wunderbar Wonderwoman herself, seems to have forgotten: Alternativlos! There is no alternative. It must be done.

We can pay off Pakistan and all those other stans for a bit. But long term, that’s no solution. Look at Turkey. How many billions and Erdogan still wouldn’t give me a chair?

There’s only so long Europe can lay on the sofa, so to speak. Or put up with this nonsense from Lukashenko. We need an asylum and migration plan. And if Viktor Orbán can’t even be gracious with the Pope, we know what we have to do.

The recovery money for Poland and Hungary is already on hold over the rule-of-law nonsense. The gloves are off. We’ll keep squeezing until Orbán cries “Uncle Putin.”

Meanwhile, as the EU’s great matriarch Simone Veil once said: “Europe shouldn’t be a citadel under siege. We must know how to export our products, but also know how to spread our influence at least just as much.”

So-called Global Britain is learning what happens to countries that cross us. Let the empty supermarket shelves be a warning. Let the lack of sausage strike fear in every Euroskeptic heart.

Honorable members, thank you for listening. And I especially want to thank Manfred Weber, Frans Timmermans and everyone else who has sacrificed their own career so I could further my own. As Europeans, we will continue to spread our influence, along with our vaccine doses. We will defend our way of life, including our right to having no real security or military strategy, and continue relying on unreliable Americans.

We will give our citizens booster shots, boost our economy, greenify, digitalize, regulate, and bureaucratize. Last year I urged us to stop talking down the EU. This year, maybe we can just stop talking.