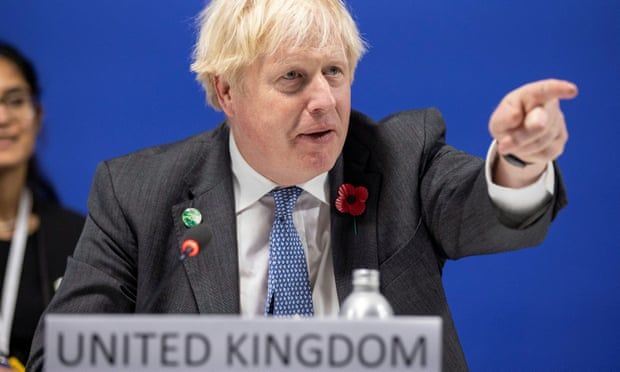 Boris Johnson will travel home from Cop26 by private plane

PM to fly from Glasgow to London in plane run partly on sustainable fuel rather than taking 4.5-hour train
Boris Johnson is flying back from the Cop26 climate conference on a private plane rather than the train after spending two days warning world leaders to reduce their emissions.

The prime minister left himself open to accusations of hypocrisy after urging other countries to do everything possible to pledge lower emissions and warning that they would be judged by their children if they fail to act.

Johnson flew into Cop26 in Glasgow from Rome after attending the G20 of world leaders. But instead of getting the train, which takes about four and a half hours, he has decided to take a short internal flight from Glasgow to London.

Earlier, he told a roundtable of leaders of developing nations: “When it comes to tackling climate change, words without action, without deeds are absolutely pointless.”

The prime minister is one of hundreds of world leaders and businesspeople who have chartered planes to attend the conference aimed at limiting global temperature rises to less than 1.5C. Jeff Bezos, the boss of Amazon, was one of those who flew in to Scotland for the conference.

Johnson’s spokesperson defended the move, saying the plane ran partly on “sustainable aviation fuel” and emitted about half the emissions other aircraft. The plane will still cause far more emissions than a trip by train.

“It’s important the PM is able to move around the country. We have obviously faced significant time constraints,” Johnson’s official spokesperson said.

The plane – an Airbus A321 – appears to have been leased from a company called Titan Airways, while the prime minister’s usual Voyager is being serviced. His spokesperson said: “The plane is one of the most carbon-efficient planes of its size in the world. It produces 50% less CO2 emissions than, for example, the larger Voyager plane.”