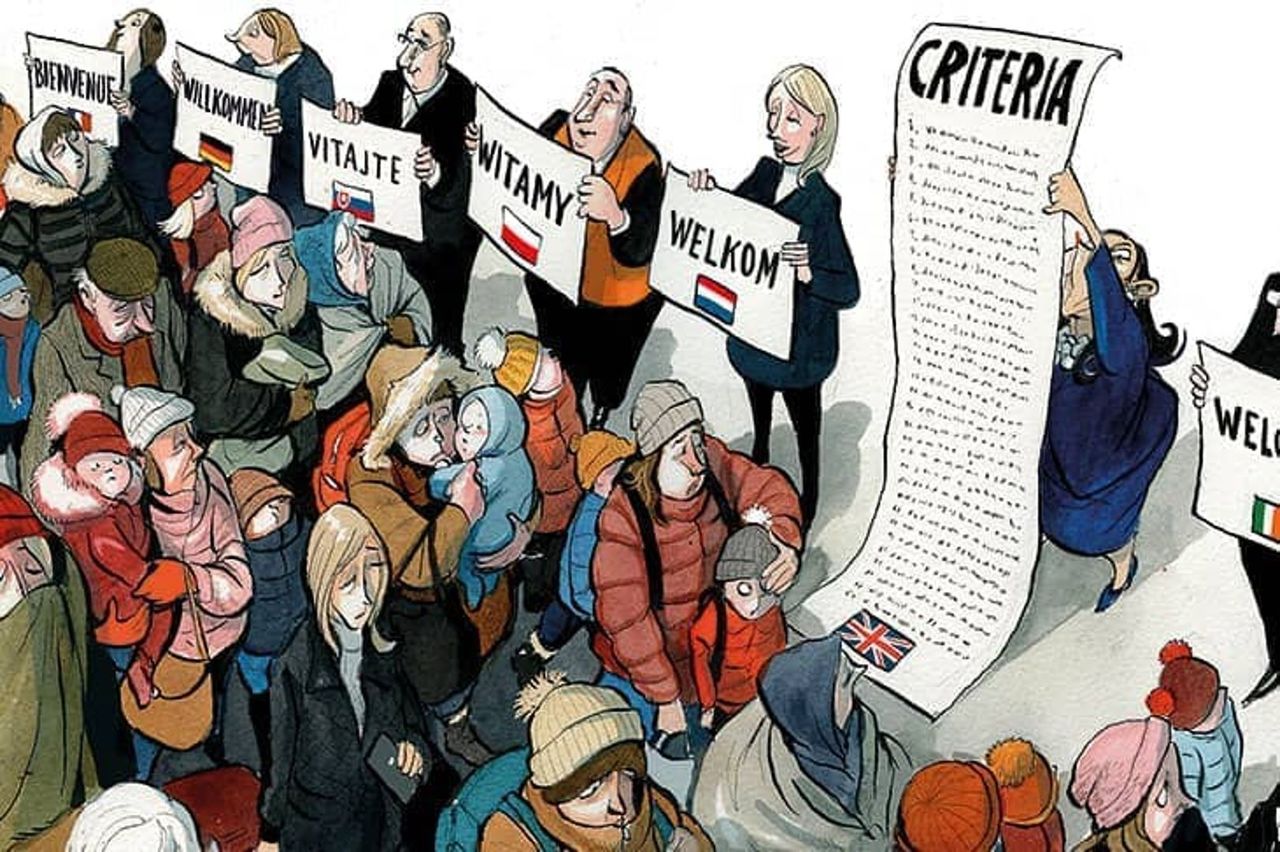 e British government is not turning anybody around,’ Priti Patel told her French counterpart last weekend. ‘Ukrainian refugees are welcome in the UK.’ She doubled down on her claims in the House of Commons on Monday: ‘It is wrong to say that we are just turning people back; we are absolutely not.’
You don’t have to spend long in Calais to disprove the Home Secretary’s claims. As we checked into our hotel at 1.30 a.m. on Tuesday, we saw seven Ukrainian refugees resting on the couches in the lobby.

There was nothing eye-catching about the group, apart from their obvious weariness and the pile of Ukrainian passports and documents on the table in front of them. We met Mohamed and his wife, Tanya, who left Kiev with their daughter when Russia began its invasion of Ukraine. Mohamed studied at Brighton University in 2014 and the family speak English, so they wanted to go to Britain.

They travelled through Bratislava, then Vienna, Munich and Paris, but here the journey stopped. French border officials ‘told us you’re not allowed to enter the train because you have to get a visa to reach London’. They were turned around then. They travelled to Calais, hoping they’d have better luck at the ferry port, but so far they continue to be turned back.

They were running out of cash and were in the hotel lobby because they couldn’t afford rooms. ‘Our bank card doesn’t work,’ Mohamed said. ‘Most Ukrainian bank cards don’t work here.’ It’s a common theme among the refugees we spoke to: the lifestyles they enjoyed at home a mere four weeks ago are not affordable here. ‘I had to find a hotel,’ said one young Ukrainian woman, ‘and the cheapest one was €60. And for Ukraine, that’s like a huge amount of money. You can live on that for maybe two weeks.’

During one of the biggest refugee crises in living memory, with more than two million displaced Ukrainians, most of Europe has opened its arms. Germany has so far taken in 64,000 refugees. Crowds of Germans gathered at Berlin’s main station to offer accommodation.

The country’s interior ministry estimates that there have been 350,000 offers to take refugees from businesses, charities and individuals. In the 18th arrondissement of Paris, a help-point called ‘Accueil Ukraine’ offers accommodation and support to refugees. Emmanuel Macron has promised to ‘take care of those who seek protection on our soil’. Can Britain say the same?

Ukrainians trying to head to our shores hit a wall of bureaucracy. They need a biometric test and proof that they have a family connection to the UK. Even if they fit the criteria, the paperwork is confusing, and the process to file it costly. They are told to upload the application online and if that doesn’t work, some have had to post it to the UK and been told to pay £75 for processing.

Refugees in Calais who are eligible for a visa and have filled in their paperwork are still being sent back to Paris for visa appointments that can be more than a week away. Patel said on Monday that a refugee processing centre would be set up in Calais. Instead, Liz Truss, the Foreign Secretary, announced a pop-up visa centre in Lille, 75 miles away.

EU countries voted unanimously last week to open their borders so anyone with a Ukrainian passport can live and work there, no questions asked, for up to three years. Ukrainians travelling between countries can show documentation and ride on trains free of charge.

Poland, which refused to take in refugees in Europe’s 2015 migrant crisis, has offered unconditional asylum to Ukrainians, and is paying households who shelter them. Andrzej Duda, Poland’s President, has welcomed a million people so far and says his country will take more. Slovakia has taken 150,000 and tiny Moldova 83,000, which amounts to roughly 3 per cent of its population. Meanwhile, the UK’s asylum scheme looks designed to keep most Ukrainians out.

By 7 March, nearly 9,000 Ukrainians had submitted applications to come to the UK. Two days later, just 760 had been approved. Inside Whitehall, there is bafflement and frustration over the contrast between Britain’s military and humanitarian support for Ukraine. ‘We were the first to arm the Ukrainians, and rightly proud of it,’ says one government minister. ‘But wars mean refugees. So where was our plan for those?’

Another minister says the Ukrainians are sorely needed in a Britain which has a record 1.3 million job vacancies. ‘It’s not just that they need us. We need them. So what’s the problem?’ The disconnect is confusing refugees too. One young Ukrainian plays us videos of Patel’s welcoming words and laughs. ‘That’s wrong, though,’ he says.

He introduces us to his wife, Roksolana, who was already forced to uproot her life in Ukraine once, fleeing the Donbas in 2014 when Russian-backed separatists tried to take control of the region. Her family settled in Kiev, where she was studying to become an interpreter, but they are now on the move again.

‘This is really hard because you have your own life, you have your apartment – you have plans,’ she says. ‘One day you wake up to bombs and you think: what am I going to do now? Everything seems crushed. Right now, I’m kind of pointless.’

Without family in Britain, Roksolana is stumped. ‘I hope that they will accept people,’ she says of the UK government. ‘I want to go to university. Then I would work, work, work.’ They are staying at a youth hostel near the port of Calais, which is now a refugee safe-haven. It’s slapdash, but effective. One of the hostel workers, Lio, has become a crisis worker overnight. ‘We were underbooked, and then slightly taken aback when Ukrainian refugees started to show up,’ he tells us. ‘But I’m just glad we are able to help.’

Refugees are offered three hot meals a day, games and books for children and free SIM cards. A message board at the reception offers English translations for necessities such as clothing, shoes and shampoo – along with the now infamous notice that Ukrainians can’t get to the UK without a visa, and that visas won’t be issued in Calais.

Free visa advice is offered in the back room of the ground floor – not by British officials, but by Care4Calais, a charity which works with refugees in the city. Its founder Clare Moseley says that the administration requirements are too much for most people to cope with. ‘I found it difficult to do,’ she says, ‘and I’m English and I can read it all. It’s fairly complex. It’s a two-stage process: as well as filling in forms online, you then have to go for an in-person meeting to get the visa.’

Moseley helps people arrange visa appointments, but places are limited. ‘As of yesterday, none could get a [visa] appointment,’ she says. ‘Only one person got an appointment yesterday and it was for 17 March.’

The Raminishvili family managed to overcome this hurdle: we met them after they had jumped through various hoops and got the paperwork ‘sorted’. But the process was ‘chaotic’, said the husband, Misha, and his family’s visa appointment in Paris isn’t for another week.

The Home Office is notorious in Whitehall for being the most bureaucratic of all government departments. Even when asylum seekers make it to the UK, they can’t work until they are given official refugee status. To declare that refugees are free to work and support themselves – as Poland has done with Ukrainians – would make a far more liberal, cheaper asylum scheme possible. But it terrifies certain civil servants. The institution is wedded to the idea that refugees should instead stay on welfare until they are accepted.

The Home Office’s losing battle with bureaucracy has now kept 48,500 refugees waiting more than six months for their cases to be processed, a figure that has risen by about a third in a year.

Thousands of Afghans are staying in hotels and B&Bs, which the government estimates cost £200 a night. There are around 80,000 refugees in total waiting to have their claims heard. As of Monday, 17,000 Ukrainians had already started applying for refugee status.

A wave of Ukrain-ian applicants is crashing into a British sys-tem already struggling to cope. The idea of a bureaucracy-free offer – matching Ukrainians up with families willing to host them, as Germany is doing – is something the Home Office says it’s looking at. But no details have been forthcoming.
#Priti Patel
Add Comment