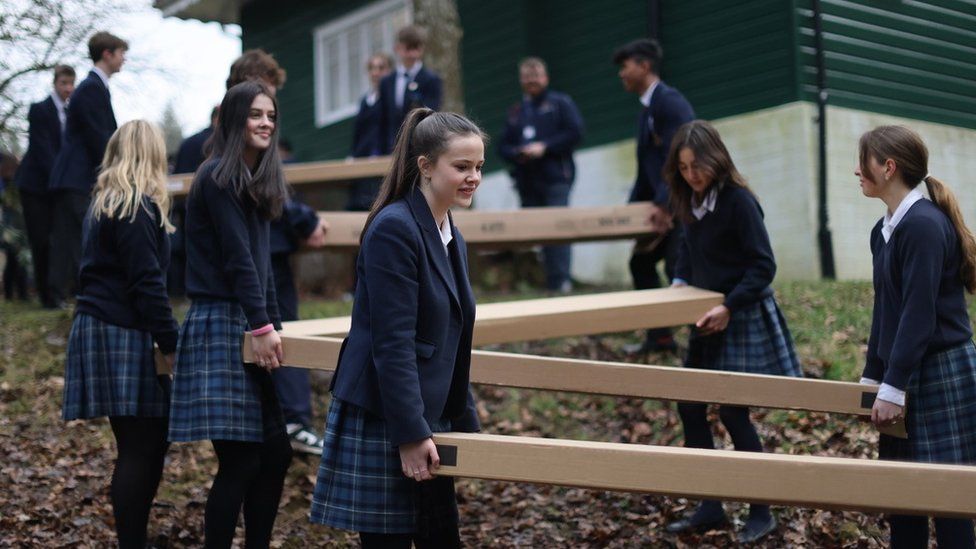 And the Scots-supported charity Dnipro kids is trying to break through red tape to bring orphans to waiting families in Scotland.

Whether it's selling bread and cakes, raising cash or finding homes, people want to do more.

On Friday, a truckload of flatpack bunk beds made its way from Strathallan School near Perth to Grodzisk Mazowiecki, just outside Warsaw in Poland.

Pupils at the independent school had organised a collection of beds and bedding after an appeal directly from Poland.

Businessman Iain Gordon, who owns a medical research company, has colleagues in Ukraine and children at the school. He asked them to help.

"We were given very specific requests for aid that is required in Poland for refugees coming across the border," he said. "We asked the school if they could provide us with a facility to receive and store this stuff and asked a removals company if they could lend us a lorry and it all came together within a week."

"We have about 100 beds, 200 sets of bedding, towels, duvets pillows, etc. These are going to a reception centre for refugees in Grodzisk Mazowiecki just outside Warsaw. What they needed was beds and bunk beds."

Iain's employees - mostly doctors - were until recently working on a new Covid vaccine.

He said: "Two weeks ago their world fell in. They are adamant they are not going to leave the country. They want to stay there and support their fellow citizens."

"Our country manager there, Andre, told me things last week were very difficult up and down to the bomb shelter eight or 10 times a day sending the night in subways and car parks. This morning they said there were bombardments 20-30k from Kyiv. We can't say they are safe but they are well." 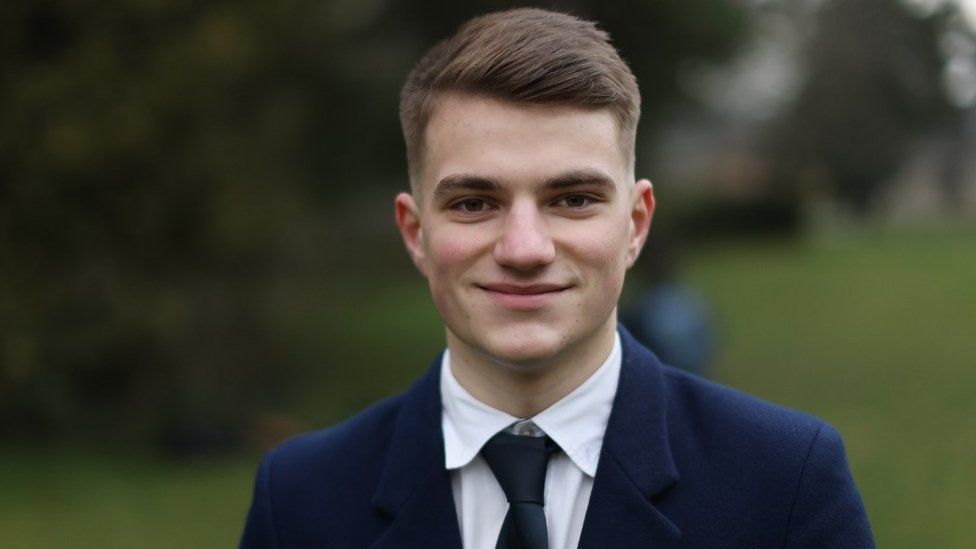 Ukrainian Strathallan pupil Dmytro Borysov was in Lviv when the invasion began.

He was home for the half-term holiday and his parents immediately got him back to Scotland. At 18, he just missed the order that men aged 18-60 would have to remain in the country and fight.

"I went home for half term in February," he told BBC Scotland. "Everything was okay. It was a usual day and I went to sleep then woke up at 05:00 because there was an alarm around the city. Everyone was panicked and didn't know what to do.

"My parents said we have to leave the country because myself and my sister study in the UK.

"Everyone was trying to leave Ukraine. There were big queues in customs and it was very different than it was before.

"After a few days our president said boys and men from 18 to 60 are not allowed to leave the country because they have to go to the military."

Dmytro is happy his friends are supporting him. 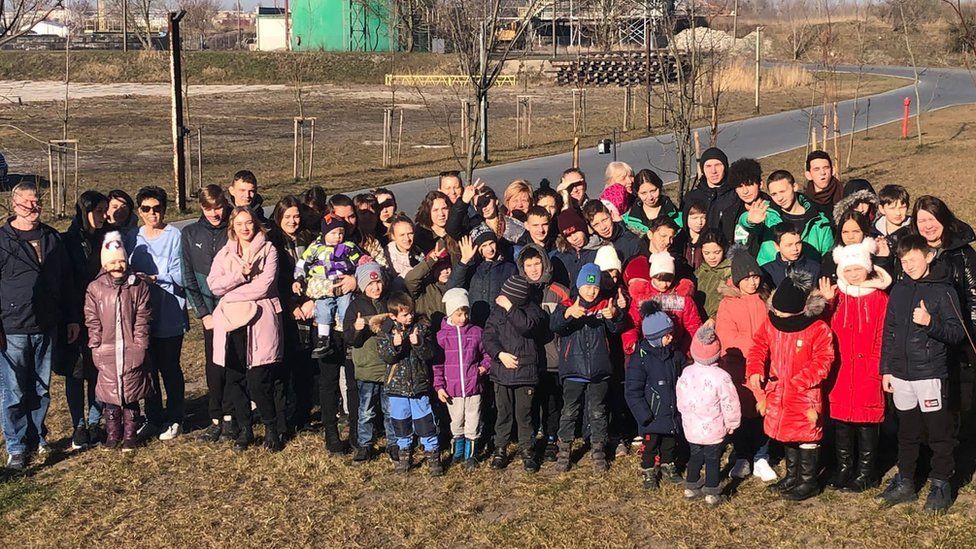 The Edinburgh charity Dnipro Kids, set up by Hibs FC fans after a Uefa Cup match in 2005, has now managed to get 48 Ukrainian orphans to safety across the Polish border but is now struggling with red tape to bring them back to Scotland to be looked after.

The children, aged between six and 17, came from orphanages around Dnipro in southern Ukraine. Their coach crossed the border on Thursday evening after taking six hours to get through border control.

Initially, 29 were evacuated, then that number rose to 48 on Sunday. Some of the orphans travelled by train while others remain in the city.

The charity's chairman Steven Carr, who has been travelling with the children, said homes and care had been arranged for them in Scotland.

"The only thing that needs to happen for us to be able to bring the kids back is for the UK government to say that it's ok to bring them in," he told the BBC.

"We've got the support network in place, we've got the funding in place, the children know us and trust us, and that's it, that's all we're asking. Let us in." 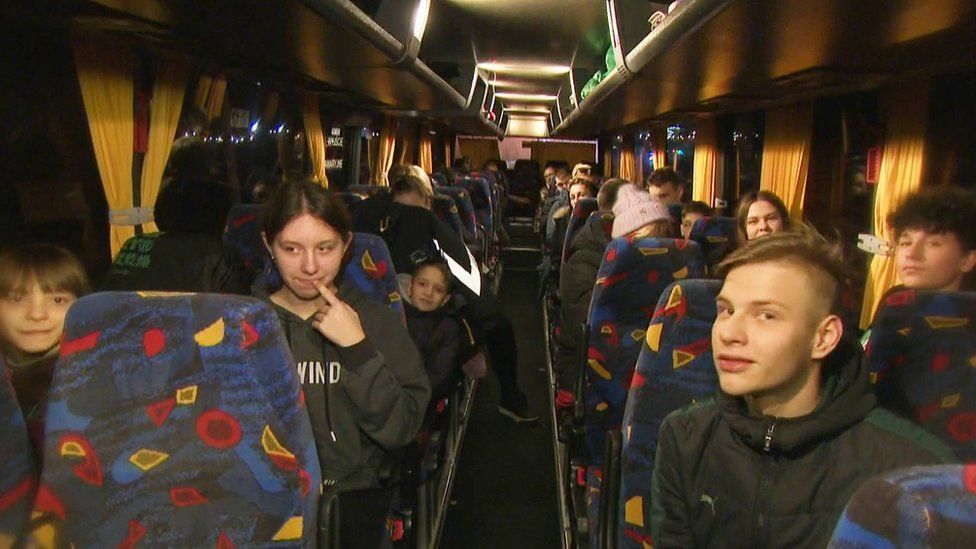 The UK government is due to set out details of a scheme which will allow people to welcome Ukrainians fleeing the conflict into their homes next week as well as allowing companies and communities to sponsor refugees.

Mr Carr said it needed to set up the sponsorship scheme quickly and make it easy.

"The longer it takes the more pain and suffering you're putting the kids through. We've got them away from the initial worry of being stuck in Dnipro but they're still in limbo," he said.

Fundraising, big and small also continues across the country by those with links to the country and those who are watching the horrors of invasion on TV.

Since a bake sale attracted hundreds of supporters a week ago, his total was doubled when a donor matched the funds raised.