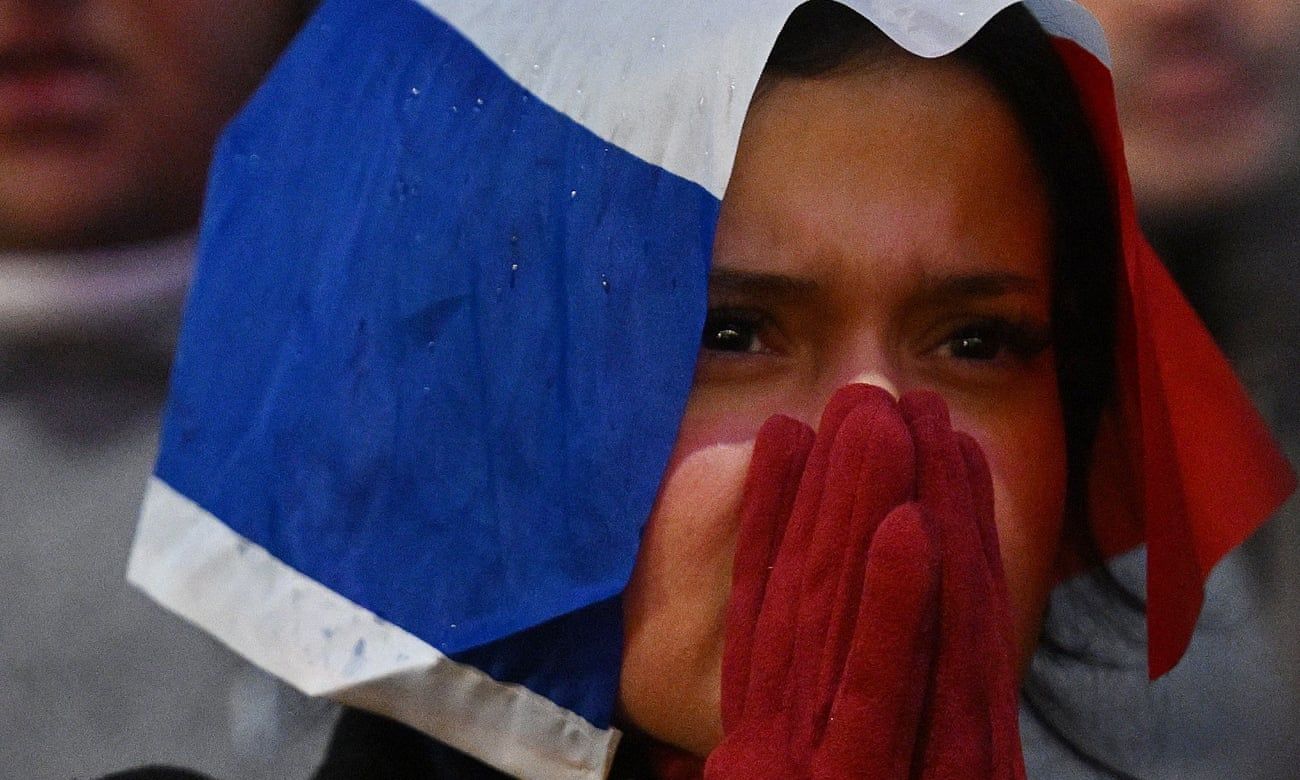 It was a rollercoaster. By the end they were standing on the tables outside, roars of “allez les Bleus” and “liberté, égalité, Mbappé” rising hoarsely into the freezing early evening air, hugging each other fiercely, cheering on their heroes.

It was standing room only in Le Napoléon and Le Mondial cafes, facing each other across the Rue du Faubourg-Saint-Denis in Paris’s 10th arrondissement – both rammed to the rafters inside with flag-waving, face-painted, red-white-and-blue bewigged fans.

For 80 long minutes, the mood had swung from anguish to despair to fury. “They’re outplaying us in every area,” said Aurélien, 28, hopping up and down on a chair in Le Napoléon. “They’re just faster, neater. They want it more. It’s all in the aggression.”

France, all in Le Mondial agreed, were playing rubbish. “We’re not in it, not in it at all,” said Marion Dupré, queuing at the bar. “Dreadful. Incredibly disappointing.”

Outside, with 20 minutes to go, Salma and Leila were even ready to go. “It’s way too cold,” said Salma, 19. “And anyway, the match is over. We’ll get sandwiches at the Monoprix and find somewhere a bit quieter for a drink. What a let down.” Just down the street, Le Chateau d’Eau – determinedly not showing the football – began filling up

Then, two-nil down to Argentina 10 minutes before the end of normal time, came a first France penalty, and an immense roar as Kylian Mbappé squeaked it home from the spot. Followed, barely a minute later, by an even louder howl as Bondy’s idol swept home a stinging second.

“Unbelievable!” cried Sylvie, 30, screeching to make herself heard and holding her head in disbelief at the back of the aptly named Mondial. “They’ve woken up. They’ve suddenly started playing. Look at them! Anything’s possible now. It’s going to happen. You wait! Allez les Bleus!”

Extra time, and slowly, surely, a badly rattled Argentina began to pull back. It was Messi, inevitably, who put them ahead. “Noooon,” moaned Philippe Moreau in Le Napoléon, a rare grey-headed figure among an overwhelmingly young crowd. “Mind you, you can’t begrudge him. He is Messi.” 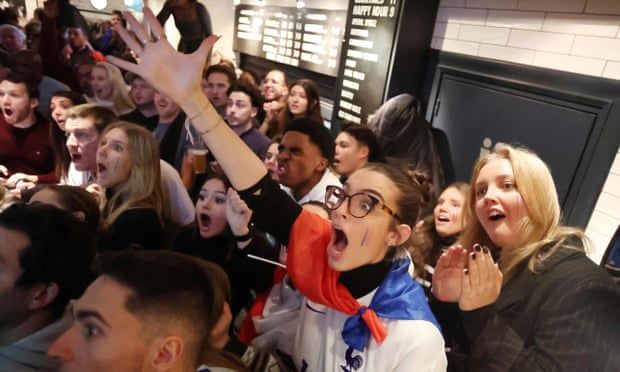 Fans react as they watch the final in a bar in Paris.
Then, truly unbelievably, the equaliser: another Mbappé penalty, and hope sprang once more. “They can do it, they’re going to do it,” whispered Magalie Potet in Le Napoléon, trying to convince herself, half-weeping, the tricolour flag painted on her cheeks smudged from emotion.

And then, a crazy end-to end scramble at the end of extra time, spectacular saves from both keepers, and penalties.

“We’ll crack,” said Mickael, 26, back in Le Mondial, sporting a red, white and blue beanie and his father’s No 10 Zidane shirt, bought after France’s 1998 win against Brazil. “There’s no way this’ll happen. Too many young players. They’ll freeze.”

It was prophetic. Mbappé scored the first, to roars loud enough to make even the few uninterested drinkers in Le Chateau d’Eau look up. Messi made it one all. “Now wait,” said Mickael, not daring to look. “It’s all going to go to shit.”

And it did. There weren’t many tears; there was even acceptance. “Penalties are always a lottery,” said Karim, 40. “We can’t really complain, can we? We fought, came so close, by the end we’d given really everything we had. It so nearly happened. We can be proud, I think. That has to have been one of the best ever finals.”

Nearly 3,000 police and gendarmes were out on patrol in the capital, mainly around the Champs-Elysées, along with nearly 12,000 more across the country, as authorities prepared for they knew not what after France’s second successive World Cup final.

The avenue the French call “the most beautiful in the world” was sealed off to traffic at both ends and its shopfronts mostly boarded up, in anticipation of tens of thousands of supporters either celebrating or drowning their sorrows.

An estimated 600,000 people descended on the Champs-Elysées after France’s victory over Croatia in July 2018, and before this year’s final police predicted that even if France lost, up to 300,000 could be expected.

From the atmosphere in Le Napoleon and Le Mondial, it didn’t feel like it would be that many.