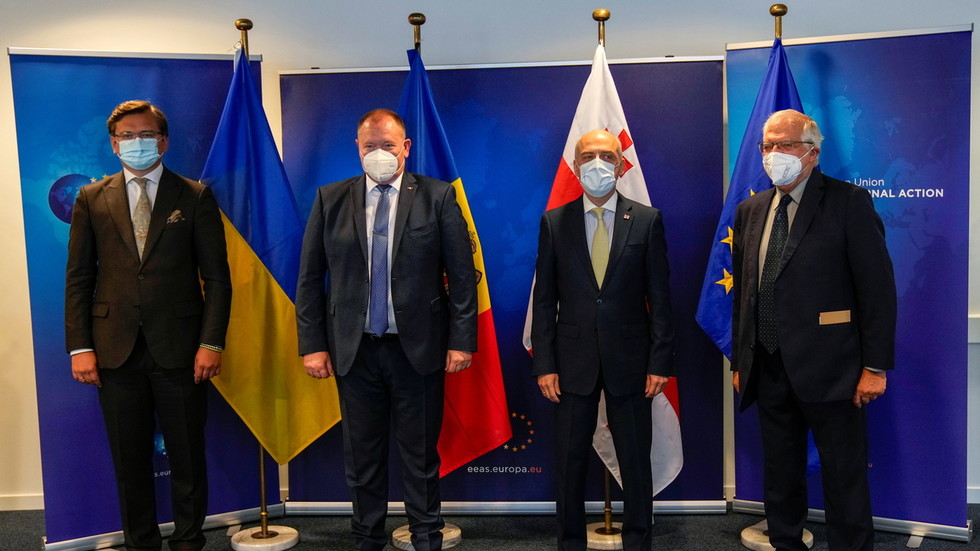 Why the EU no longer wants to expand east

The rise of Euroscepticism has led some Western governments to question the wisdom of enlarging the European Union. Having witnessed Brexit, they will now find it much easier to turn down Eastern European states.
The prime ministers of Ukraine, Moldova and Georgia have been in Brussels meeting with top European Union officials. Their ultimate goal is to set out a roadmap for accession into the EU, but they will have to be happy with some warm words from the Eurocrats and promises of further cooperation.

Back in July, the Georgian president, Salome Zourabichvili, Ukraine’s president, Volodymyr Zelensky, and Maia Sandu of Moldova signed a declaration calling for the EU to acknowledge that their countries would one day become full EU members. However, in today’s climate, this is more of an ambitious hope for the “Associated Trio,” rather than a real expectation.

This is because the days when the EU would look to the east and see potential member states are over. Not because of a lack of ambition on the part of Brussels, as it is always keen to acquire new states, but because many of the existing members see no tangible benefits in expanding the bloc at this moment in time. Enlargement has seemingly been put on hold.

There are a number of reasons why the EU has been blocked from expanding, and most are the result of domestic concerns within member states. Some governments in Western Europe in particular have been spooked by Brexit, and they think if it happened in the UK, then why not here?

They understand that one of the main drivers of the UK leaving the EU was the huge influx of people arriving from Eastern Europe. Indeed, I would suggest that if the EU had not expanded eastwards in 2004, then the UK would still be part of the bloc.

Western European governments believe that if the EU was to expand further east again and allow in the likes of Ukraine, which has a population of 44 million, economic pull factors would ensure significant migration west.

Added to this is the fact that Euroscepticism is already on the rise in much of the EU. Over the past 20 years, support for Eurosceptic parties has doubled and politicians like Matteo Salvini in Italy and Marine Le Pen in France are now part of the mainstream.

Another influx of migrants from Eastern Europe would only serve to give a boost to Eurosceptics in the polls. This is why the French, in particular, blocked a swift accession of the Western Balkan countries, which has now left them in a state of limbo.

There would also be the sizeable financial cost of bringing in yet more poorer countries from the east. As this burden would have to be spread across the bloc, some of the countries that have been net recipients of EU funds, such as Poland, would have to become net contributors.

This financial burden would be greater as the UK, which was the EU’s second-largest contributor, has left the bloc, resulting in a £65 billion ($86 billion) gaping hole in the budget that has had to be plugged. Indeed, nothing turns the public against Brussels more than when they see their hard-earned cash being spent in other countries. I have witnessed this firsthand.

The EU is already attempting to put out so many fires that it cannot afford to light even more. By allowing countries that fall into Russia’s sphere of influence to join the club, it may as well be throwing a vat of oil on a bonfire.

This scenario is especially challenging at the moment, as the EU is encountering an energy crisis and is largely dependent on Russia for much of its gas. Encroaching into its sphere right now would be akin to biting off the hand that feeds you.

And then there are specific issues within the states that want to join. In recent times, Georgia has been racked by political infighting, anti-LGBT protests and the jettisoning of democratic reforms. Moreover, Brussels is concerned that Moldova is too dependent on Russia, especially following the recent five-year extension of its deal with Gazprom for energy supply. Ukraine has been a political tinderbox for many years now.

Interestingly, however, the accession of Ukraine, Georgia and Moldova into the EU club does have the support of the new German government. Nevertheless, as I have written previously, the federalist ambitions of the incoming chancellor, Olaf Scholz, are out of step with both the political and economic realities facing Brussels, and the attitudes of other member states.

I’m sure the prime ministers of Ukraine, Moldova, and Georgia received a warm welcome in Brussels and heard some words of encouragement over croissants and coffee, but there is no concrete agreement or clear path to accession. Unfortunately for them, this ambition has been smashed on the rocks of the economic and domestic political concerns of Western Europe.
Add Comment