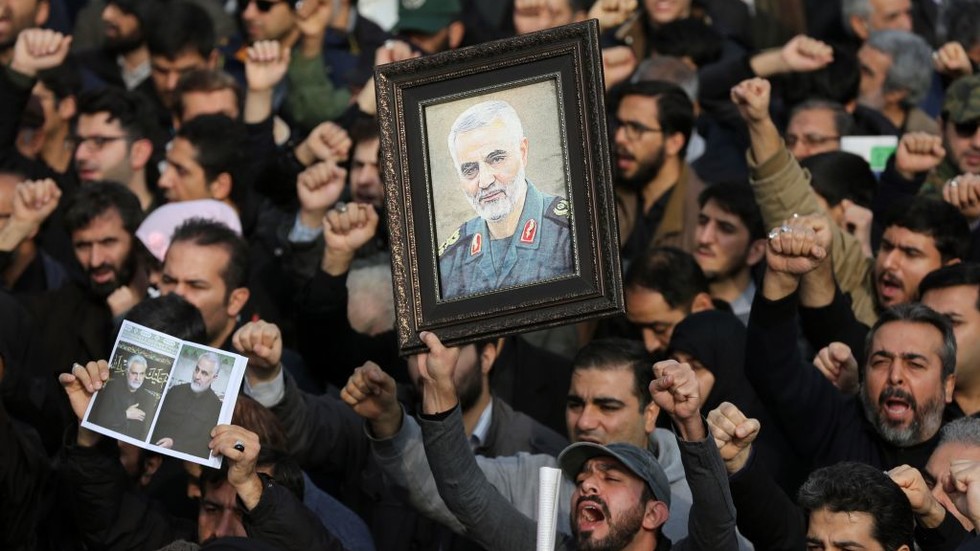 Why Iran will never forget US killing of Soleimani

Two years ago, the US ordered the assassination of an Iranian icon, Qassem Soleimani. Iran has since been calling for justice to be administered by the international community on the Americans responsible for this crime.
If justice is denied, Iran will have no choice but to enact its own brand of revenge.

This past November, the United States marked the 58th anniversary of the assassination of President John F. Kennedy. The fact that most of the people who were alive on that day have long since passed did not stop the nation from remembering that horrible moment in Dallas, Texas, when an assassin fired the bullets that took an American icon’s life.

America, and Americans, have dealt with the consequences of this tragedy in several ways, from commemorating the life of JFK, to promoting conspiracy theories about the circumstances surrounding his death, and everything in between. There is, however, a consensus that Lee Harvey Oswald was the man who pulled the trigger of the rifle that took Kennedy’s life. And, given Oswald’s subsequent death at the hands of Jack Ruby, the element of revenge was removed from the range of emotions the American people would experience in the aftermath of Kennedy’s murder.

Imagine, for a moment, if, on that horrible day in November 1963, an American leader who encompassed the Camelot-like inspiration of Kennedy but was also a military leader with the stature of Dwight Eisenhower and the heroic accomplishments of Audie Murphy had been gunned down, not by a lone assassin, but the military of a foreign power, which then gloated about its “accomplishment” while belittling this composite all-American hero as little more than a “terrorist.” The need for revenge would be all-consuming, and the American people would not rest until the perpetrators had been brought to justice.

This is not some hypothetical speculation – the case of Osama bin Laden, hunted down and killed nearly a decade after he masterminded the 9/11 terror attacks on the US, serves as the most notable example of the elephant-like memory of Americans when it comes to punishing those who have committed an egregious wrong against their nation. Woe be to the politician who dared to try to inject a modicum of reason into any discussion about the need to exact retribution – their career would have been effectively terminated on the spot.

On January 3, 2020, the United States assassinated – murdered – Qassem Soleimani, an Iranian icon who was the Persian equivalent of John F. Kennedy, Dwight D. Eisenhower, and Audie Murphy rolled up into a singular figure whose prominence and reputation among Iranians was second to none. The murder of Soleimani impacted Iran in the same punch-in-the-gut manner as had the assassination of JFK, or the terrorist attacks of 9/11, did the American people.

Some 300,000 Americans lined the streets of Washington, DC to view JFK’s casket procession during his state funeral on November 25, 1963.

Millions of Iranians lined the streets of major Iranian cities and highways to view the casket carrying Soleimani’s body to his final resting place.

On Monday, Iran marked the second anniversary of the murder of Soleimani, the commander of the country’s elite Quds Force. Millions of people filled the streets of Iranian cities to mark the passing of a national hero.

In Tehran, President Ebrahim Raisi described Soleimani as “not just an individual, but a doctrine, and that he will not be destroyed with an assassination and missiles – doctrines remain and survive.” In a separate meeting with Soleimani’s family, Iran’s Supreme Leader Ayatollah Ali Khamenei declared that Soleimani “was and is the most nationalist and religious person in Iran and the world of Islam.”

In the US, meanwhile, most Americans woke up on the morning of January 3 ignorant of not only the mourning that was transpiring thousands of miles away, but also of the burning desire for revenge that existed in the hearts of virtually every Iranian citizen. If Soleimani was mentioned at all by the American media, it was as an afterthought, the dismissal of a man denigrated as little more than a terrorist.

The absolute inability of Americans to empathize with non-Americans is one of the fundamental failures of American society. If the American people could project their emotions about JFK’s murder or the 9/11 attacks onto the circumstances surrounding the assassination of Qassem Soleimani, then perhaps they wouldn’t be so cavalier about the potential consequences of actions taken in their name. The fact that Americans cannot identify with the suffering of the Iranian nation regarding the death of a man they view as a national hero is a defining failure of the quality of the American people collectively as human beings. as human beings.

From this failure will come consequences. Americans scoff at Iran’s furtive attempts to bring former President Donald Trump, ex-Secretary of State Mike Pompeo, and dozens of other identified persons to justice over the murder of Soleimani, especially when such justice would be administered by an Islamic court. The hypocrisy of this position is mind-bending – the American people had no similar rejection of justice when, in October 2013, US commandos seized Abu Anas al-Libi, an Al Qaeda member accused of helping plot the 1998 bombings of US embassies in Kenya and Tanzania. Abu Anas al-Libi pleaded not guilty to the charges and was scheduled to begin trial on January 12, 2015. Instead, al-Libi died in an American hospital, ostensibly from complications relating to Hepatitis C.

Iran knows all too well that its efforts to gain international support for the arrest of Trump, Pompeo and others are doomed to fail. The purpose behind the Iranian posture isn’t justice, but rather to be seen as exhausting every legitimate means to bring those it holds responsible for Soleimani’s death to justice. Once all avenues for satisfaction under international law have been exhausted, Iran may think it possesses the moral authority to pursue the matter using its own inherent arrest authority and prosecutorial tools.

It can’t be ruled out that Iran could even detain individuals overseas and render them for trial in Iran (as the arrest and subsequent execution of Abdolmalek Rigi in 2010 suggests), or else hunt them down and assassinate them (as was done with Dr. Cyrus Elahi, a monarchist who was gunned down in Paris in October 1990).

“If Trump and Pompeo are not tried in a fair court for the criminal act of assassinating General Soleimani, Muslims will take our martyr’s revenge,” Raisi said on Monday.

Unlike the American people, the Iranian nation has not, and will never, forget the murder of Qassem Soleimani at the hands of the American military. His death will serve as the driving force behind Iran’s eventual program of revenge-based justice. One may not be able to predict the time, location, or outcome of this effort, but one thing is for certain ​​– if justice is denied, there will be revenge.
#Donald Trump
Add Comment