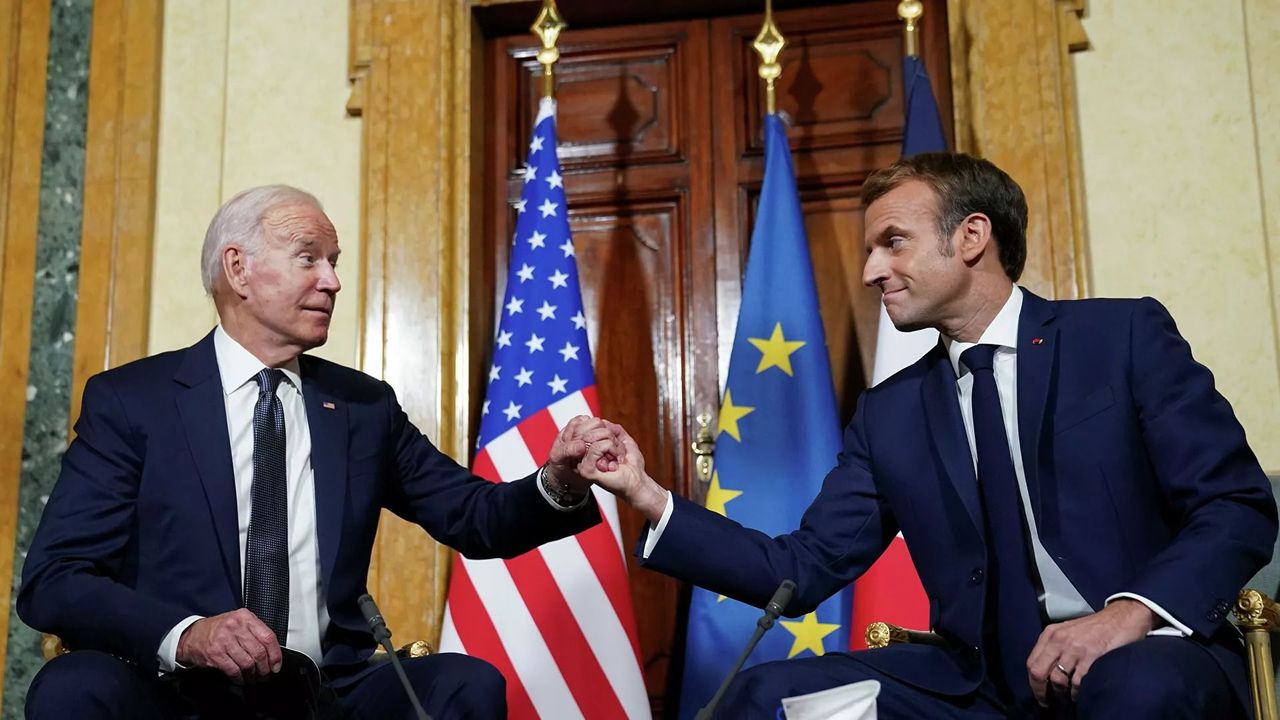 'What We Did Was Clumsy': Biden Calls France an 'Extremely Valued Partner' in Wake of AUKUS Fallout

Last month, relations between France and the United States slipped to lows not seen in decades after Washington, London, and Canberra secretly signed a security pact which robbed France's defence sector of a submarine contract with Australia worth tens of billions of dollars.

President Joe Biden has admitted that the US acted in a "clumsy" manner regarding the AUKUS security pact, and assured Paris that Washington does not have an older or more loyal ally than France.

"Sitting alongside French President Emmanuel Macron at the French Embassy to the Vatican on the sidelines of the G20 summit in Rome on Friday in their first face-to-face meeting since the AUKUS dust-up began last month, Biden claimed that he was "under the impression that France had been informed long before that the [French-Australian sub] deal would not go through."

"I, honest to God, did not know you had not been," he insisted.

"To use an English phrase, what we did was clumsy, not done with a lot of grace," Biden said.

The US president stressed that "there is no place in the world where we can't work together," and insisted that "we have no older, more loyal and decent ally than France."

Macron called the rendezvous with Biden "an important meeting" following two telephone conversations they'd held in September and October, and stressed the need to "look ahead to the future" after agreeing to a "common effort, a political response and strengthened cooperation between the US and France."

Macron praised Biden over what he said were "concrete decisions" taken by Washington to improve confidence between the two NATO allies.

Ahead of the meeting, a French security official told media that Macron would expect a new commitment from the US to support French anti-terrorism operations in the Sahel – including greater intelligence and military cooperation.

Along with AUKUS and the Sahel, the two leaders were also expected to discuss cooperation against China in the Indo-Pacific, as well as Iran's peaceful nuclear programme and the crisis in Afghanistan.

Stitching Up the 'Stab in the Back'

France lost out on a deisel-electric submarine deal with Australia worth over $65 billion last month after Canberra, London, and Washington announced the creation of a new security pact known as AUKUS, under which Australia would receive US and British nuclear reactor technology to build the subs in its own shipyards.

Paris deemed the agreement, which was negotiated in total secrecy from AUKUS's allies, as a "stab in the back," and accused Canberra of falsely assuring France that the sub deal was still in place even after it became clear that the security pact would lead the country to cancel the order. France briefly pulled its ambassadors to the US and Australia over the perceived betrayal, with some opposition lawmakers urging tough steps – up to and including potential withdrawal from NATO, over the slight.

"For 20 years we have been following the United States to the letter," Bardella said, adding that it was time for the country to regain "the means of its freedom."

Macron and Le Pen are polling neck and neck ahead of the April vote, with a Harris-Interactive poll carried out in the week ending 13 October showing Macron leading by less than three percentage points.