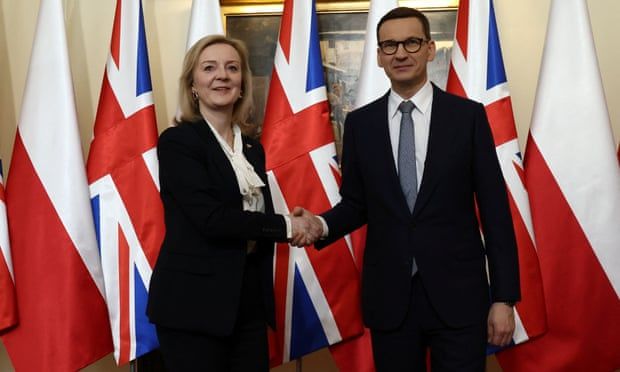 Britain’s foreign secretary revealed on the second day of her visit to Warsaw that 60% of Moscow’s reserves were now unavailable to it, slightly higher than recent calculations. It follows US Treasury moves on Monday to make it harder for Russia to pay back its dollar-denominated debt.

But Truss, speaking alongside the Polish foreign minister, Zbigniew Rau, said the west urgently needed to go further and faster to damage the Russian economy, saying: “The only way to end this war is for Vladimir Putin to lose in Ukraine.”

She warned: “Although Russian troops have been defeated in their initial assault on Kyiv, there has been no change in their intent and ambition. We are seeing Putin’s forces set their sights on the east and south of Ukraine, with the same reckless disregard for civilian lives and their nationhood.”

Poland is probably the UK’s closest European ally in the war with Ukraine, and on her two-day visit Truss met the Polish prime minister, Mateusz Morawiecki. On Monday he criticised the French president, Emmanuel Macron, for talking to Putin, saying no one talked to Hitler. Truss has increasingly been setting a high bar for the lifting of the west’s sanctions on Russia, a move that is welcomed in Poland.

In the wake of alleged Russian war crimes, the UK has joined Poland and Ukraine in pressing the G7 – including Germany, France and Italy – to set out specific timetables to end their dependency on oil, gas and coal.

It is expected that the EU will be willing to take measures on coal and oil but not gas, since the infrastructure is not in place to end the dependency on Russian gas imports.

Truss claimed coordinated sanctions were “pushing the Russian economy back into the Soviet era” and were having a crippling impact on those who feed and fund Putin’s war machine.

But speaking before a meeting of EU, G7 and Nato foreign ministers in Brussels this week, she said the west needed to go further by taking four additional steps. These were banning Russian ships from ports, cracking down on Russian banks, “[going] after industries that are filling Putin’s war machine, like gold”, and agreeing a clear timetable to eliminate imports of Russian gas and oil.

The US and UK have already barred all transactions with the Russian central bank’s gold reserves, valued at roughly $130bn.

The claim by Truss that 60% of Russia’s central bank reserves were beyond its reach shows the success and limits of the west’s sanctions regime. At one level the west can claim progress. For instance, Russia’s central bank announced last week that its foreign currency and gold reserves had fallen since February and the start of the war by $38.8bn, to $604.4bn as of 25 March.

On this basis it would take less than a year for Russia to run out of the remaining foreign currency reserves that it can access. But in practice Russia is using funds generated through European purchases of Russian gas funnelled through Gazprombank to generate foreign currency with which to defend the ruble.

At the outset of the crisis, in a surprisingly bold move, Japan, the UK, France, Germany and the US all froze Russian assets, making it impossible for Russia to sell the reserves for rubles. But Russia had sought to protect itself by pursuing a policy of building its foreign currency reserves and gold, resulting in it lifting its reserves from $368bn seven years ago to more than $630bn.

Figures from 2021 show about 13% of its assets were stored with China, part of a conscious move by Russia to pull its reserves out of the west.

Until this week the US had been allowing Russia to use its frozen funds to make coupon payments on dollar-denominated debt on a case-by-case basis. But on Monday for the first time it prevented Russia from paying for a $552.4m principal payment on a maturing bond, saying it could not access its frozen funds.

The Bank of Russia has responded to the west’s sanctions by doubling interest rates to 20% and by demanding unfriendly countries pay for their gas supplies in rubles.
Add Comment