Russian President Vladimir Putin has warned Finland's leader that abandoning neutrality would be a "mistake" but Finland's minister for European affairs has told Sky News the country is "prepared for all kinds of nasty measures".

The West has declared a "total hybrid war" against Russia and it is hard to predict how long it will last, Moscow's foreign minister has said.

Sergei Lavrov said the consequences of the war in Ukraine will be felt around the world.

But speaking about sanctions on Russia, he warned: "Western politicians should understand their efforts to isolate our country are in vain."

And he went on to accuse Western nations of stealing other countries' assets and losing their reputation as reliable partners.

"In the future, the world economy will be de-Americanised," he said in a speech on the 80th day of Russia's invasion of Ukraine.

"We did everything to avoid a direct clash - but now that the challenge has been thrown down, we of course accept it," Mr Lavrov continued.

"We are no strangers to sanctions: they were almost always there in one form or another."

His comments come after a meeting of G7 foreign ministers took place earlier on Saturday, which saw the nations sign a statement saying they will continue to put economic pressure on Russia.

The group, which is made up of the UK, USA, Canada, Japan, Germany, France and Italy, also backed giving more aid and arms to Ukraine and expediting its efforts to "end reliance on Russian energy supplies".

"We reaffirm our determination to further increase economic and political pressure on Russia, continuing to act in unity," a joint statement read.

• President Zelenskyy says talks with Russia on getting wounded defenders out of the Azovstal plant in Mariupol were "very complex"
• Russian fighter jets have taken part in Baltic Sea drills, Interfax reported
• Russia says it will take adequate precautionary measures if NATO deploys nuclear forces and infrastructure close to its border
• Ukraine is storing hundreds of dead Russian soldiers in a refrigerated train in order to send them back to their families
• American think tank believes Russia has lost the battle for Ukraine's second-largest city

Putin warns Finland it would be a 'mistake' to join NATO

Meanwhile, Russian President Vladimir Putin has warned Finland's leader that abandoning neutrality would be a "mistake" but that there are no security threats to its capital, Helsinki.

In response, President Sauli Niinisto told Mr Putin that his demands for countries to avoid joining NATO, together with the invasion of Ukraine, have changed Finland's security environment.

In a readout of a phone call between the two leaders, Finland's president said: "The conversation was direct and straight-forward and it was conducted without aggravations. Avoiding tensions was considered important."

Russia's Kremlin described the call as a "frank exchange of views" - normally a diplomatic euphemism for a difficult conversation.

Finland's NATO membership bid is expected to be followed by a similar move from Sweden.

An expansion of NATO would be a blow to Mr Putin, who undertook the war in, what he said was, a bid to thwart the alliance's easterly advance. 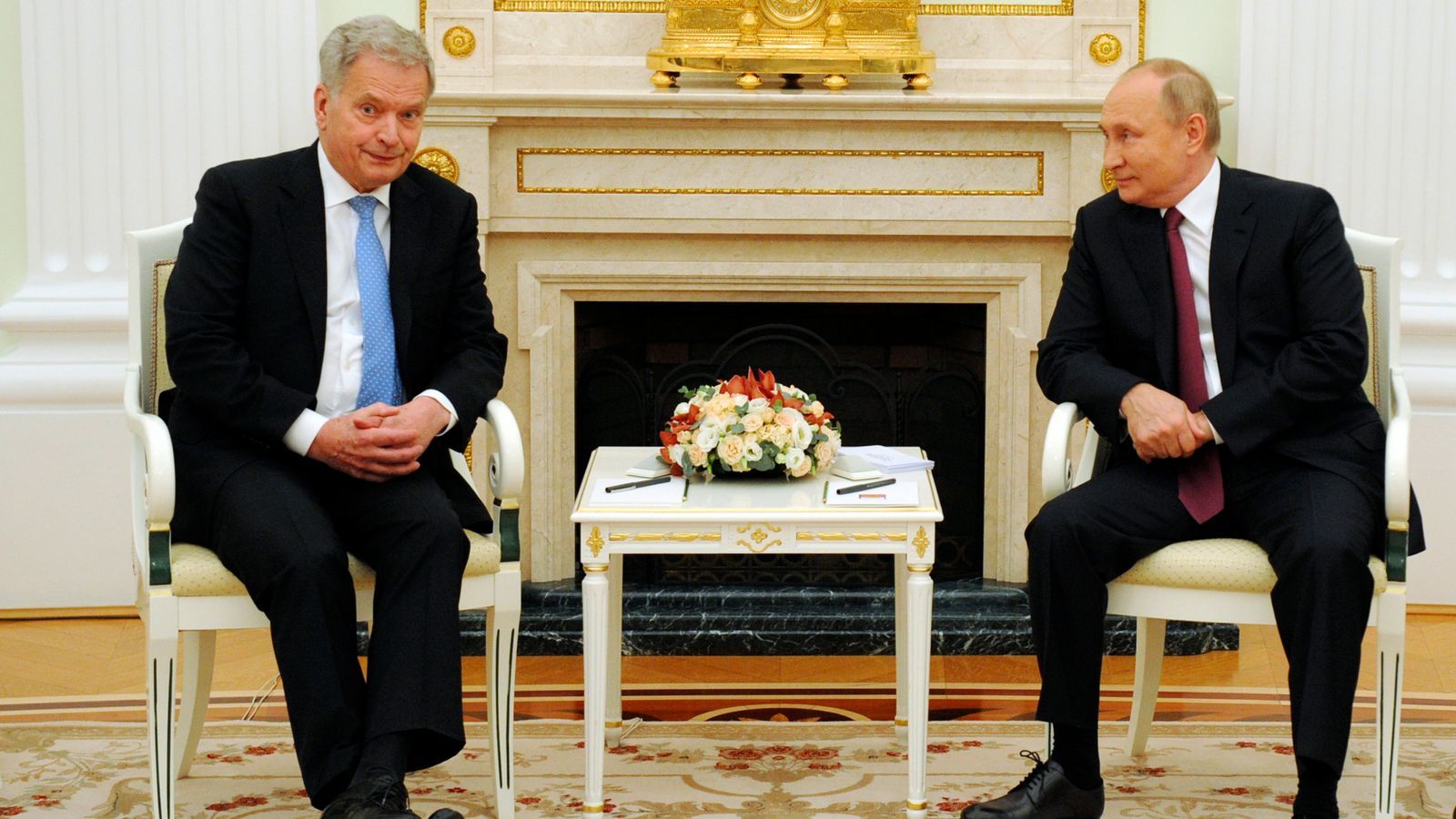 Discussing Finland's bid to join the alliance, the country's European affairs minister told Sky News it is "ready to carry out its responsibilities for the security of Europe".

Asked if Finland is playing a dangerous game by going against Mr Putin's warning, Tytti Tuppurainen replied: "Absolutely not.

"We are in a different situation since Russia started its ruthless and illegal war in Ukraine."

She explained that "it is time" for Finland to "get allies and to get more partners" but it does not "intend to provoke anyone".

"It's about security," Ms Tuppurainen said. "We have a neighbour which we have seen is able to act and wage a very ruthless war.

"We are prepared for all kinds of nasty measures against us but there is absolutely no panic and we are not afraid. We have been preparing for all kinds of actions and this is about our own decisions."

"Putin is to blame and this is one of the consequences of his game," she said.

'There is no threat'

Earlier on Saturday, the operator of Finland's national grid, Finigrid, confirmed to Sky News that electricity is no longer coming into the nation from Russia.

The cut supposedly happened because payments were unable to be processed.

Speaking to Sky News, the senior vice president of Finigrid, Reima Paivinen said: "We are not worried... Russian input totals about 10% of our consumption and the lack of input can be covered by having more national production and by increasing imports from Sweden and the Baltic countries.

"There is no threat that there will be not enough electricity," he added.

Oh ya 11 days ago
The west mainly the USA wants war with Russia. Ukraine would not sign the Minski agreement that was worked out since 2014 likely being told not to from America. The last thing a failing country does is take its people to war and if you have at least 2 working brain cells you can see the US is a failing nation
View all comments (1)Add comment