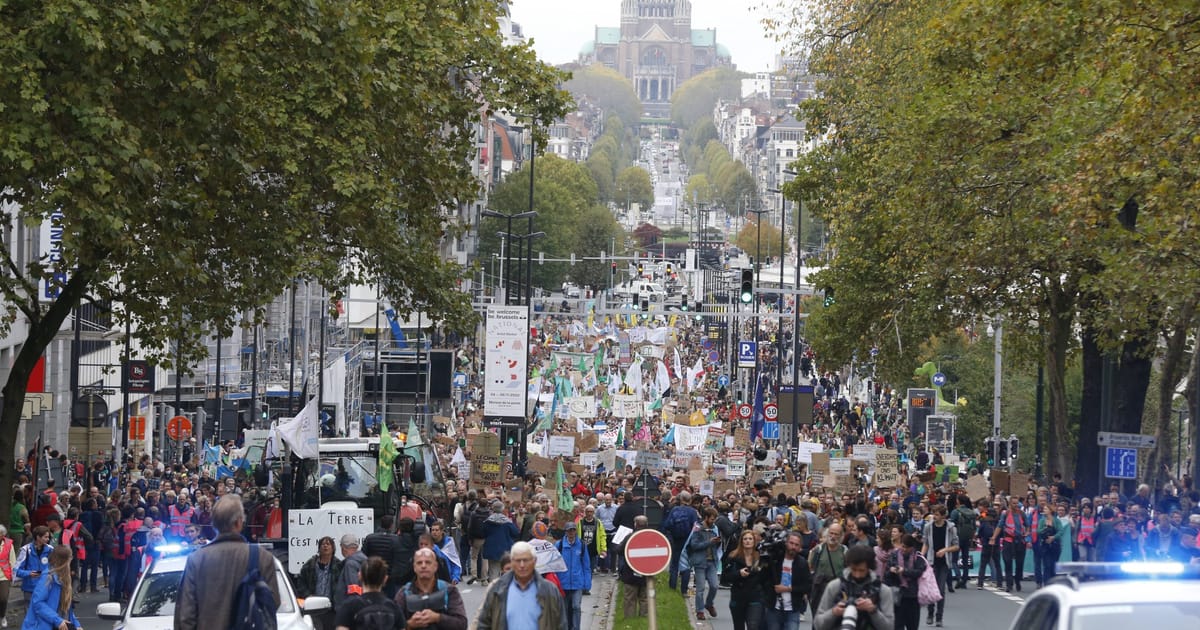 Weekend of protests in Europe, from energy to Iran

Thousands march in Brussels to demand strong measures against global warming.
Thousands of protesters gathered across Europe over the weekend to protest over energy prices and climate — and also to show solidarity with antigovernment protesters in Iran.

Germany was the epicentre of the protests, but Brussels also saw marchers on Sunday, according to local media, as thousands of people took part in a demonstration organized by the Climate Coalition, which brings together more than 90 environmental organizations, trade unions and citizen movements, to demand strong measures against global warming.

The end of the demonstration was expected at around 5 p.m. at the Parc du Cinquantenaire, near the EU institutions. According to local authorities, traffic could be affected until 8 p.m. Police said 25,000 people were taking part in the march, according to Le Soir.

“We’ve seen a big rise since 2018, and despite COVID and other emergencies, people continue to mobilize and take to the streets for more climate action,” said Rebecca Thissen, coordinator for the Climate Coalition.

On Saturday, tens of thousands of protesters gathered in six German cities to demand a fairer distribution of government funds to deal with rising energy prices and a quicker transition away from fossil fuels, according to Reuters.

Demonstrations took place in Berlin, Düsseldorf, Hannover, Stuttgart, Dresden and Frankfurt. Protesters held signs bearing slogans on a wide range of topics, sometimes seemingly contradictory, from more energy subsidies and switching off nuclear plants, to lowering inflation, according to reports. Around 24,000 people participated, according to Greenpeace, one of the organisers, as police said 1,800 gathered in the German capital.

“We want to show that we urgently need financial relief for citizens that is socially balanced,” said Andrea Kocsis, deputy chair of ver.di, one of the unions organizing the protest. “The government is doing a lot but it is distributing funds with a watering can. People with lower income need more support than the wealthy,” she added.

The German parliament on Friday approved the government’s proposal for a €200 billion fund to tackle skyrocketing energy prices. Private households could benefit from a price cap starting in March.

The €200 billion fund was controversial in Brussels as some leaders accused Germany of protectionist tendencies since not all EU member states have the same fiscal capacity of Berlin.

“We have to find a way to overcome … maybe almost protectionist tendencies,” Latvian Prime Minister Krišjānis Kariņš warned on Thursday, speaking to journalists ahead of a meeting of EU leaders. “We have to look beyond what we can do as individual member states,” he said.

On a different note, tens of thousands of people gathered in Berlin on Saturday to show solidarity with antigovernment protesters in Iran, where a movement sparked by the death of a woman in the custody of morality police has evolved into a challenge to the Islamic Republic, according to an Associated Press report.

Berlin police estimated that 37,000 people had joined the demonstration by late afternoon. Participants, joining also from outside Germany, held up Iranian flags and signs criticizing Iran’s leaders, many with the tagline “Women, Life, Freedom” in both English and German.

And similar protests against the Iran regime took place across the Atlantic in Washington and Los Angeles on Saturday.

Before the COVID pandemic there were already strong protests in Iran.

And there were also other demonstrations over the weekend — for different reasons — in Hong Kong, Santiago, Paris and Barcelona, as analysts stressed that in the age of smartphones and social networks, organizing a street protest doesn’t require the support of opposition parties or trade unions.

The energy crisis seems to have only exacerbated the trend.

According to data published last month by risk consultancy Verisk Maplecroft, more protests are yet to come. The data, covering seven years and encapsulated in its Civil Unrest Index, show that the last quarter saw more countries witness an increase in risks from civil unrest than at any time since the index was first released.

Out of 198 countries, 101 saw an increase in risk, compared with only 42 where the risk decreased.

“As the conditions for civil unrest build in a growing number of countries, the severity and frequency of protests and labor activism is set to accelerate further over the coming months,” according to the consultancy.
#Covid
Add Comment