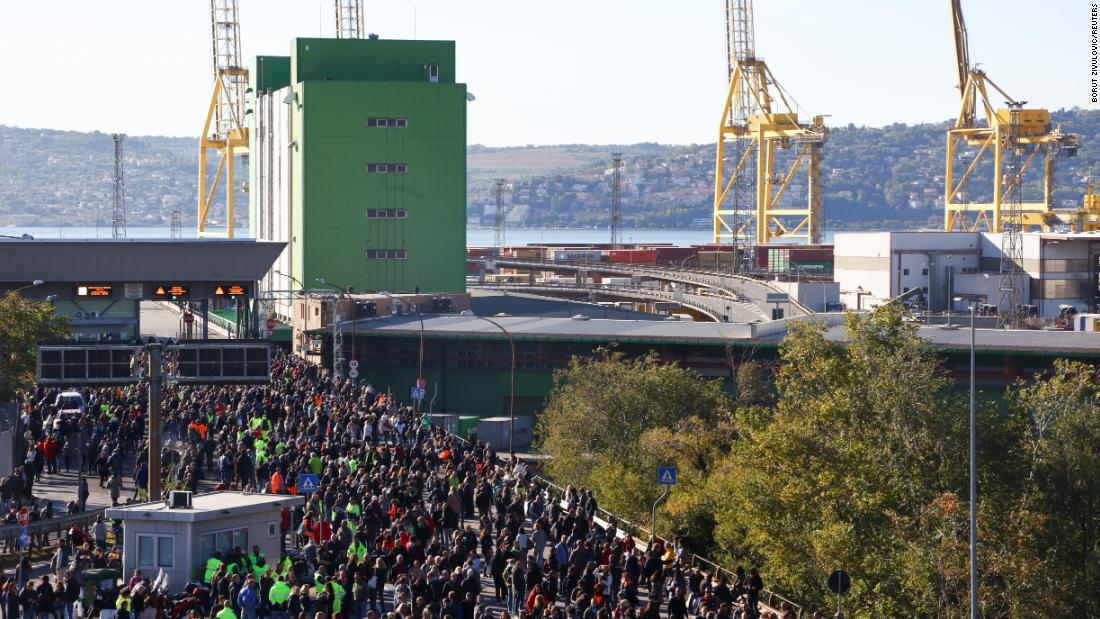 Down a narrow, winding street in central Rome, golden cobblestones shine out from the footpath in front of homes, etched with the words: "Deportata Auschwitz" ("deported to Auschwitz").

One of the stones is dedicated to Rossana Calo, who was just two years old when she, along with her mother, was transported hundreds of miles to the Nazi death camp; on arrival, she was killed in the gas chambers.

These plaques, commemorating more than 1,000 victims snatched from their homes in the Italian capital's Jewish Ghetto in October 1943, are a sobering reminder of the country's dark past.

Italy entered World War II as an ally of Adolf Hitler in 1940, but Benito Mussolini's Fascist regime had already embraced anti-Semitism. Months after he was overthrown in 1943, German authorities began to round up Jews in Rome and other major cities in the country's north.

More than 75 years after Mussolini's inglorious death at the hands of partisans, the debate about fascist ideology -- and its continuing appeal to some Italians -- has been reignited in the wake of the government's attempts to control the coronavirus pandemic.

On October 9, the headquarters of Italy's largest trade union and a hospital emergency ward in Rome were targeted during angry protests against the country's Covid-19 "Green Pass."

The Green Pass, which came into force last Friday, requires all workers -- from café staff to care workers, taxi drivers to teachers -- to show proof of vaccination, a negative test or recent recovery from infection. Italy -- once Europe's Covid-19 epicenter -- now has the continent's strongest vaccine mandate.

Members of the neo-fascist Forza Nuova were arrested in relation to the violent attacks in Rome. 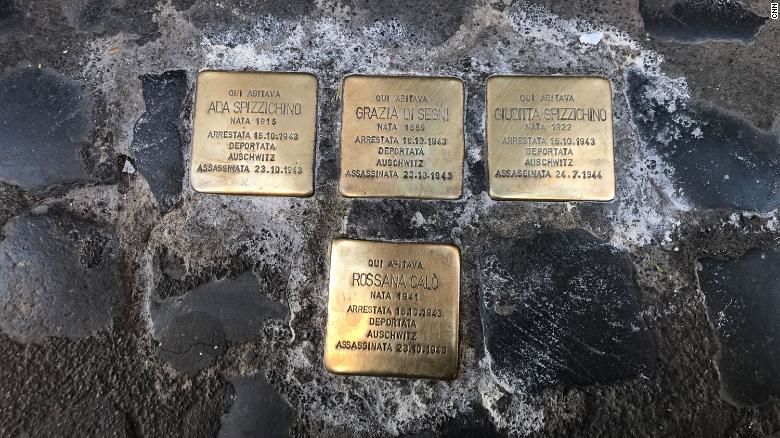 Gold cobblestones outside front doors in Rome's Jewish Ghetto commemorate people arrested and deported to Auschwitz. Two-year-old Rossana Calo was one of those.

"Fascism never went away in this country," said history professor Simon Martin, the author of several books on Italian fascism. "Italy has not confronted its past. There is no appetite for this, I think, on either side."

Martin said thousands of people still line up each year on anniversaries, such as Mussolini's birth, death and "March on Rome," to visit his tomb in Predappio, 200 miles northeast of Rome, despite the fact he ran a repressive police state, and was responsible for brutal colonial campaigns and massacres during his 20 years in power.

"[It] has a book of condolence which has to be changed on a regular basis because it fills up," he said.

A 1952 law banned the reconstitution of fascist parties in Italy, but they have reformed under alternative names, Martin told CNN during a visit to the Jewish Ghetto.

The violence of the Green Pass protests on October 9 has led to mounting calls to dissolve neo-fascist groups in the country. Organizers canceled an anti Covid-19 green pass demo in the northeastern city of Trieste planned for Friday and Saturday, and urged protesters not to attend over fears of violence.

This week, Italian lawmakers in both the upper house Senate and lower house voted in favor of a motion put forward by the country's center-left parties, which calls on Prime Minister Mario Draghi's government to dissolve Forza Nuova and all movements of neo-fascist inspiration. Draghi and his Council of Ministers will now consult legal experts before announcing a decision.

Forza Nuova's lawyer Carlo Taormina told CNN the group is currently being dismantled and has not been active as a political movement for 20 months.

In response to the violent scenes on October 9, tens of thousands of people demonstrated against fascism in Rome's San Giovanni Square at the weekend.

"I came here because it is important to send a message," Jacopo Basili, 30, told CNN at the rally organized by Italy's main trades unions. "What happened was very bad, as if we were returning to 100 years ago in Italy. Today we must say no. It is not possible." 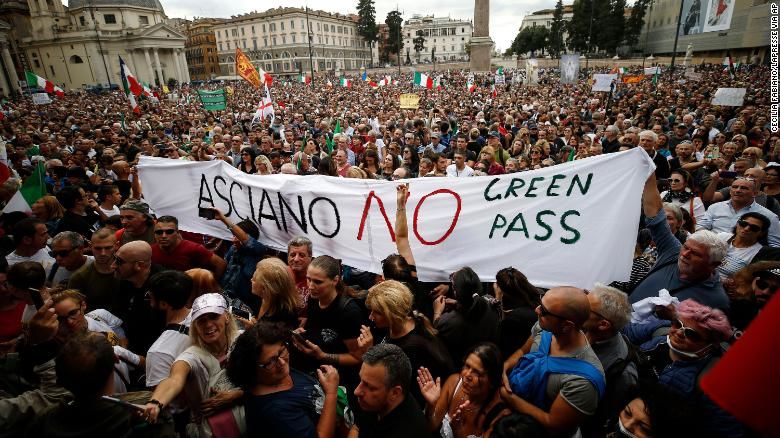 People gather in Piazza del Popolo square during a protest against the Covid-19 health pass, in Rome, Saturday, October 9, 2021.

Another demonstrator, Leone Rivara, told CNN he doesn't believe the threat of fascism in Italy today compares to the Mussolini era, but that social tensions in the country have been "aggravated by the pandemic," and that "forces that declare themselves democratic ... cross boundaries and exploit the weakness, the fragility, the anger, the delusion of the people to [upset] the democratic balance of this country."

One group accused of doing just that is the Fratelli d'Italia, or Brothers of Italy, a right-wing party that made international headlines when one of its members, Rachele Mussolini -- granddaughter of Benito -- was elected to Rome's city council for a second term earlier this month.

Rachele Mussolini won more than 8,200 votes -- the highest number tallied for any candidate -- and a huge increase on the 657 votes she received in the 2016 ballot.

"I will strive not to disappoint those who trusted me and to conquer those who don't know me ... My goal is to keep working for my city to give it back [its] lost dignity," she wrote in a Facebook post following her re-election.

CNN contacted Rachele Mussolini, via her press secretary, to ask if she finds it hard to distinguish herself from the fascist associations tied to her last name, but has not received a response.

She is not the first descendant of the Italian dictator to go into politics. Her stepsister Alessandra served as a member of parliament in Silvio Berlusconi's center-right People of Freedom alliance, and was a Member of the European Parliament.

Opinion polls suggest Fratelli d'Italia, which grew out of the neo-fascist Italian Social Movement party (MSI), is currently the most popular party in Italy.

The Fratelli d'Italia party -- along with Matteo Salvini's right-wing Lega and the centre-right Forza Italia -- recently backed radio host and lawyer Enrico Michetti in his fight to become Rome's next mayor.

On Monday, Michetti lost the run-off vote by roughly 20%. During the campaign, his office was defaced with the word "fascista."

Asked why Fratelli d'Italia is still affiliated with fascism, the party's leader Giorgia Meloni told CNN her party is not a breeding ground for such a regime.

Andrea Ungari, professor of contemporary history at Rome's LUISS university said he believes a small proportion of Italians could be defined as having fascist beliefs.

Neo-fascist groups Forza Nuova and CasaPound did not participate in Italy's most recent elections.

"It's difficult to define Fratelli d'Italia as a fascist party," Ungari said. "Of course, there are some declarations ... some harsh attitudes ... it is clearly a right-wing party but with the difference between right and extreme right."

"In Italy there is the heritage of fascism of course but sometimes it's a term utilized by the left to monopolise the political debate," Ungari warned.

Monuments linked to racism, colonialism and shameful moments in history have been removed from countries around the world in the wake of the Black Lives Matter protests.

In Italy though, architecture from the 20 years of Benito Mussolini's rule is maintained. Unlike Germany, which outlawed and eradicated Nazi symbols in the aftermath of World War II, Italy left numerous reminders of the fascist era standing.

Ostiense railway station, which was built to commemorate Hitler's visit to Rome in 1938 and boasts a mosaic themed around the Italian fascist ideology that modern Italy was the heir to ancient Rome, is still one of the city's major railway stations. 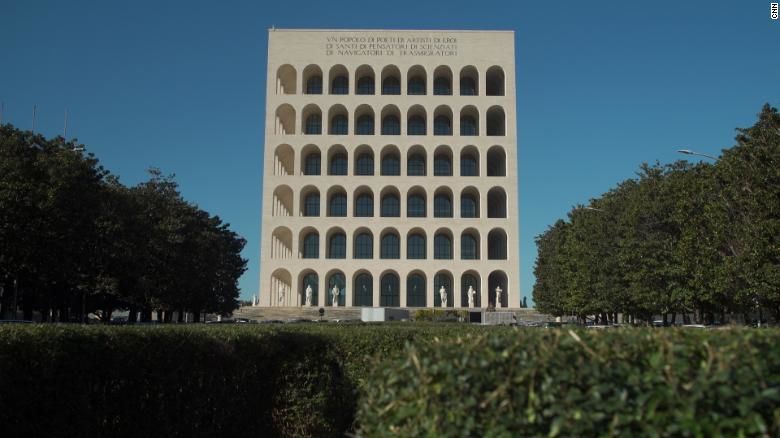 The Mussolini-commissioned building Palazzo della Civiltà Italiana is the centerpiece of Mussolini's Esposizione Universale Roma neighborhood and remains a symbol of the country's fascist era. 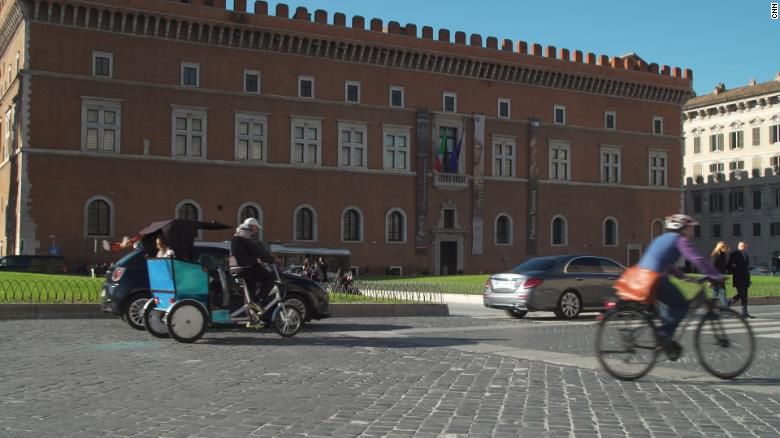 The balcony overlooking Palazzo Venezia where Fascist leader Benito Mussolini gave some of his most notable speeches.

And the Palazzo della Civiltà Italiana -- a six-storey marble tower constructed as the centerpiece of Mussolini's new neighborhood, Esposizione Universale Roma, in the city's southwest -- remains engraved with a phrase from his 1935 speech announcing the invasion of Ethiopia.

"I think the real problem with those statues is there's nothing to contextualize them ... [nothing] to tell us what fascism was about," said history professor Martin.

Martin said that while it may not be practical to tear down all of Italy's fascist-era buildings, because of the sheer numbers involved, "it should be contextualized. We need to talk about what it means."

As for the motion to ban neo-fascist groups and parties, it "would be a statement of intent by the government," said Martin, but it is unlikely to change people's ideas.