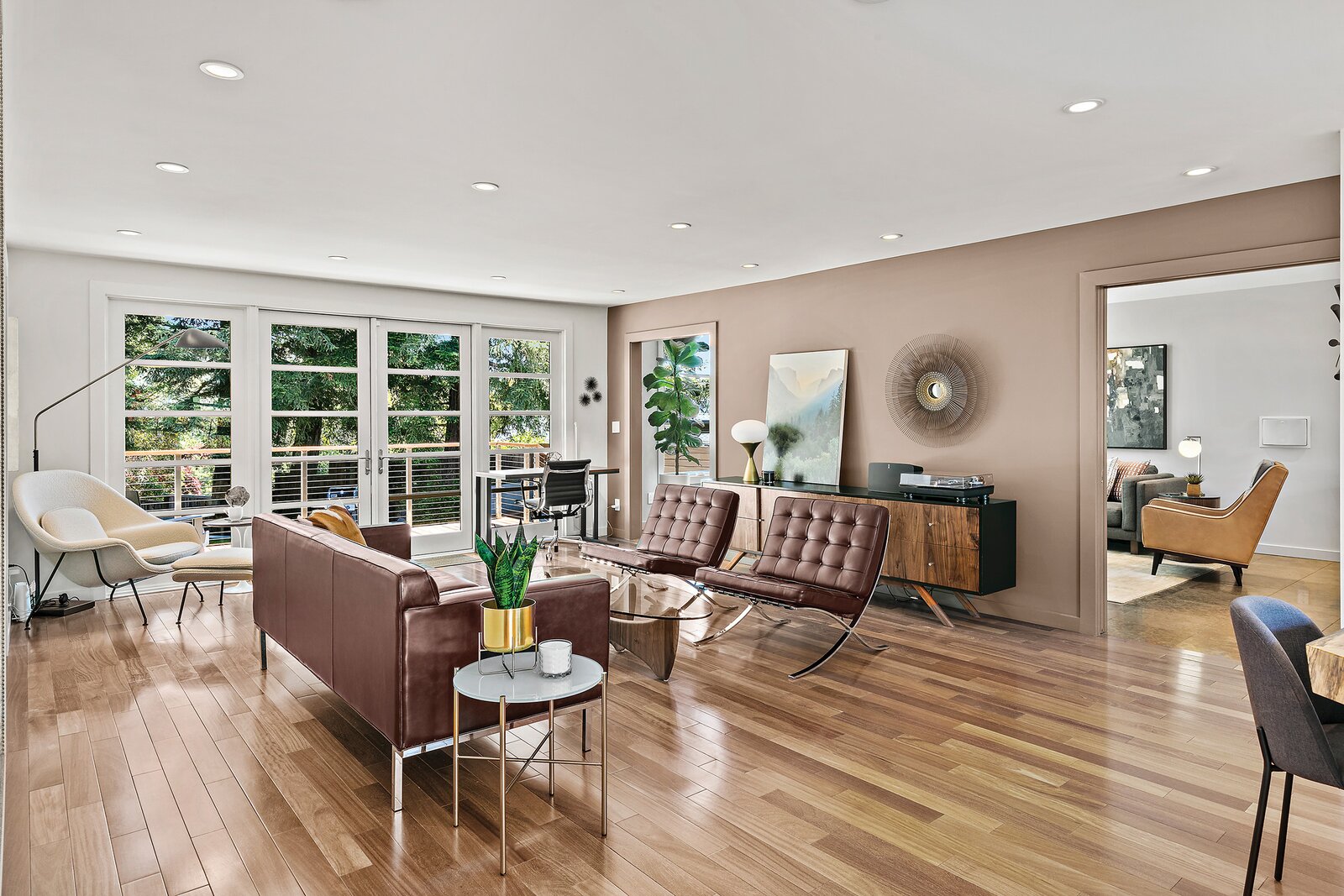 In the Bay Area, a 1950s low-rise home is adapted over time to meet its owner’s lifestyle at every turn.

"I’ve always loved the clean, refined lines, the connection to the outside, and the great, central living areas of a split-level, midcentury-modern home," says Tiffin Groff of the design vision behind her 1950s ranch-style gem in Oakland’s Redwood Heights neighborhood. Distinctive from the outside, with a crisp outline and standout fenestration, the structure has plenty of character yet it blends affably into the block. Inside the home, a neutral palette, understated furnishings, and white-framed windows give way to serene views of the surrounding redwood trees and colorful landscaping. 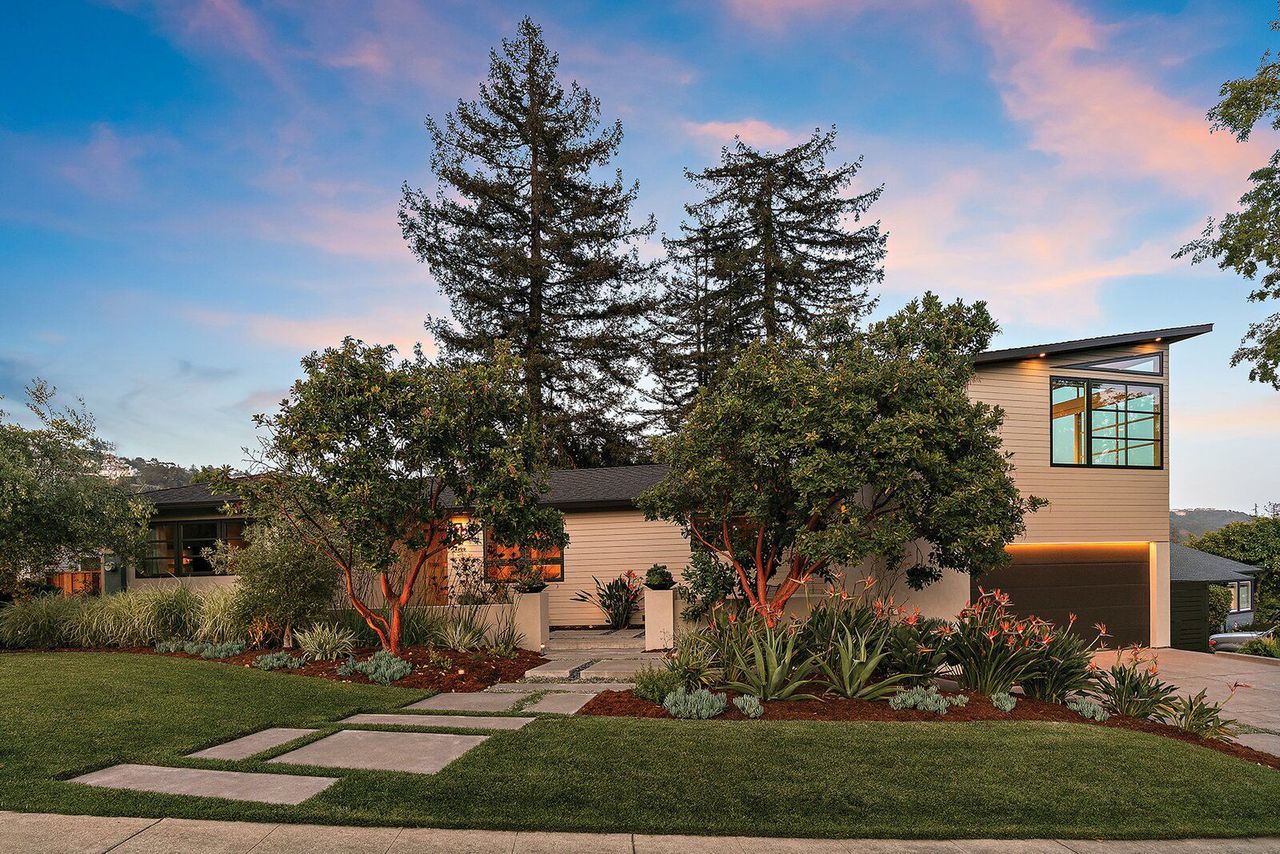 After purchasing the house in Oakland, California, owner Tiffin Groff undertook an extensive remodel that added contemporary touches inside and out-including replacing all the doors and windows with products from Kolbe’s Ultra Series.

Several years following the completion of Tiffin’s decade-long, DIY remodel to sharpen the home’s aesthetic, she found herself contemplating its functionality and considering options that would add space and flexibility to meet her family’s future needs. Enter Tiffin’s next project: building upward to create an attached but private ADU over the garage that could someday accommodate a downsize for herself, or perhaps house a renter.

Such an addition could’ve taken any form, but in the hands of Bay Area–based firm Norman Sanchez Architecture, Tiffin’s ADU became a striking extension of her home’s original vernacular, and a new focal point of the facade. 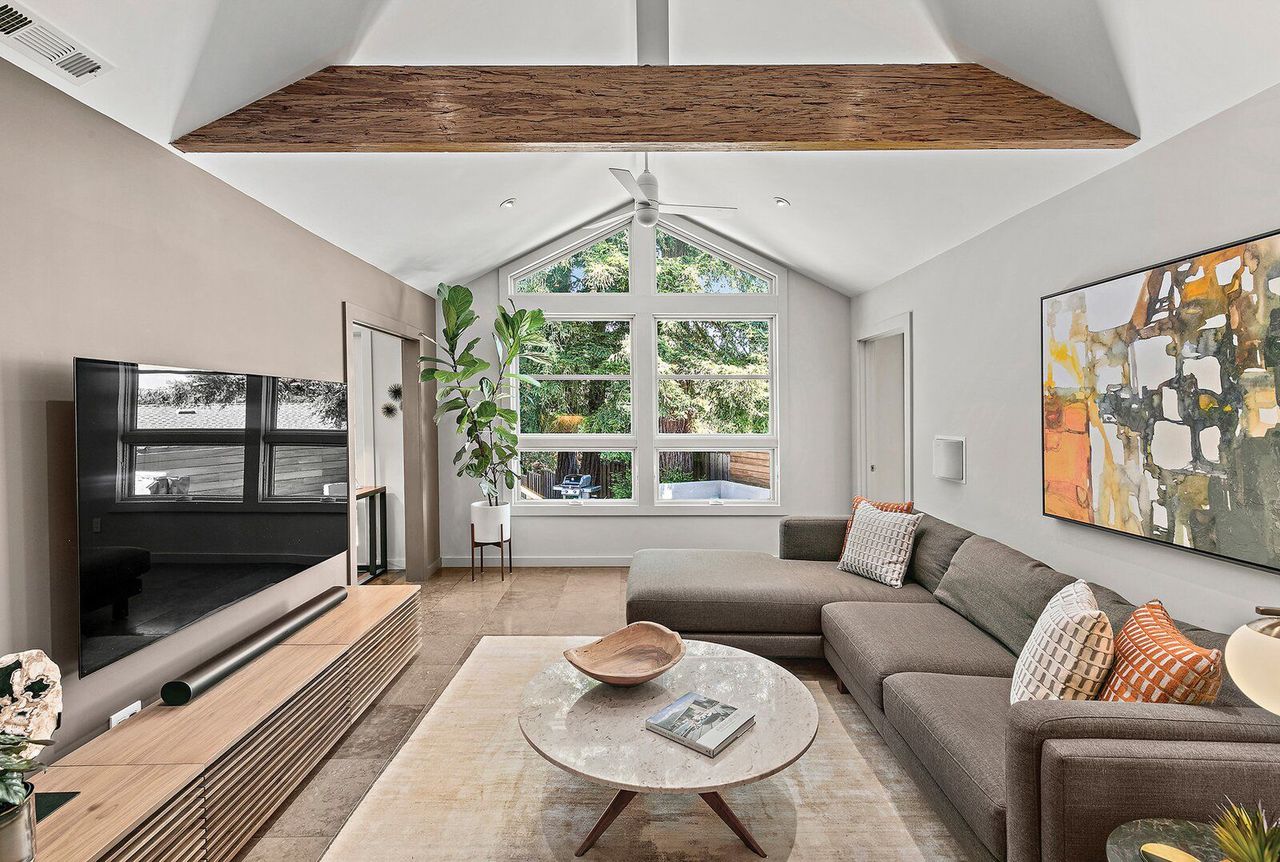 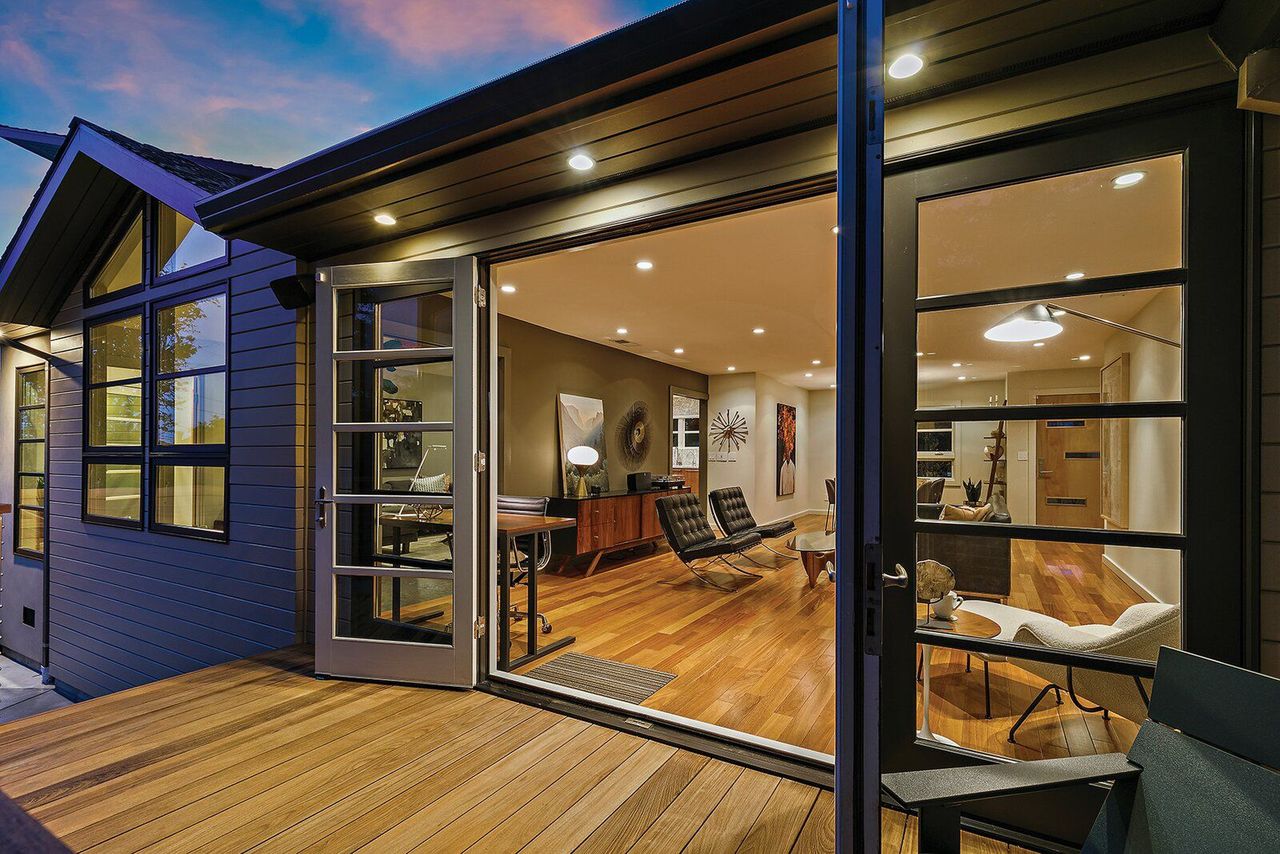 The deck off the main home’s living room is a favorite hangout. "The views were a major motivating factor," says Sanchez of his approach to designing the home’s addition.

"We wanted the ADU to feel a bit like a tree house," says Sanchez, who aptly held a meeting with the client on the rooftop of the home’s garage-where the addition would be built-in order to get a bird’s-eye view of the structure’s architectural rhythm, and to fully take in the vistas. "Norman positioned the ADU to layer into the main house nicely and capture just the right bay views," Tiffin says. 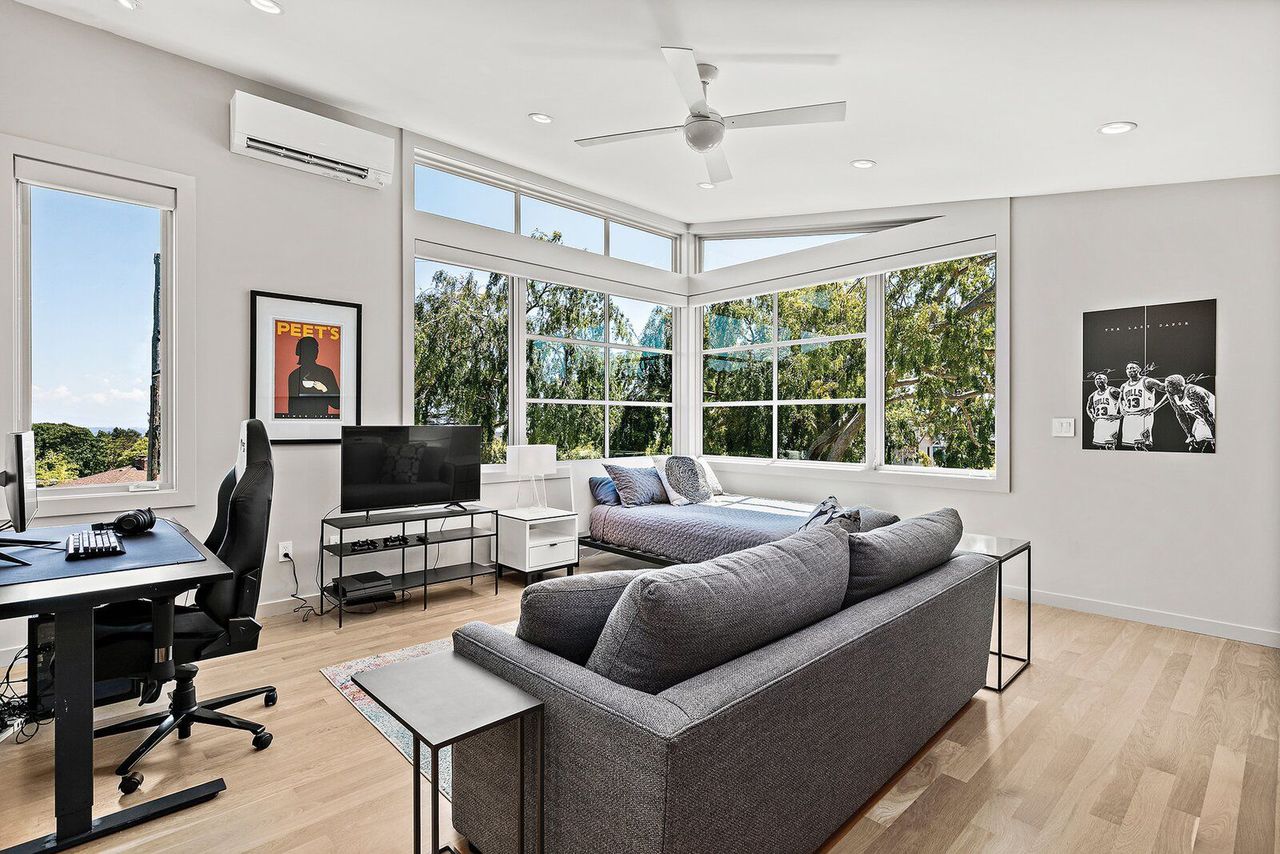 Complete with a kitchen, bathroom, and laundry facilities, the ADU opens new possibilities for the way Tiffin uses her home. The space is flooded with light year round thanks to its expansive corner windows by Kolbe, which Sanchez says were "a perfect match" for the project. "They allowed us to achieve a more contemporary aesthetic," he notes. 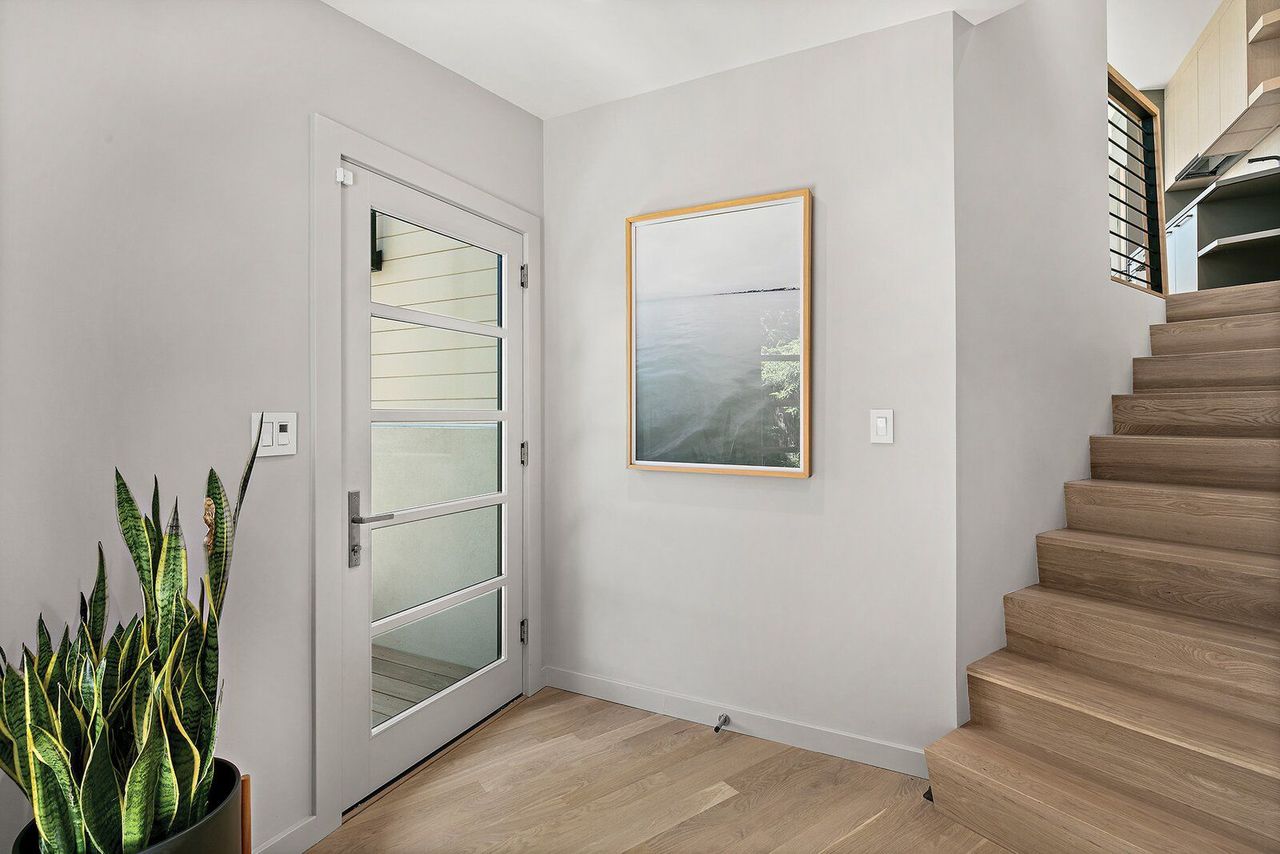 A staircase leading to the lofted ADU keeps it connected yet independent. A stylish inswing door from Kolbe’s Ultra Series helps bring natural light into the home.

The addition’s central design element-an expansive corner window with divided lite patterns-elaborates on the original home’s thoughtful fenestration. Because of the sloped ceiling, the window’s topmost glazing needed to be cut to an acute triangle in order to follow the roofline. "Kolbe was able to craft the triangular window slice to stretch the full width we wanted," says Sanchez. "I was impressed by the tight glazing, which maximizes the viewing area all the way to the corner." 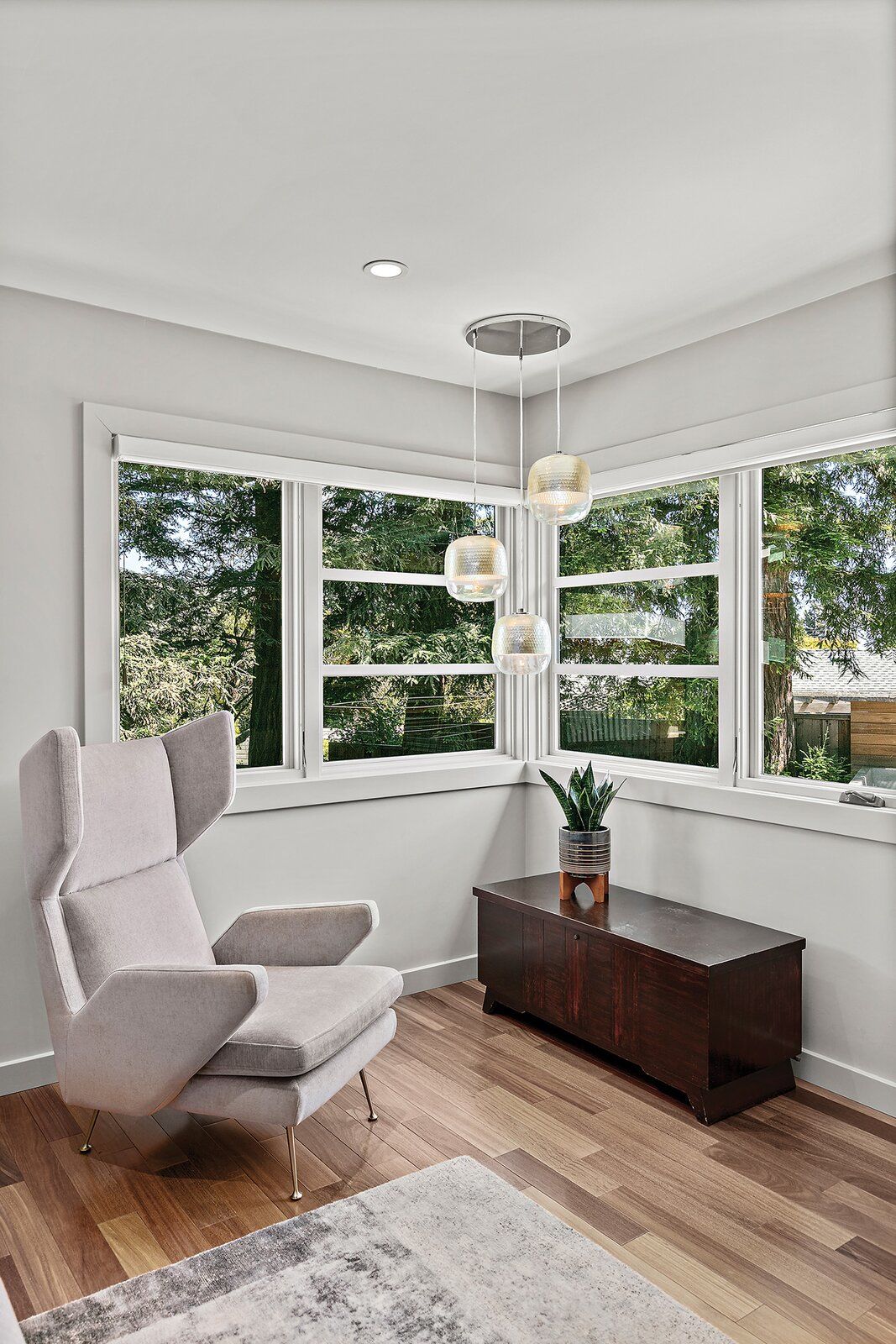 The addition’s signature corner window is inspired by the main home’s bedroom (shown), which features a smaller-scale window of similar design. 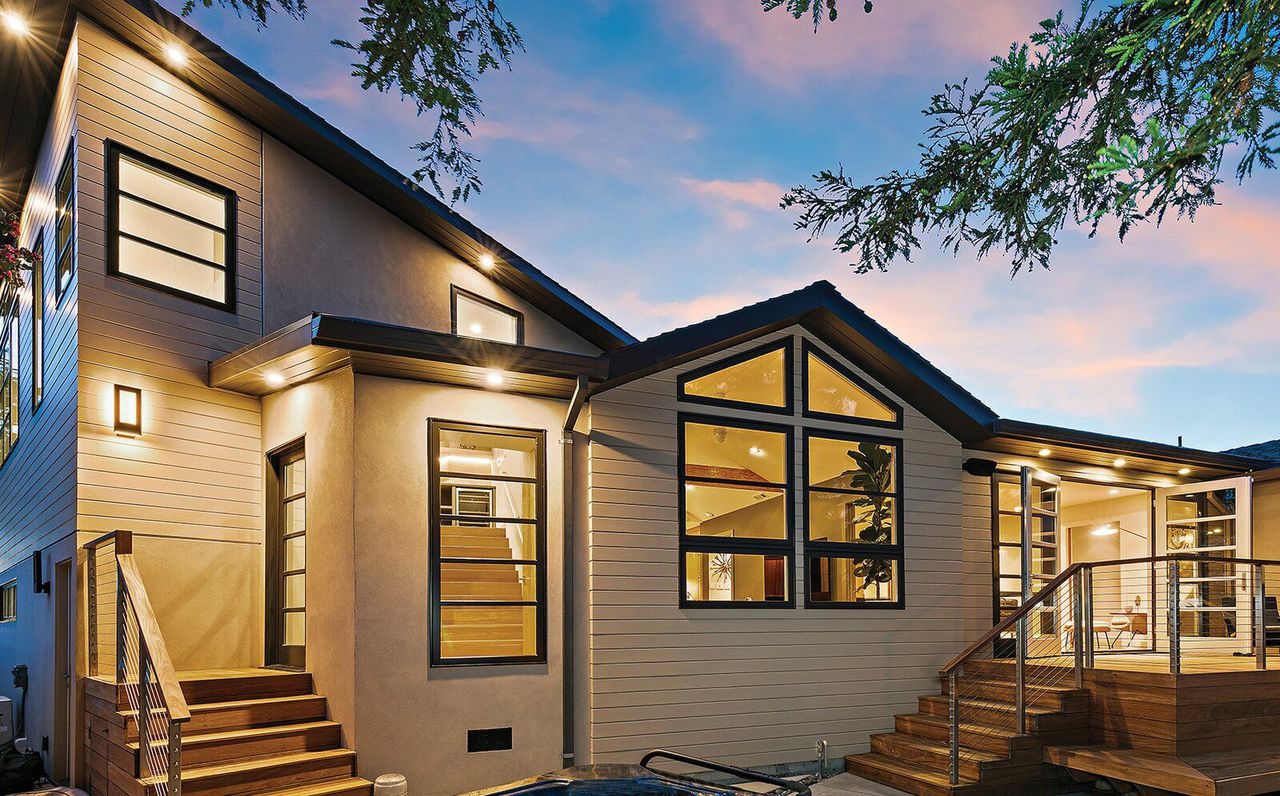 The lofted ADU strengthens the home’s original architectural personality and feels like a natural part of the structure.

Now, after carefully renovating her home twice in twenty years-once to spruce up its midcentury charm and later to add flexible living space-Tiffin finally sees a complete picture of the property. "The overall design was in my head for a long time," she says. "Sanchez helped me bring it to life." Tiffin’s real estate advisor Nathan Jines of Jines Real Estate Group says the smart renovations significantly increase the home’s market appeal, calling them "a thoughtful and significant investment."