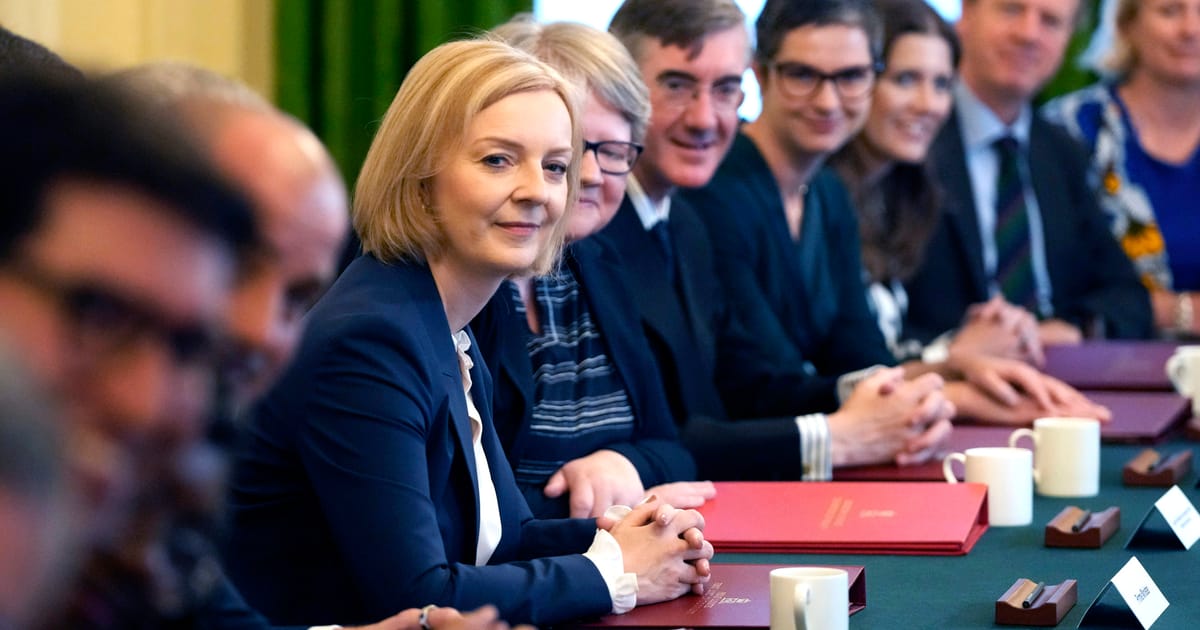 Ministers are concerned about browbeating Brits with energy demands so soon after tough COVID measures.
Liz Truss’ ministers don’t like telling Brits what to do — but measures to cut energy demand are being actively considered in her government as winter fast approaches.

With concern mounting over U.K. energy security, the risk of shortages, and the huge cost to the government of its support plans, Truss' ministers — instinctively way of state intervention — have been considering options to drive down usage, officials said.

One U.K. official said the question of demand reduction was a “continuing discussion” within government and that any measures would most likely be targeted at businesses rather than consumers.

Despite announcing a multibillion-pound market intervention to reduce soaring household and business energy bills, Truss — whose government has this week been gripped by an economic crisis — has so far refused to countenance the kind of rationing measures enacted by the EU and many member countries in response to soaring costs and supply fears.

The European Commission has asked member countries to cut gas demand by 15 percent and energy ministers will meet Friday to decide on new proposals to cut peak-hour electricity demand by 5 percent. No such measures have been announced by the U.K.

Energy analysts and MPs have called on the Truss administration to consider options including an information campaign targeted at households and businesses; obligations on landlords and households to reduce demand; or specific energy-saving targets — either voluntary or mandatory — for businesses.

A mass public information campaign — like those seen in other European countries including Germany which has outlined energy-saving tips for households — has not been completely ruled out. However, the U.K.’s new crop of libertarian-leaning senior ministers is concerned about browbeating the population into changing its behavior, so soon after the major restrictions on personal freedoms imposed during the COVID-19 pandemic.

Ed Birkett, head of energy and climate at the center-right think tank Onward — which has called for a demand-reduction strategy, including a public awareness campaign — said that while it is “understandable” ministers are reluctant to tell people to ration energy, the situation is too serious for the government not to act.

“Ministers might not want energy rationing but, in the event of shortages, it's the law of the land. Industrial and business customers would be turned off first, and then households would start to be cut off,” Birkett warned.

“It's much better to cut energy demand in a coordinated way, rather than resorting to emergency rationing measures. Those kind of emergency disconnections would have a negative impact on growth, as businesses and households wouldn't know when their energy supply would be on or off.”

Lower energy demand would also be likely to drive down the wholesale price of gas and electricity, thus limiting the cost of the government’s plans to cap average household bills at £2,500 for two years and effectively halve businesses’ energy costs for six months.

It is estimated that the final costs of the consumer plan could be as high as £150 billion over two years, while the business plan could cost between £25 billion and £40 billion. The final impact of both on the public finances will depend upon fluctuations in the wholesale price of energy.

“The price cap means that government is now on the hook for a big share of our energy bills,” said Adam Bell, head of policy at the Stonehaven consultancy and a former government adviser on energy. “Investing in reducing demand now could radically reduce this enormous liability.”

U.K. ministers have also noted demands from some Conservative MPs for more action on demand reduction, with some fearing that generous government help with energy bills will mean consumers and businesses use more energy, threatening the country’s supply.

Paul Maynard, MP for Blackpool North and Cleveleys warned earlier this month that trying to “subsidize consumption without also trying to reduce demand” would “cause immense risk of blackouts come this winter.”

Business and Energy Secretary Jacob Rees-Mogg believes that, with energy bills still twice as high as they were this time last year, domestic consumers are likely to reduce demand without the need for any government intervention. But he is more open to measures aimed at reducing businesses’ energy usage, the U.K. official said.

The tricky politics of suggesting a reduction in energy use — particularly at a time when the government's poll ratings are in free fall — will also be weighing on the minds of British ministers.

In 2013, then-Prime Minister David Cameron was forced to issue a clarification after his spokesperson suggested Brits might want put on a sweater to help lower their energy bills.
#COVID-19  #Covid
Add Comment