The UK will pay France £8m more a year under a revised deal to try to stop people crossing the English Channel in small boats.

The money will pay for increased surveillance of French beaches, while UK police officers will also be able to observe patrols within France.

It is thought French officers patrolling the coast will rise from about 250 to 350 over five months.

PM Rishi Sunak said he was "confident" the crossings could be brought down.

However, he warned there was no "single thing" that could "fix" the situation, promising "even greater cooperation" with France in the months ahead.

Labour leader Sir Keir Starmer called the deal a "small step in the right direction," but said more needed to be done to tackle people smuggling.

The government is coming under increasing pressure to reduce journeys across the Channel, which have risen to record levels this year.

More than 40,000 people have crossed in small boats so far this year, including 1,800 this weekend alone, according to official figures.

Under the new agreement, signed by Home Secretary Suella Braverman in Paris, the UK will pay France £63m this year, up from £55m last year.

*  investment in drones, night vision equipment, and CCTV in French ports to try and prevent crossings


*  investment in reception and removal centres in France

Home Secretary Suella Braverman told MPs the deal was a "very good platform" for deeper collaboration in the future.

"I'm not going to overplay this agreement," she said, adding: "Is it going to solve the problem on its own? It won't, but I do encourage everybody to support the deal we have secured."

Sir Keir Starmer welcomed the deal, but said there was "much more that needs to be done". "We need the National Crime Agency working upstream to tackle the people smuggling in the first place," he told reporters.

He also criticised the "desperate state" of asylum application processing in the UK, adding most people would be "shocked" by official figures showing that only 4% of asylum claims by migrants who crossed the Channel last year have been processed.

Franck Dhersin, mayor of Teteghem near the coastal town of Dunkirk, said the increase in crossings this year had come despite "a lot of police" watching the coast.

"We are talking about 175km of beaches and dunes, where it is very easy to hide," he told BBC Radio 4's Today programme.

Natalie Elphicke, the Conservative MP for Dover, called the new deal "more of the same," adding it "falls far short of what is needed".

"The only thing that will tackle this issue is making sure that the boats are stopped in France before they get in the water," she added.

The Refugee Council and Amnesty International UK called for a greater focus on increasing the number of safe and legal routes for people who want to claim asylum in the UK. 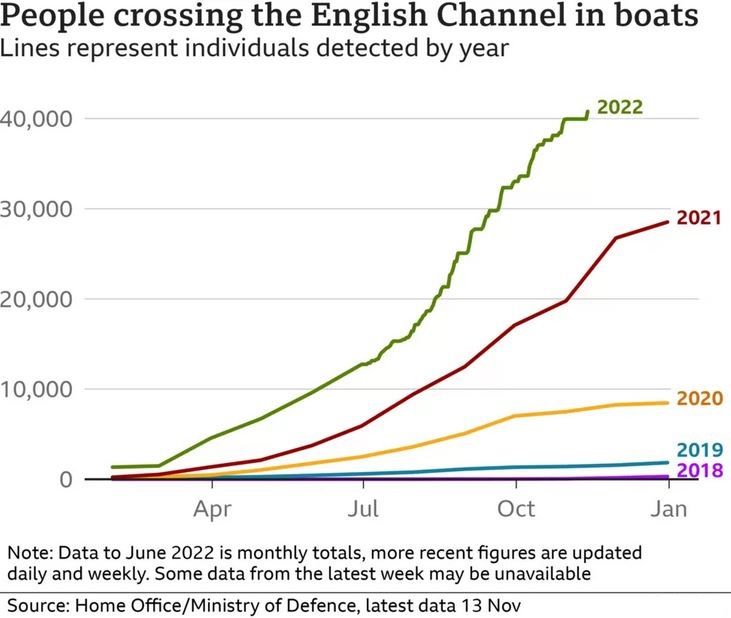 The higher numbers of migrants making the crossing this year has been partly blamed on a big rise in the number of Albanian nationals making the journey.

The deal comes after weeks of criticism aimed at the government for severe overcrowding at the migrant processing site in Manston, Kent, and for its spending on housing for those waiting for their asylum applications to be completed.

According to the Home Office, the UK is spending £5.6m on accommodating asylum seekers in hotels. It is spending a further £1.2m a day to temporarily house Afghan refugees who fled the Taliban.

The latest government figures for the year to the end of June 2022 showed that 103,000 asylum applications were awaiting a decision.

Ms Braverman has previously admitted the system was "broken" and Mr Sunak has said not enough asylum claims were being processed.

More than 40,000 people applying for asylum have waited between one and three years for a decision on their claim, according to a Refugee Council Freedom of Information request.

It also reported that a further 725 migrants have been waiting for more than five years to have their claim processed.

It emerged last month there was severe overcrowding at Manston, with 4,000 people staying there rather than the 1,600 for which the site was intended.

Numbers have since been reduced to less than 1,600, according to immigration minister Robert Jenrick.

On Saturday it emerged people at Manston centre are to be vaccinated against highly contagious and sometimes fatal diphtheria after an outbreak. 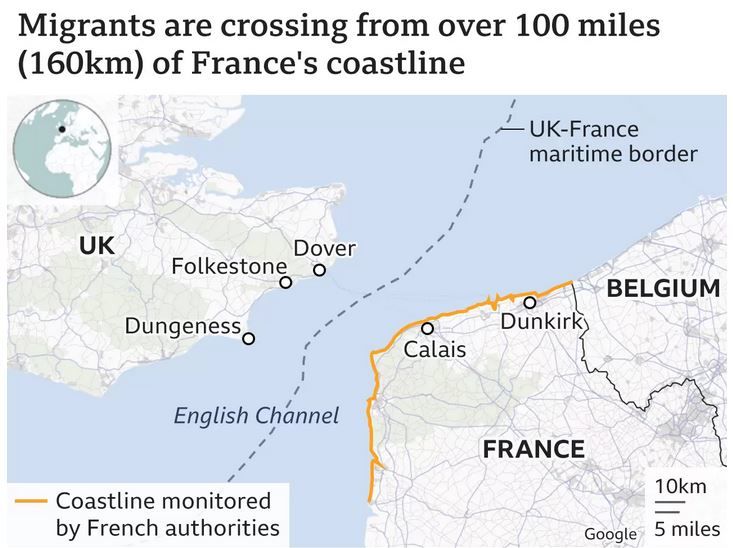