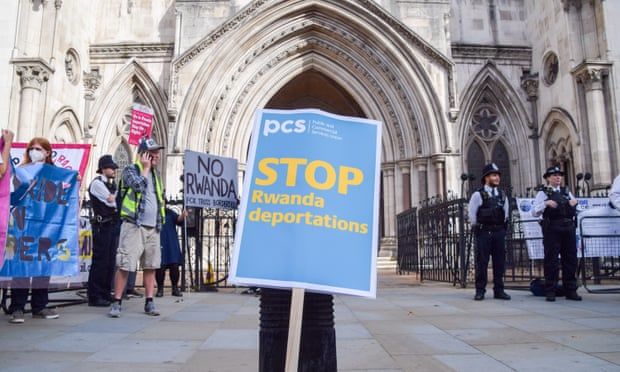 African country went back on list of destinations for ‘migration partnership’ after civil servants had ruled it out, judges hear

The UK’s plan to deport people seeking asylum to Rwanda has been challenged in the high court, with claims that ministers deliberately ignored evidence that the east African country had violated human rights, including the right to live free from torture.

Rwanda was put back on to a list of potential destinations for a “migration partnership” after previously being ruled out by civil servants, the court was told.

An extra payment of £20m was made to the Rwandan government on top of the previously announced £120m in economic development funding, it was disclosed.

The legal challenge came as the number of refugees arriving by small boats across the Channel rose to record levels. Liz Truss, who won the Conservatives’ leadership contest and will become the new prime minister on Tuesday, has pledged to stick with the policy.

Raza Husain QC, appearing on behalf of asylum seekers, along with the Public and Commercial Services union (PCS) and the groups Care4Calais and Detention Action, on Monday said the policy was “unlawful under the Human Rights Act and the common law”.

“Asylum seekers removed to Rwanda face a significant risk of violation of their rights to be free from torture and inhuman treatment,” the court was told.

In written submissions, the claimants said the home secretary, Priti Patel, and the government “including the Foreign Office and No 10 were themselves aware of, and appear to have had serious concerns, over Rwanda’s present and historic human rights record”.

Husain told the court: “Rwanda is a one-party authoritarian state that does not tolerate political opposition. It is a regime that repeatedly imprisons, tortures and murders those it thinks [are] its political opponents.

“Those who protest or dissent from government directives, including refugees, are faced with police violence. All of those observations are drawn from our own government officials.”

The Home Office is defending the claims. A spokesperson for the department has argued that Rwanda is a “fundamentally safe and secure country, with a track record of supporting asylum seekers”.

In April, Patel signed what she described as a “world-first agreement” with Rwanda in an attempt to deter people from crossing the Channel.

Nevertheless, the first deportation flight, due to take off on 14 June, was grounded after a series of legal challenges.

Documents disclosed to the claimants by the government show that in February 2021, Rwanda was not on a list of seven countries identified as potential partners in a migration deal.

However, the country was reassessed as a possible destination after the Foreign Office was told that the prime minister was “frustrated at the rate of progress”, the court heard.

An upfront £20m payment was made on 29 April 2022 to allow preparations to be made for the first removal flight, which ultimately did not take off. The extra payment was made despite the Home Office permanent secretary, Matthew Rycroft, having previously warned that there was a high risk of fraud in the Rwanda deal.

Lord Justice Lewis, sitting with Mr Justice Swift, previously said the hearing in London would start on Monday and last for five days, with a second hearing in the claim brought by the group Asylum Aid taking place in October. Both decisions are expected to be given in writing at the same time.

The court is expected to hear that the Rwanda policy’s accelerated screening process does not allow the home secretary to identify vulnerabilities and secure sufficient information on the risks faced by asylum seekers threatened with relocation.

It will also be claimed that the assessment system for UK arrivals has been set up specifically to ensure that most fail, despite legitimate claims under human rights laws.

During a previous hearing, the court was told Rwanda had initially been excluded from the shortlist of potential countries on human rights grounds.

Judges heard that in an internal note from March 2021, Foreign Office officials told the then foreign secretary, Dominic Raab, that if Rwanda was selected for the deportation policy “we would need to be prepared to constrain UK positions on Rwanda’s human rights record, and to absorb resulting criticism from [the] UK parliament and NGOs”.

In another memo, Foreign Office officials said they had advised Downing Street against engagement with several countries, including Rwanda, the court was told in written arguments.

The court also heard the UK high commissioner to Rwanda previously indicated that it should not be used for the policy, telling the government it “has been accused of recruiting refugees to conduct armed operations in neighbouring countries”.

Another official memo in April this year said the “fraud risk is very high” and there was “limited evidence about whether these proposals will be a sufficient deterrent for those seeking to enter the UK illegally”, judges were told.

The hearing began at 10am on Monday before Lewis and Swift. There were at least 40 barristers in court.

More than 20,000 people have crossed the Channel on small boats since Patel announced the agreement with Kigali. The number of arrivals by small boats this year is expected to pass the total for last year at some point this month.

In her last appearance in parliament as home secretary, Patel defended the government’s plan to send people to Rwanda, telling MPs: “This partnership is very clear in terms of standards, the treatment of people that are relocated to Rwanda, the resources that are put in and also the processing of how every applicant is treated.”