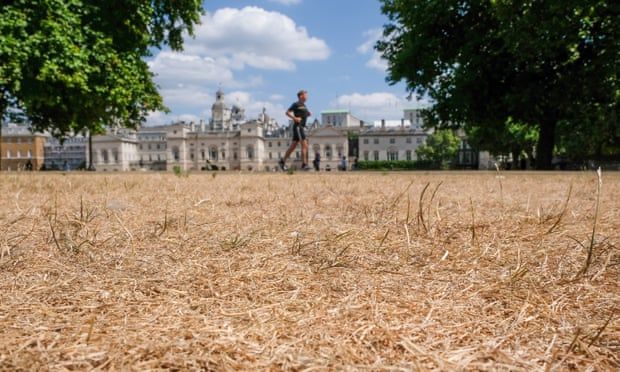 Alert comes as south-east England goes 144 days with little to no rain, the longest in half a century

The UK Health Security Agency has issued a second warning of the summer as England has been placed on a level 3 heat health alert.

The alert comes as south-east England goes 144 days with little to no rain, the longest in half a century, according to Met Office statistics. Temperatures are expected to reach the mid-30s C for the duration of the warning, from midday Tuesday to 6pm on Saturday 13 August.

While temperatures are not predicted to reach those of the level 4 alert issued last month, Dr Agostinho Sousa, head of extreme events and health protection at the UKHSA, warned: “Temperatures will feel very warm again this week, particularly in southern and central parts of the country.

“We want everyone to enjoy the warm weather safely when it arrives but remember that heat can have a fast impact on health. It’s important to ensure that people who are more vulnerable – elderly people who live alone and people with underlying health conditions – are prepared for coping during the hot weather.”

As England experiences its driest eight months from November to June since 1976, the warning comes with recommendations to avoid barbecues due to dry conditions and points to a heightened risk of wildfires like those seen in last month’s heatwave.

Green spaces across the country have become tinder-dry while Odiham, a village in Hampshire, had no rain last month, according to the Met Office. The Met Office has also identified 10 locations that have experienced less than 250mm of rain since November 2021, and George Eustice, the environment secretary, has called for hosepipe bans to be introduced with some potentially lasting until October in the worst-affected areas.

Currently, most of England is under a prolonged dry weather status and officials are expected to announce an official drought after a meeting taking place between water companies, government ministers and farmers this week.

The Met Office deputy chief meteorologist, Tony Wardle, said: “Heatwave criteria look likely to be met for large areas of the UK later this week, with the hottest areas expected in central and southern England and Wales on Friday and Saturday.

“Coupled with the high daytime temperatures will be continued warm nights, with the mercury expected to drop to only around low 20s Celsius for some areas in the south.”

In order to stay safe in the heat, the UK Health Security Agency recommends:

*  Looking out for those who may struggle to keep themselves cool and hydrated – older people who may also live alone, and those with underlying conditions are particularly at risk.

*  Checking that fridges, freezers and fans are working properly.

*  Checking medicines can be stored according to the instructions on the packaging.