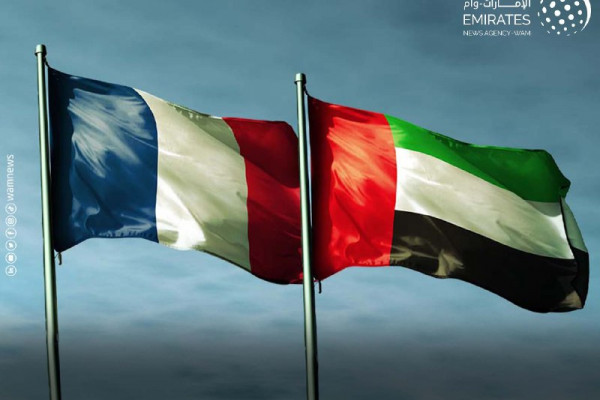 At the invitation of the President of the French Republic, Emmanuel Macron, President His Highness Sheikh Mohamed bin Zayed Al Nahyan conducted a state visit to Paris on 18th and 19th July 2022.

The President of the French Republic restated his condolences on the passing of Sheikh Khalifa bin Zayed Al Nahyan, a leader who commanded worldwide respect, and warmly congratulated His Highness Sheikh Mohamed bin Zayed Al Nahyan on his election as President of the UAE. He wished the people of the UAE continued wellbeing and prosperity under His Highness Sheikh Mohamed’s leadership. He also thanked His Highness for conducting his first state visit to France, reflecting the long-standing strategic relationship between the two countries.

The Presidents of the French Republic and United Arab Emirates commended the depth and breadth of the strategic partnership between their two countries, an alliance anchored in longstanding friendship and bilateral cooperation. They emphasised a joint commitment to expand their collaboration across all fields, working closely together to tackle global and regional challenges.

The crisis in Ukraine

Both leaders expressed deep concern regarding war in Ukraine, its terrible impact on civilians, the humanitarian situation, and its effects on commodity markets worldwide. They underscored the urgent need to intensify diplomatic efforts to reach a solution to the conflict, and His Highness commended President Macron’s continuing efforts in that regard.

Both leaders discussed a range of regional and global opportunities and challenges, and agreed to work together to find ways to mitigate the impact of these challenges on each other and globally. They agreed to establish a France-UAE Comprehensive Strategic Energy Partnership, representing a major step in fostering energy security and affordability. They also welcomed the agreement between TotalEnergies and ADNOC on fuel provision, with the aim of increasing the security of fuel supply in France.

Of equal importance, the UAE also emphasised its support for global action on food security, and to work with France to find ways to mitigate ongoing pressure on global supply chains. The UAE announced its support to the Food and Agriculture Resilience Mission (FARM) initiative, specifically on open, transparent, and resilient food trade, as well as the provision of timely and accurate information to support the Agriculture Market Information System (AMIS).

Building on the significant investment partnership agreed in December 2021, the two leaders share an ambition to further expand the vibrant economic partnership between the two countries. They expressed interest in identifying and facilitating areas of cooperation, where interests and capabilities converge.

The two sides praised the recently launched UAE-France Business Council, with a view to further increase bilateral business opportunities for the benefit of both nations. The two sides noted that the Council will serve as a tangible outlet to expand the already constructive cooperation that exists between the two countries’ business communities, and underlined their shared desire to convene the inaugural meeting of this grouping in the near future.

Both leaders noted that climate action represents an area of critical mutual concern, emphasised common and ambitious goals in this important field. President Macron congratulated the UAE for the future hosting of COP28 in 2023, and offered France’s full support, including through its expertise derived from COP21. Both sides signed an MoU on Climate Action, which will enable France and the UAE to enhance their cooperation.

The French side congratulated UAE on the successful operation of its nuclear energy programme. Both sides confirmed the important role of nuclear energy in their countries’ efforts to decarbonise their energy sectors and their resolve to continue the strong cooperation in this field, including by sharing technical expertise, the provision of technology and nuclear fuel, as well as in the area of R&D. The two sides also commended progress made in regard to the MoU on Decarbonised Hydrogen.

Both leaders agreed on the importance of the health sector as a major domain for expansion in bilateral cooperation, reflecting a mutual priority area of French and Emirati development and expertise. One example of successful collaboration is the Cardiovascular Diseases Prevention project between the Abu Dhabi Public Health Centre and Assistance Publique-Hôpitaux de Paris (AP-HP) (Iinternational). Based on the signing of the MoU in December 2020, the project was implemented by a team of French experts, who helped achieve growth, sustainable development and global competitiveness, as well as exchange of information and know-how.

Both sides welcomed the signing of a MoU on Cooperation between the Institute Pasteur and the Abu Dhabi Public Health Centre, noting that such cooperation could produce mutually beneficial outcomes. Both sides also cited the potential of higher education cooperation that focused on developing healthcare expertise.

Both leaders recognised the importance of education, culture and science as embedded in the fabric of the bilateral relationship, underscoring the contributions of existing key projects, such as the Sorbonne Abu Dhabi, and the efforts to expand cooperation in higher education, such as with Ecole 42, EM Normandie Business School, and ESCP Business School. Both sides looked forward to forthcoming projects, such as gaming school Rubika, and encouraged further endeavors involving French higher education institutions in the UAE, as well as the expansion of French language teaching in UAE schools.

The leaders discussed the exploration of new chapters in cultural cooperation, following the successful partnership of the Louvre Abu Dhabi.

Recognising that the space sector is a key driver for the advancement of science and technology, the UAE and France signed multiple agreements related to earth observation, climate change initiatives, and lunar exploration to strengthen and deepen collaboration in this critical sector.

The two leaders recognised that their strategic partnership is a critical component in their collaborative and mutual efforts to act as a beacon for peace and stability in the region, and beyond.

As the founding members of the International Security Alliance since 2017, the UAE and France reaffirmed their commitment to combatting radicalisation, extremism, and transnational crime by exchanging experiences and continuing joint operations with fellow member states.

The two leaders discussed prospects for promoting peace, dialogue and diplomacy across the region, and expressed hope that nuclear negotiations with Iran could lead to an agreement that would increase regional security. His Highness commended the successful Baghdad Conference on Partnership and Cooperation, and President Macron underscored the benefits of the Abraham Accords, which contribute to peace and prosperity in the region through building bridges and cooperation. Both leaders stressed the importance of further fostering peace and prosperity.

Looking beyond the region, the two leaders emphasised the importance of multilateralism as a way to increase mutual understanding and trust on a global scale at a time when collective cooperation is most needed. President Macron commended the UAE’s role as non-permanent member of the United Nation’s Security Council, and His Highness commended the achievements in multilateralism under the French Presidency of the European Union.

Both leaders reaffirmed their commitment to further expand and develop the historic cooperation between the two countries, to opening new domains across all areas, and to be an ever-more active force for peace and stability in the region and beyond.