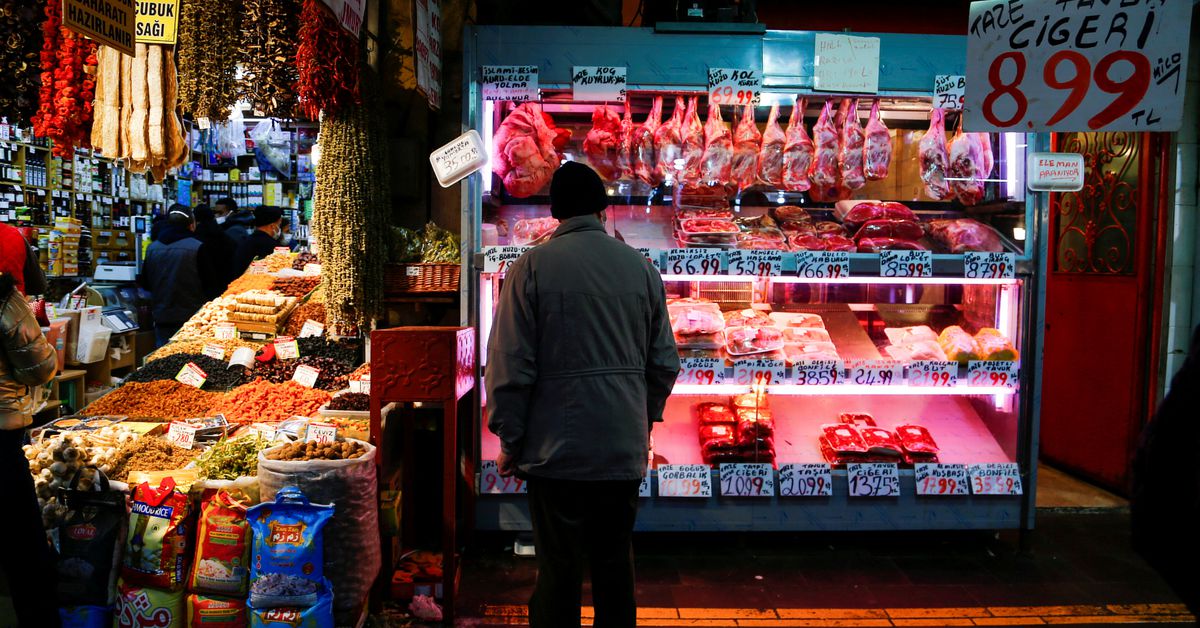 Turkey's government launched a series of steps meant to harness its banks and bond markets to cool soaring inflation and stabilise a sliding currency, doubling down on President Tayyip Erdogan's aversion to raising interest rates.

While the Treasury said fighting inflation remained its "top priority", some analysts said the measures - announced late Thursday and in the early hours of Friday - would do little to relieve an economy saddled by high living costs.

Among the steps, the Treasury said it would issue domestic bonds indexed to the revenues of state enterprises to spur lira asset savings, the central bank raised the required reserves ratio for lira commercial cash loans to 20% from 10%, and the banking watchdog tweaked a maturity limit for consumer loans.

"All of our institutions are acting with the understanding of a joint struggle," the Treasury said.

In response to the coordinated steps, the lira initially rallied then skidded to settle at 17.06 to the dollar, near its lowest since a currency crisis in December. It has shed 23% this year after dropping 44% last year.

Taken together, the steps aim to boost individual Turks' lira confidence and holdings while also cooling some forms of credit growth, which helped push inflation to a 24-year high above 73% last month.

The inflationary spiral was precipitated by a series of central bank interest rate cuts carried out late last year under pressure from Erdogan, who says the monetary stimulus is needed to boost exports and investments ahead of elections in mid-2023.

Analysts were sceptical how much the latest steps could move the needle given they skirted the need to raise rates and could prove costly for the state.

"There isn't any policy change available to take inflation under control," said Arda Tunca, Istanbul-based economist and columnist at PolitikYol. "All these schemes cause the Treasury to shoulder the burden of yields to be paid to investors."

Earlier this week, sources told Reuters the government was considering pushing a supplementary budget through parliament before a recess next month to cover possible summer payments.

The lira crisis has driven up import prices, a trend exacerbated by Russia's war in Ukraine that hiked Turkey's energy and food import bills.

"So far I have not seen anything that would help stabilise the lira," said Per Hammarlund, chief EM strategist at SEB. "Erdogan seems to be stuck on those low interest rates."

The economic turmoil has hit Erdogan's approval ratings ahead of the presidential and parliamentary elections.

Turks like Onder Ozturk, 42, a barber in Istanbul, have borne the brunt of soaring prices.

"We never go out to eat anymore," said Ozturk, who has cut discretionary spending by half, including visits to his home town. "We've limited our spending to clothes and personal needs."

The Treasury said free market rules would not be compromised by the steps meant to boost the lira's appeal.

Commenting on the move to issue revenue-index lira bonds this month, Spinn Consulting's Ozlem Derici Sengul noted that such debt was issued in 2009.

"Not corporates but only real persons are targeted this time, but...it is difficult to attract deposit holders who do not have equity investing experience," she said.

The central bank said lenders must hold between 3% and 10% of fixed-rate bonds for foreign currency deposit accounts. A senior banker told Reuters this would lift demand for fixed-rate bonds and effectively lower the Treasury's borrowing costs.

In other moves, the banking watchdog reduced the maximum maturity for consumer loans over 100,000 lira ($5,814) to 12 months from 24, and plans to ease restrictions imposed on foreigner investors' access to the lira via the swap facility.