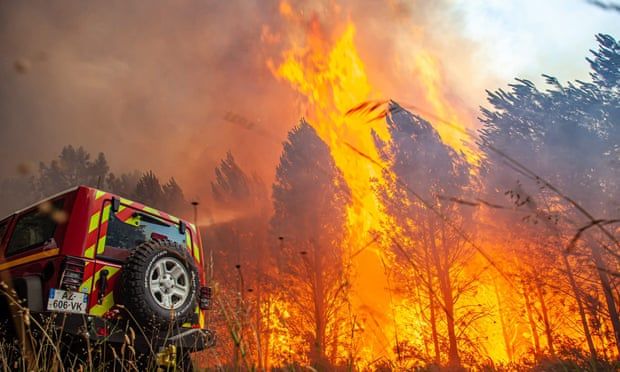 Huge wildfires swept across western Europe on Saturday, destroying swathes of land and forcing thousands from their homes amid a record-breaking heatwave that shows no signs of easing.

Firefighters were battling to bring blazes under control in parts of France, Spain and Portugal, with blistering summer temperatures that have allowed them to flourish expected to continue this week.

In the region of Gironde in south-western France, more than 12,000 people were evacuated as strong winds frustrated efforts to contain a fire that raced across pine forests.

“We have a fire that will continue to spread as long as it is not stabilised,” said Vincent Ferrier, deputy prefect for Langon in Gironde.

One resident living near La Teste-de-Buch in Gironde described the conditions as “post-apocalyptic”.

“I’ve never seen this before,” she told news agency AFP.

In neighbouring Spain, firefighters were battling a series of fires after days of unusually high temperatures which reached up to 45.7C. 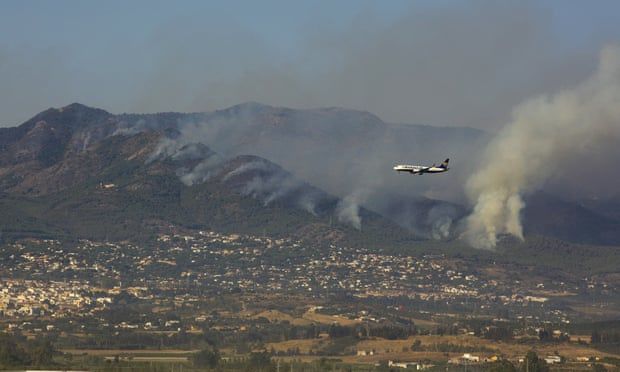 A Ryanair plane flies over a forest fire on the Mijas mountain range in Spain on Saturday, where more than 3,000 people were evacuated.

In the south of the country, near the Costa del Sol, more than 3,000 people were evacuated from their homes due to a large wildfire near the town of Mijas. Many were taken to shelter in a sports centre, emergency services said.

“The police drove up and down the road with their sirens on and everyone was told to leave. Just leave. No instructions where to go,” British pensioner John Pretty, 83, said.

Ashley Baker, a Briton who lives in Mijas, told the BBC: “There are about 40 houses in our area. Everyone was really nervous and standing outside or on balconies watching it.”

Holidaymakers on the beach in Torremolinos described soaring plumes of smoke rising in the hills, where several aircraft were tackling the blaze.

Some of the worst fires have been in Portugal, where the pilot of an aerial fire-fighting plane died on Friday when his plane crashed while on an operation in the Foz Côa area, near the Spanish border.

It was the first fatality from wildfires in Portugal so far this year, which have injured more than 160 people this week and forced hundreds to be evacuated.

Portugal’s health ministry said 238 people had died as a result of the heatwave between 7 and 13 July, most of them elderly people with underlying conditions. 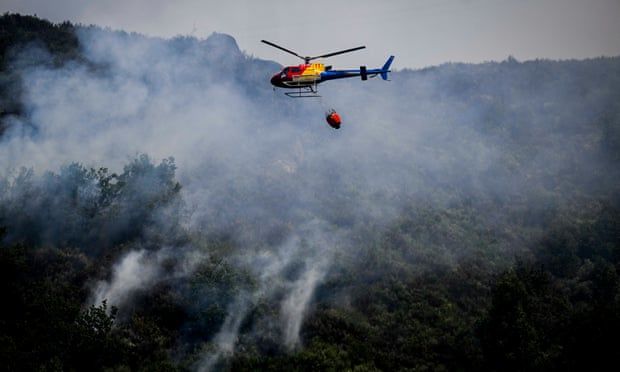 A firefighter helicopter flies over a wildfire near Bustelo village in Amarante, in the north of Portugal, on Saturday.

There was some respite on Saturday for firefighters in Portugal, where temperatures dropped slightly across most of the country after reaching about 40C in recent days.

“We have had big fires and we don’t want them to be reactivated again … We will keep extreme vigilance this weekend,” emergency and civil protection authority commander Andre Fernandes told reporters.

Fire season has hit parts of Europe earlier than usual this year after an unusually dry, hot spring that left the soil parched.

The fires have been fanned by extreme temperatures which experts attribute to climate change. Croatia and Hungary have also fought wildfires this week, as have California and Morocco.

In Portugal a total of 39,550 hectares (98,000 acres) was ravaged by wildfires from the start of the year until mid-June, more than triple the area in the same period last year, data from the Institute for the Conservation of Nature and Forests showed.

An area equivalent to almost two-thirds of that has burned during fires in the last week.