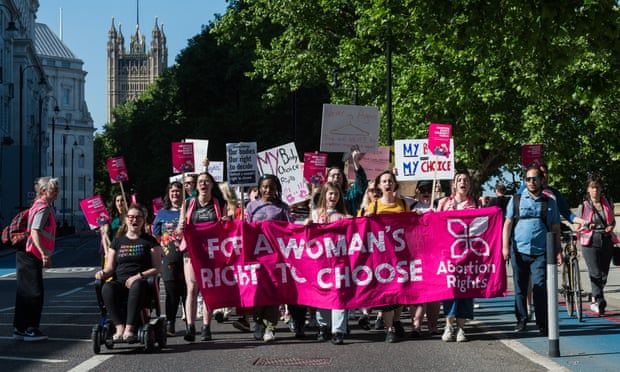 Vulnerable women are being imprisoned for ending pregnancies in Britain. It’s time to legalise abortion, says barrister Charlotte Proudman
Like many people in Britain, you probably watched with horror the US supreme court’s reversal of Roe v Wade, thinking, “Thank goodness women could never be prosecuted for having an abortion here.”

But let me tell you, it already happens here.

Two women are currently awaiting criminal trial in England for abortion-related offences, both facing charges that carry a maximum sentence of life. At least 17 women have been investigated by police over the past eight years for having had abortions.

In Oxford, a 25-year-old mother of one is facing trial for allegedly taking the drug misoprostol – one of the two pills routinely prescribed by doctors to abort a pregnancy. But her baby was born alive and she was subsequently reported to the police. She is being charged under the Offences Against the Person Act, a law passed by parliament in 1861, before the invention of the lightbulb and before women had the right to vote. The law states that a woman must be “kept in penal servitude for life” if she procures an abortion.

Another woman is facing trial after she took abortion pills she obtained from the British Pregnancy Advisory Service (BPAS) by post when rules were relaxed during the pandemic to allow this. She was allegedly 28 weeks pregnant at the time and is facing charges of “child destruction” (note the visceral language) under the Infant Life (Preservation) Act from 1929, which also comes with a maximum life sentence. She could spend the rest of her life in prison.

We so often think that the 1967 Abortion Act legalised abortion. But it did no such thing. It partially decriminalised abortion in England, Scotland and Wales, so long as strict conditions were in place, such as a confirmation from two medical practitioners that the pregnancy had not exceeded 28 weeks (subsequently reduced to 24 weeks in 1990), or that the termination was necessary to prevent injury or mental harm. Any abortion outside these criteria is still a criminal offence.

We know that it is overwhelmingly vulnerable women who are investigated and prosecuted for having abortions. One woman collapsed in the dock when she was sentenced to two and a half years in 2015 for taking tablets she had bought online to induce a miscarriage after the 24-week period of gestation. The court heard that she had “a history of emotional and psychological problems”.

Another woman, a mother of one, ordered pills online to induce an abortion in 2019 after her abusive boyfriend had told her not to go to the doctor. She had believed she was eight to 10 weeks pregnant but after a traumatic miscarriage in her bath tub, where she has described sitting in an inch of blood, she realised her pregnancy had been much further along. She was arrested in her hospital bed and served two years in prison.

These are just some examples of women who have faced trial: there are multiple other women who face gruelling police investigations. In 2021, a 15-year-old girl was investigated for a year after suffering an unexplained stillbirth. Her phone and laptop were confiscated during her GCSE exams, she was self-harming, and the investigation only ended after a coroner concluded that the pregnancy ended due to natural causes. Another woman was arrested in hospital last year and kept in a prison cell for 36 hours after a stillbirth at 24 weeks, and is now suffering PTSD. My question is this: if a woman has had an abortion late in the gestation period, or a traumatic miscarriage or stillbirth, should she go to prison or should she be offered support from medical practitioners at what is clearly a horrendous time, both mentally and physically?

Women in 2022 are being shackled by a 160-year-old law made at a time when we were not even allowed to set foot in the House of Commons. Urgent reform is needed to protect more women from harm, which is why organisations such as BPAS and the Royal College of Obstetricians and Gynaecologists (RCOG) are calling on the director of public prosecutions for England and Wales, Max Hill QC, to drop all charges against these women. The RCOG this month has gone further, calling on ministers to finally legalise abortion. There is absolutely no public interest in sending vulnerable women to prison for terminating pregnancies. Instead, these prosecutions will only serve to put off women seeking help from doctors because they might get arrested, pushing more women into unsafe and underground options.

Meanwhile, according to the criteria of the Abortion Act, a woman has to show that she would suffer grave permanent injury to her mental health if she did not have an abortion after 24 weeks. Why should women still have to pathologise themselves as mad, hysterical, unfit or suffering to legally access healthcare?

The state currently has a triple lock on women’s bodies. By not legalising abortion it has the right to force pregnancy, birth and motherhood upon us. Look to the rules on organ donation: it is illegal to donate people’s organs after they die (however desperately they are needed by people on waiting lists) without their permission. The law at present, which denies women the right to abort a pregnancy on their own terms, is to give us less autonomy than a corpse.
Add Comment