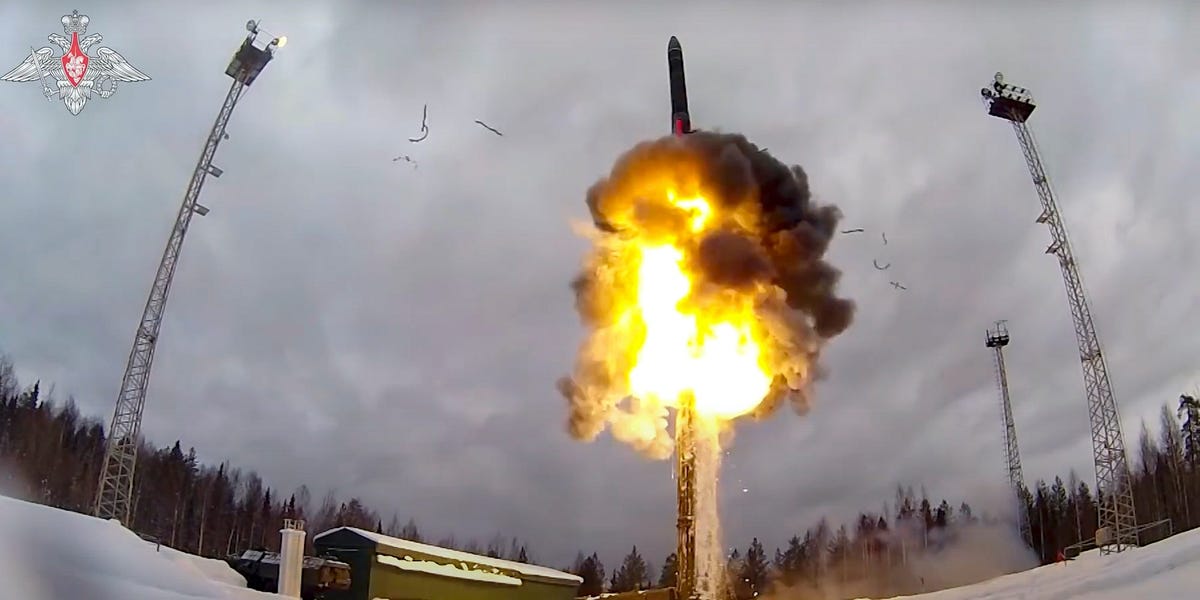 The UN has said nuclear war is 'back within the realm of possibility.' Here are the places in the US most likely to be hit in a nuclear attack.

An Insider map shows the essential points Russia would have to attack to wipe out the US's nuclear forces, according to a nuclear weapons expert.

The UN secretary-general said that nuclear war is "back within the realm of possibility" following Russia's warning earlier this year it was putting its nuclear forces on alert amid its war in Ukraine, which threatens to draw NATO into direct combat with Russia. Since then, nuclear threats have continued to raise concerns a nuclear weapon could be used in a conflict for the first time in decades.

Much of the focus as of late has been on the risk of Russian President Vladimir Putin using a nuclear weapon in Ukraine in a desperate move to change his army's forturnes on the battlefield, but the Russian leader has also directed warnings at the US and NATO.

In December, Putin also suggested that Russia may abandon its "no first use" military doctrine, which says Russia would only use nuclear weapons as a last resort.

"They [the US] have it in their strategy, in the documents it is spelled out – a preventive blow," Putin said at a news conference in Kyrgyzstan. "We don't. We, on the other hand, have formulated a retaliatory strike in our strategy."

"So if we're talking about this disarming strike, then maybe think about adopting the best practices of our American partners and their ideas for ensuring their security," he added. "We're just thinking about it."

While the risk of tensions between the US and Russia escalating to open conflict and nuclear war is low, the threat exists.

In 2017, Russian state media detailed how Moscow would annihilate US cities and areas after a nuclear treaty collapsed and put the Cold War rivals back in targeting mode — a shocking threat even by the Russian regime's extreme standards.

Hyping up a then-new hypersonic nuclear-capable missile, Russian state TV said the Pentagon, Camp David, Jim Creek Naval Radio Station in Washington, Fort Ritchie in Maryland, and McClellan Air Force Base in California, would be targets, according to Reuters.

But the latter two have been closed for over two decades, making them strange choices for targets.

With most everything from Russia or its heavily censored media, it's best to take its claims with a grain of salt. Instead of taking Russia's word for it when it comes to nuclear targets, Insider got an expert opinion on where Moscow would likely try to strike.

Since the Cold War, the US and Russia have drawn up plans on how to best wage nuclear war against each other, and while large population centers with huge cultural impact may seem like obvious choices, strategists believe a nuclear attack will focus on countering the enemy's nuclear forces — destroying them before they can counter-attack.

According to Stephen Schwartz, the author of "Atomic Audit: The Costs and Consequences of US Nuclear Weapons Since 1940," as the Cold War progressed and improvements in nuclear weapons and intelligence-collection technologies enabled greater precision in where those weapons were aimed, the emphasis in targeting shifted from cities to nuclear stockpiles and nuclear war-related infrastructure.

This map shows the essential points Russia would have to attack to wipe out the US's nuclear forces, according to Schwartz: 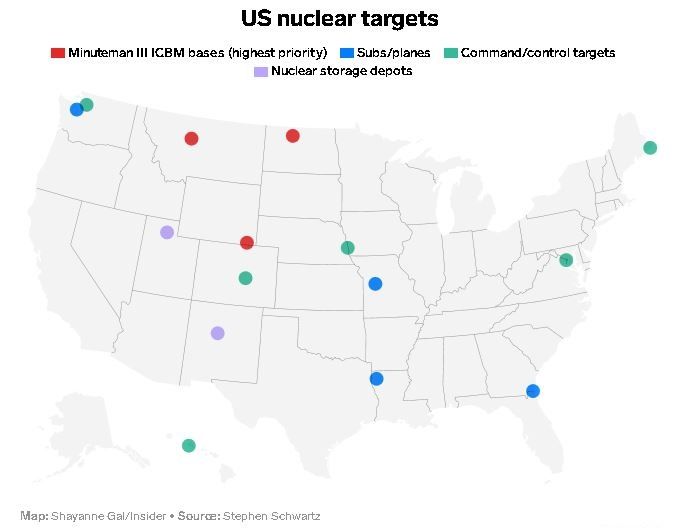 The map represents targets for an all-out attack on the US's fixed nuclear infrastructure, weapons, and command-and-control centers, but even a massive strike like this wouldn't guarantee anything.

"It's exceedingly unlikely that such an attack would be fully successful," Schwartz told Insider. "There's an enormous amount of variables in pulling off an attack like this flawlessly, and it would have to be flawless. If even a handful of weapons escape, the stuff you missed will be coming back at you."

Even if every single US intercontinental ballistic missile silo, stockpiled nuclear weapon, and nuclear-capable bomber were flattened, US nuclear submarines could — and would — retaliate.

According to Schwartz, at any given time, the US has four to five nuclear-armed submarines "on hard alert, in their patrol areas, awaiting orders for launch."

Even high-ranking officials in the US military don't know where the silent submarines are, and there's no way Russia could chase them all down before they fired back, which Schwartz said could be done in as little as 5 to 15 minutes.

But a strike on a relatively sparsely populated area could still lead to death and destruction across the US, depending on how the wind blew. That's because of fallout. 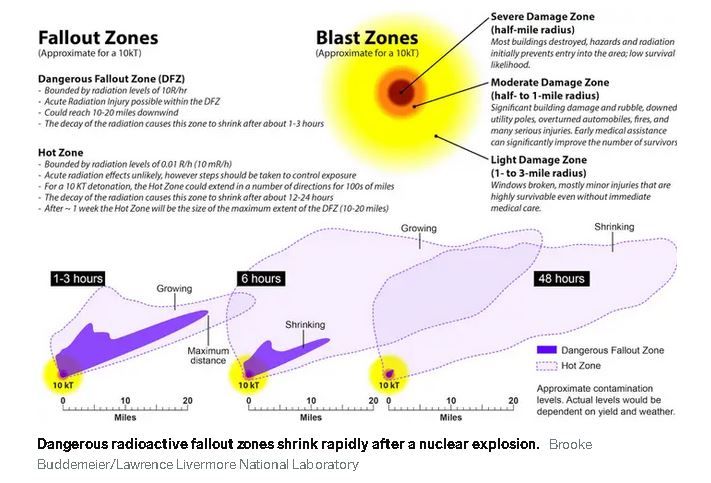 The US has strategically positioned the bulk of its nuclear forces, which double as nuclear targets, far from population centers. But if you happen to live next to an ICBM silo, fear not.

There's a "0.0% chance" that Russia could hope to survive an act of nuclear aggression against the US, according to Schwartz. So while we all live under a nuclear "sword of Damocles," Schwartz added, people in big cities like New York and Los Angeles most likely shouldn't worry about being struck by a nuclear weapon.

Brad 32 days ago
Russia has and will track and trace every politician.
Everyone who has taken part of this operation against Russia has been traced traced lassoed into mini Hypersonic nukes cannot wait for the cowards in DC to step up have their life sucked out of themselves and their families.
Good riddance parasite politicians