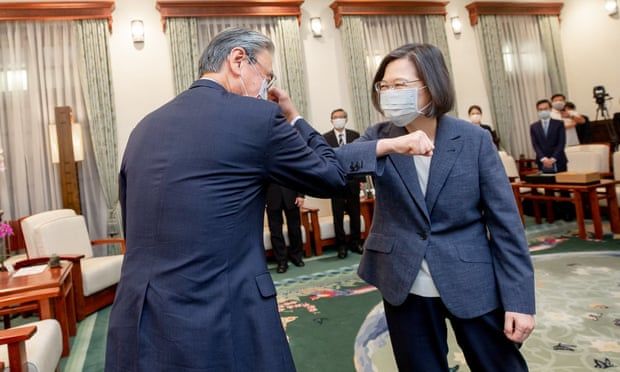 The Pelosi effect: foreign delegations queue up to visit Taiwan in defiance of China

Since the US speaker’s visit, groups from the US, Japan and Lithuania have arrived in Taipei, vowing they won’t be bullied by Beijing – and more are coming

Late on Thursday evening a US air force plane touched down at Taiwan’s Songshan airport. Unannounced, it attracted a fraction of the fanfare that greeted the plane carrying US speaker Nancy Pelosi three weeks earlier, but was still broadcast live on television. Traveling solo, senator Marsha Blackburn stepped onto the dark tarmac where she was met by a foreign ministry official, and they quickly moved inside the terminal.

“I just landed in Taiwan to send a message to Beijing – we will not be bullied,” Blackburn tweeted.

The solo visit by Blackburn was the fourth US delegation to Taiwan since Pelosi’s landmark visit, coming a few days after Indiana governor Eric Holcomb and a cross-party Japanese delegation, and just weeks after an 11-member delegation from Lithuania.

Shortly before his arrival, Keiji Furuya, a member of Japan’s ruling Liberal Democratic party, tweeted: “China’s military provocations and other erratic behaviour pose a risk to the peace and safety of not only Taiwan, but east Asia as a whole.”

The run of foreign dignitaries visiting Taiwan has kept attention on the island in the wake of Pelosi’s trip and continued to draw vituperation from Beijing. Taiwan’s government has welcomed them all, grateful for the international support and solidarity against the Chinese government’s threats to annex it by force. 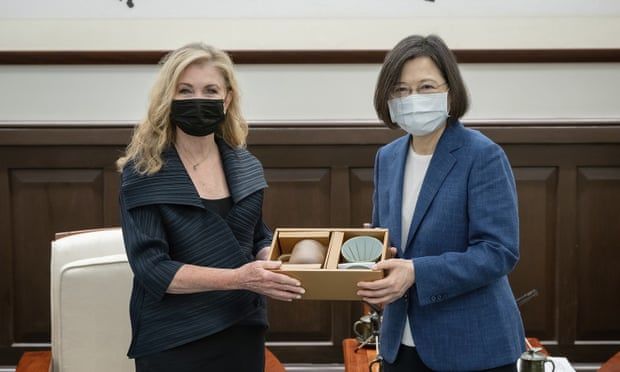 “These warm acts of kindness and firm demonstrations of support have reinforced Taiwan’s determination to defend itself,” said Taiwan’s president, Tsai Ing-wen, at a formal meeting with Blackburn on Friday.

The Pelosi visit in early August sparked a furious reaction from Beijing, which quickly announced an unprecedented run of live-fire military drills encircling Taiwan’s main island. It targeted Taiwan with missile tests, median line incursions by hundreds of warplanes and ships, disinformation and cyber attacks, and blockade-style interruptions of Taiwanese shipping ports and aerial traffic. Beijing’s moves have created a more hostile “new normal” in the strait, but they have not deterred Taiwan, or its allies.

On Friday Taiwan’s foreign minister, Joseph Wu, said the military exercises “will not stop Taiwan from seeking support internationally”. “What China wants to do is cut Taiwan off from international connections, so if one day it attacks Taiwan, there will be no support for Taiwan,” he said.

But with China ratcheting up aggression and shifting the goalposts on the tentative status quo in the Taiwan Strait, analysts have warned foreign allies must quickly close the gap between these symbolic acts and the substantive support needed to actually ensure Taiwan’s security.

“A lot of what’s happening is symbolic. I don’t want to suggest it’s not important – it can have substantive effect,” said Raymond Kuo, a political scientist at the Rand Corporation.

“But in terms of Taiwan’s ability to defend itself [and] diversify its economic ties away from China … those policies haven’t been put in place yet. They’re coming down the pipe which is positive, and I think China’s action has spurred on unity in Congress and support from other countries.”

China’s ministry of foreign affairs accused the foreign delegations of violating its domestic “one China” policy, and threatened undefined “resolute and forceful measures” in response. Analysts have debated whether the visits are needlessly exacerbating tensions. But they continue; parliamentarians from the UK, Germany, Denmark, Canada and Australia are reportedly planning trips to Taipei.

Amanda Hsiao, senior analyst with the International Crisis Group, said there would be more symbolic visits as western politicians “increasingly view a visit to Taiwan as an opportunity to signal their anti-China bona fides for domestic political reasons”.

But Kuo says the fact both sides of Congress are now largely united over Taiwan will have tangible benefit for Taiwan when it comes to passing supporting legislation.

As China’s drills drew to an end, the US announced the beginning of bilateral trade talks with Taiwan, which Washington’s assistant secretary of state for east Asia, Daniel Kritenbrink, said would provide “an opportunity to assist Taiwan in building its resilience, and ensuring … supply chains”. . Other trade deals have been signed on the sidelines of visits.

Wu said the trade talks were “exactly what Taiwan needs”. But it also needs more weapons.

Wu is adamant that Taiwan can’t expect other nations to come to its aid if it isn’t prepared to defend itself. This week the defence ministry announced a budget increase of almost 14%.

More visits are coming. This week a Canadian parliamentary “friendship group” said it was planning to visit in October, prompting renewed threats from Beijing.

Wu said Taiwan would not “bow to pressure” from China and neither should foreign visitors.

“We will not stop making friends just because of the Chinese threat to Taiwan,” he said. “There are more people than ever who want to come and show their support for Taiwan. I can tell you there will be more.”